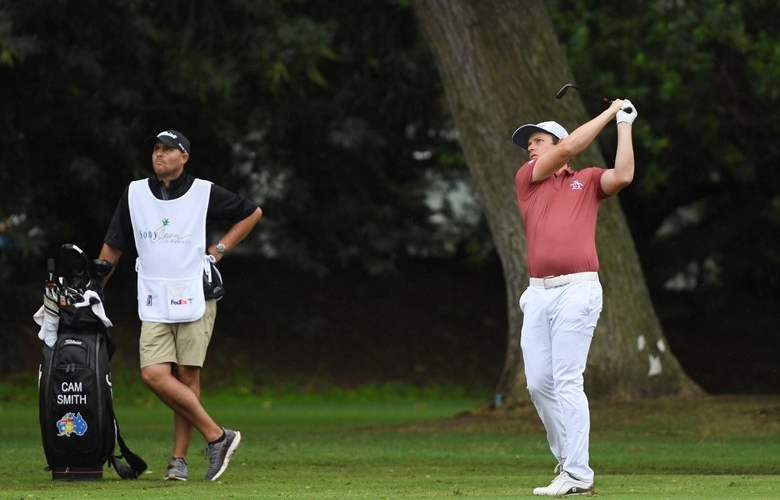 (Photo by Harry How)

By Alex Myers
Cameron Smith’s Sony Open win came under some unusual circumstances—and we’re not just talking about that wild, plodding final hole of regulation that took some 40 minutes to finish.

While the squeegeeing of the 18th green and a lost shot off a scoreboard understandably grabbed most of the attention, Smith found an unlikely recipe for success on the PGA Tour by winning despite posting a negative strokes gained approach (-.209) for the week. According to 15th Club’s head of content, Justin Ray, this marks just the 22nd time that’s happened in the 611 tournaments that have tracked strokes gained statistics.

Cameron Smith won in Hawaii yesterday despite having negative strokes gained approach for the week.

Of the 611 PGA Tour events all-time tracking strokes gained approach, only 22 have been won by players with a negative SG approach number (3.6%).

Of course, it helps when you putt like the 26-year-old Aussie did at Waialae Country Club. Smith led the field in strokes gained putting (2.058), which includes that smooth left-to-right breaking nine footer he drilled after all the madness on 18 to force extra holes with Brendan Steele.

Funny enough, despite Smith’s substandard performance on approach shots, that area wound up being the difference in the playoff. From a similar yardage as Steele after a poor drive, Smith knocked his second shot to 10 feet before Steele flew the green with his. Moments later, the Aussie, who previously partnered with Jonas Blixt to win the 2017 Zurich Classic, tapped in for his first individual PGA Tour title.

Smith’s performance also underscored just how different of a story strokes gained stats and traditional metrics can tell. While Smith ranked 53rd in strokes gained approach, he was 20th in greens in regulation and 18th in proximity to the hole. In any event, he wound up No. 1 where it matters most.