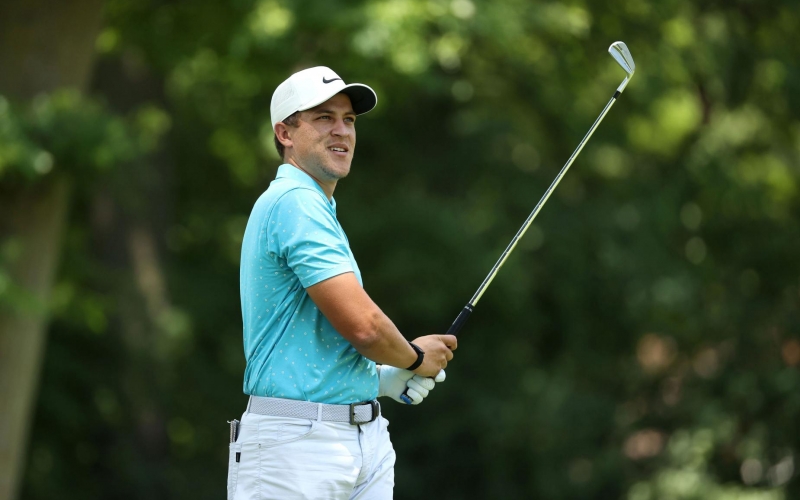 Cameron Champ hits his tee shot on the 11th hole at Detroit Golf Club during the first round of the 2020 Rocket Mortgage Classic. (Gregory Shamus)

By Ryan Herrington
Nervous. Scared. Confused. These were just some of the emotions Cameron Champ was feeling after being told last week that his arrival test for COVID-19 at the Travelers Championship had turned up a positive result.

A little more than a week later, the 25-year-old two-time PGA Tour winner had different feelings after shooting an opening-round 69 at the Rocket Mortgage Classic: relief and excitement.

It was 4:30 p.m. Wednesday when Champ learned he’d gotten the go-ahead to compete this week. Having taken three follow-up COVID-19 tests on three consecutive days, each coming back negative, the tour decided to amend its rules on the timetable for asymptomatic players who receive a positive test to return to action.

Champ scrambled to get to Detroit, leaving from his home in Houston at 6:30 a.m. Thursday to make his 2:10 p.m. tee time. Upon arrival, he was tested once more for COVID-19 (getting another negative result) and then allowed to practice and play at Detroit Golf Club.

RELATED: Charlie Rymer’s fight with COVID-19: ‘I was absolutely scared’

Champ understood what had to happen in Connecticut—according to the tour’s health and safety protocols, he had to withdraw from the tournament and self-isolate. But since he appeared asymptomatic and couldn’t figure out where he might have contracted the virus, he wonder whether he really had it. Those thoughts lingered after the three subsequent negative follow-ups.

After assessing Champ’s situation and consulting with the Centres for Disease Control, tour officials agreed it was medically sound to amend how it treats players and caddies who test positive for COVID but are asymptomatic. The tour explained the change in a statement on Wednesday:

“Since the inception of the PGA Tour Health and Safety Plan, the tour’s policy for all positive test results for players and caddies requires a minimum 10-day self-isolation period, based on the Centers for Disease Control’s time-based protocols. Now that the tour is in week four of its return to golf and following several asymptomatic positive tests followed by negative tests—and after direct consultation with the CDC—we are transitioning to the CDC’s test-based model, with their support. Going forward, in accordance with CDC guidelines, a player or caddie who tests positive for COVID-19 but has not had any symptoms may return to competition if he returns two negative tests results, a minimum of 24 hours apart.”

“I think everyone was supportive,” Champ said of his reception when he arrive in Detroit. “I think just about everyone knows about my situation and with the tour players on the board, they’re the one that voted it in or were one of the ones that helped vote it in, so I know they all had my back and supported me and knew my situation. … So it was just nice, like I said, not to have people look at me, ‘Oh, he has corona, we have to be careful’ type deal. The support, it definitely makes it easier to come back. Again, not having people looking at me thinking that I’m contagious or anything.”

There was one other emotion Champ was feeling on Thursday: appreciation.

“As far as being back, it feels amazing,” Champ said. “Like I said, this last week has been a lot of ups and downs, a lot of talking on the phone. Probably the most I’ve talked on the phone this last week in the last three months combined. It just feels again nice to be back playing, seeing all the guys, playing golf.”