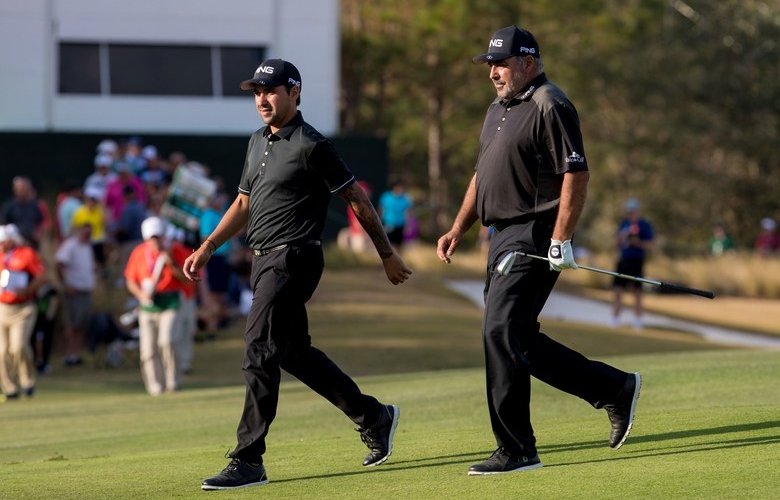 Angel Cabrera Jr., and Angel Cabrera walk onto the 18th green during the final round of the PNC Father/Son Challenge. (Photo by Manuela Davies/Getty Images)

By Ryan Herrington
It’s a two-day exhibition with relatively low stakes but genuinely big rewards, as the latest champions can attest. Two-time major winner Angel Cabrera and his son, Angel Jr., weren’t originally scheduled to play in this week’s PNC Father/Son Challenge. But the duo received the last invitation into the 20-team field when Curtis and Tom Strange had to bow out, and made it count with a two-stroke victory over Bernhard and Jason Langer and David Duval and Nick Karavites.

The Cabreras followed up an opening 59 in the scramble format on Saturday with a 12-under 60 at the Ritz-Carlton Golf Club in Orlando on Sunday.

“[This week] has been so special that it really can’t compare to any event I have played in the past,” Angel Jr., said. The 28-year-old, who goes by the nickname Angelito has been trying to follow in his father’s footsteps, having turned pro and played in 15 PGA Tour Latinoamerica events during his career. He also has made one lone PGA Tour start, a missed cut at the 2013 Puerto Rico Open.

Cabrera Sr., meanwhile, has struggled in 2017, playing 17 events and making just five cuts, with no finish better than T-34 in an individual stroke-play event. He came into the week in Orlando with an injured wrist but became inspired by the circumstances.

The Cabreras are just the fourth father-son team to claim the title in their first appearance.