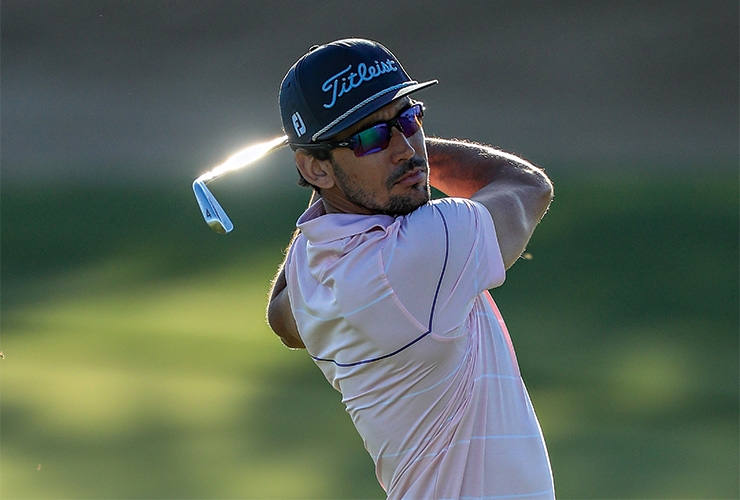 David Cannon/Getty Images
Rafa Cabrera Bello plays his second shot on the 17th hole during the second round of the Abu Dhabi HSBC Championship at Abu Dhabi Golf Club on January 17, 2020.

By Kent Gray
Rafa Cabrera Bello gleefully accepted a couple of gifts from the golfing gods while Matthew Fitzpatrick was pleased to take lady luck out of the equation with his “disciplined” play.

Sprinkle in five birdies apiece, mix it all together and the Spaniard and Englishman find themselves joint owners of second place at the halfway stage of the 15th Abu Dhabi HSBC Championship, a shot adrift of surprise Italian leader Francesco Laporta.

Fitzpatrick’s second round 67 was a shot better than Cabrera Bello’s 68 and he’s gone bogey-free thus far. There have been three dropped shots through 36 holes for Cabrera Bello but both will begin moving day at Abu Dhabi Golf Club at -9. In other words, with exactly the same chance to capture their first European Tour wins since 2018 (Fitzpatrick) and 2017 (Cabrera Bello) respectively. 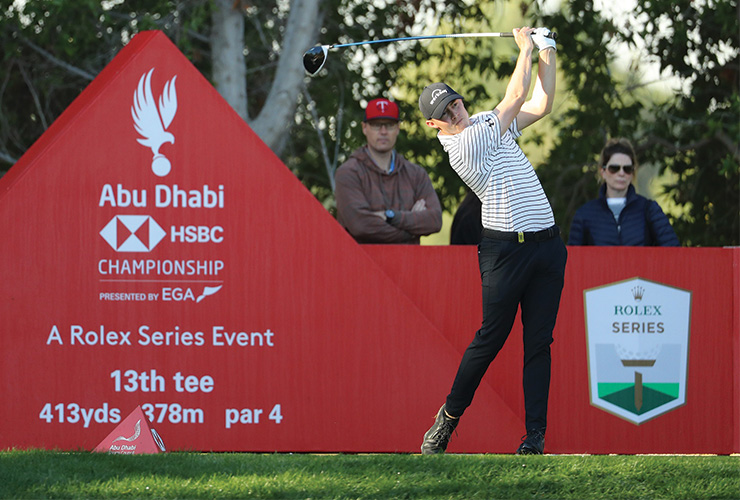 “Yeah, for the first week of the year, to have no bogeys, couldn’t ask for a better start, really,” said Fitzpatrick who isn’t playing like a man fresh from seven weeks off. “Just played really disciplined golf and it’s worked out well so far.”

Like 2012 Dubai Desert Classic champion Cabrera Bello, Fitzpatrick has pedigree in the desert, his win in the 2016 DP World Tour Championship the middle of his five European Tour wins thus far. Do you get up for the Rolex Series events more than other tournaments, Matthew?

“No, to be honest. For me every event is the same. You’re here to win. Don’t matter what you’re playing for, really. Obviously it’s always a nice bonus, playing for more money and more points, Ryder Cup.  But you’ve got to go in with the same attitude.”

Cabrera Bello, searching for his first win since the 2017 Scottish Open, was pleased to back up his opening 67 and even more so with a second-round card sporting five birdies after his dropped shot on the par-3 7th.

You take momentum any way it comes in golf and for the 35-year-old world No.42 it came in the form of binned birdie putts from downtown on the 11th and 13th.

“Those felt like those putts that go in once every year, and they both went in,” said Cabrera Bello who amassed five top-10s last year without being able to add to his three European Tour wins.

“I mean, golf takes away from you more often than it gives you back, but when the golfing gods want to give you a little extra, you’re just happy to take it.

“I like how the round went from less to more, as in improving throughout the day and holing some really, really long putts that for sure gave me a lot of momentum. Also playing some very good golf particularly on the last holes.”