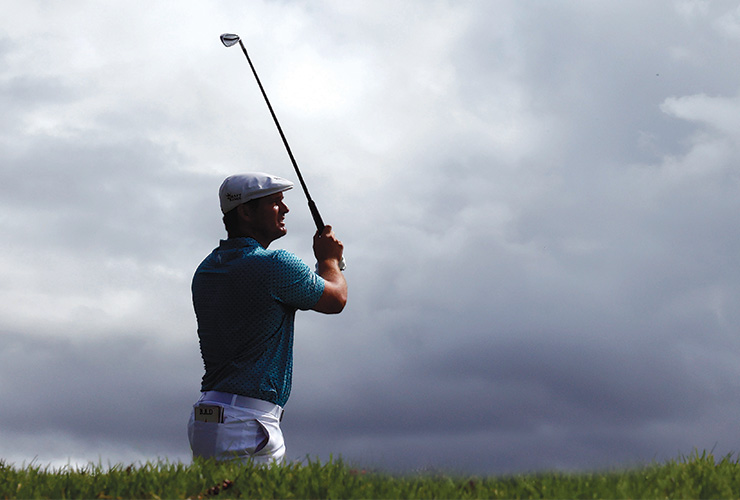 By Kent Gray
New year (thankfully), same old questions (inevitably). Mercifully, Bryson DeChambeau’s answers to repeated questions of distance, lengthy affairs in of themselves, never get tired. That’s because the reigning U.S. Open champion is still looking for more pop off the tee and articulates said pursuit of once-unthinkable performance gains with such fascinating honesty. Romping to victory by six strokes at Winged Foot in September has not only served to embolden his plan for world dominance via scientifically verified brute force but given us more unique insights into the future of the game (like it or not) from the eminently quotable Californian.

“Exactly,” DeChambeau said when asked if his major breakthrough had reinforced the belief in the methods that were seen as madness not so long ago. “I’m not trying to prove my point, just showcasing it, in a sense, saying this is what I’m going to do and how I’m going to do it.”

DeChambeau’s reshaped physique and resulting distance gains were arguably the golf story of 2020, save for a pesky pandemic and the brief distraction of Dustin Johnson’s emotional Masters win. But it’s the second part of his bomb-and-gouge methodology where the 27-year-old has been equally focused recently, even if the media have mostly focused on his new bromance with world long drive champion Kyle Berkshire.

Lost in the revelation of 211mph swing speeds on the range at the recent Sentry Tournament of Champions at Kapalua and how an overactive frontal lobe at Augusta National helped derail his bid for green jacket, was a determination to get the ball in the hole in fewer of those rather awkward looking locked-arm putting strokes of his.

On the very day he fronted journalists in a virtual press conference to preview his second Saudi International appearance, DeChambeau was headed for a session with his putter maker, SIK Golf. Typically, it wasn’t going to be a few simple swipes on the practice green and then into the bar.

Sure, DeChambeau says, he is bigger and faster. But that advantage off the tee is only an advantage if you can get more putts to drop.

“… for the most part you won’t see me with a 5-iron in hand into a par 4. Just doesn’t happen very often anymore. I try and bomb it out there and wedge it close and still make a lot of putts.

“For example, played in Kapalua [T-7 at 20 under, five shots behind winner Harris English], and to me, it was a golf course that I felt like I could demolish. I still didn’t putt my best but at the end of the day, it was a completely different golf course.”

DeChambeau views Royal Greens Golf & Country Club, where he finished T-6 in the inaugural tournament in 2019 with four rounds in the 60s, in the same light. Indeed, he intends setting his schedule around such layouts, a “bit of a bomber’s paradise” as he put it. 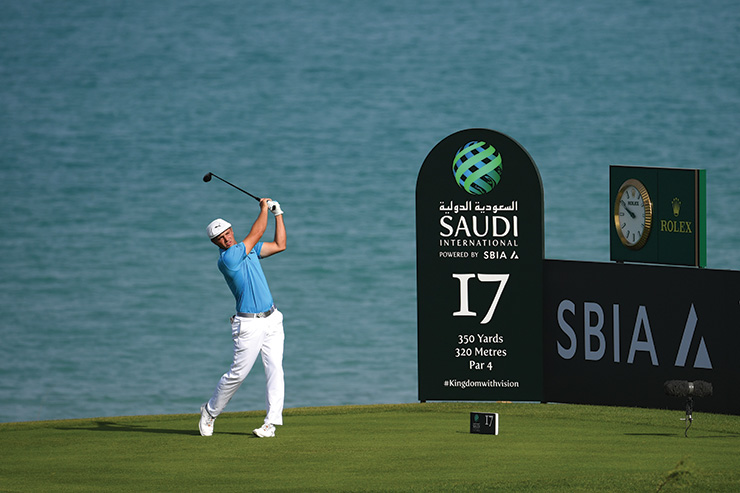 “A lot of it, too, is trying to rest my body and make sure I’m playing in tournaments that suit my game, as well. I’m looking at trying to play golf courses where you can miss it a little bit but again, you still have to hit great shots. I will tell you, though, that hitting it far there [Royal Greens] will be an advantage with some of the par 5s and I think it will fit me well, a lot better than the other golf courses [in the Middle East].”

Perhaps the best question posed in this new age of driver, wedge, birdie look was how DeChambeau would set up a course to foil himself. The short answer, he said, is that there really isn’t a defence.

“I would say it is a strategic golf course where you have to hit irons off the tee and you have to keep it in play. Even at that point, I still have an advantage when I’m hitting my 8-iron 200 to 205 yards. No matter what, that’s a huge advantage.

End of the road
Where there is a ceiling, in DeChambeau’s wondrous mind at least, is ball speed. Time spent training with Berkshire reiterated that 210mph is probably the point of diminishing returns.

“For me I think where he’s kind of at, around that 210-mile-an-hour ball speed, playable with a 45-inch driver… it is something that is definitely achievable and intriguing to me, and I feel like once you get to that point, it’s kind of the end of the road to me, there’s not really much more, nor is it a reason to gain because you’re driving par 4s at that point.”

So how close have you come to that 210mph milestone?

“Yeah, so I’ve reached it a few times actually, but the difference is I can get up there with 150 golf balls in training, really working hard and swinging as hard as I can for a long amount of time. But when you get to the golf course, you have to hit it straight, right. It’s a completely different perspective change that I have to have on the golf course.

“For example, at Kapalua, I actually got to 211 on the driving range on Wednesday, and then when I got to the golf course, I got it over 200 in a practice range session before I went out but when I get out to the golf course, it was 193, 194. That just shows you how the brain reigns you in going, no, I need to hit it straight because I’m a professional golfer and I still need to keep it in play every hole.

“So you kind of lose that ability to just free yourself up and let it go. As of right now, I’m trying to learn how to bring that lower end up to where it’s around 200 today because I can get it over 200 no problem.”

Masters Matter
Fast and ever forward-thinking. Welcome to DeChambeau’s world. It’s no surprise then that he found the old grey matter was in overdrive at Augusta National where he didn’t feel well during the rescheduled Masters. Struggling to rekindle the feelings he enjoyed at Winged Foot, the pre-tournament favourite finished T-34 on two-under, 18 strokes adrift of Johnson, and went searching for answers.

“I actually went to multiple doctors, multiple people, trying to figure out what this was. I got a bunch of MRIs. Went to an inner ear doctor, eye tests, eye pressure, ear pressure, even did an ultrasound on my heart, ultrasounds on my neck to see the blood flow and how things were moving through the different areas of my body, and everything came back really, really well.

“The one thing I will tell you is that I’ve done a lot of brain training with Neuropeak, and the frontal lobe of my brain was working really, really hard and that’s kind of what gave me some weird symptoms. Like crazy overworking.“

Breathing exercises and a better sleep routine have helped but DeChambeau was never going to stop there.

“I’m really working on gut health right now. I think there could be something there. I guess you could say it was a dirty weight gain bulk. I’ve started to lean out over the past month, still trying to have strength gains while maintaining good muscle mass, good muscle size and strength, and power, as well. That’s what I’m trying to develop is a lot of power now. It’s going to come through eating well, feeding my body with the right sources to make sure this head stuff doesn’t ever come back.” DeChambeau, pictured here at the Masters, is doubling down on his putting in 2021. Rob Carr/Getty Images

Deep State
What will continue to be repeated is the scrutiny of DeChambeau’s unconventional methods. The distance debate has reached simmering point courtesy of the Californian. And remember when he fell foul of the rule makers for putting side-saddle? What would happen then if you get even better on the greens and your locked-arm method comes under the microscope?

“If players find a way to put themselves in a position that allows them to repeat motion more consistently, then good on them. That’s just being innovative and smart about how they are approaching a certain part of the game, which I think is part of the game. It’s a thinker’s game, right? That’s what golf is.”

Clearly, some think deeper than others. Which is why DeChambeau will arguably be the main drawcard in King Abdullah Economic City even with world No.1 Johnson, the 2019 champion, and a host of other big names in the house.

“Absolutely. Having a world No. 1 [in the field] puts a little fire my belly. I want to go over there and play and beat him,” DeChambeau said of Johnson who currently occupies the world ranking he openly covets.

“I was fortunate enough to clip him by one or two in Kapalua and if I keep doing that, if I keep beating him in every event, eventually the tables will turn.”