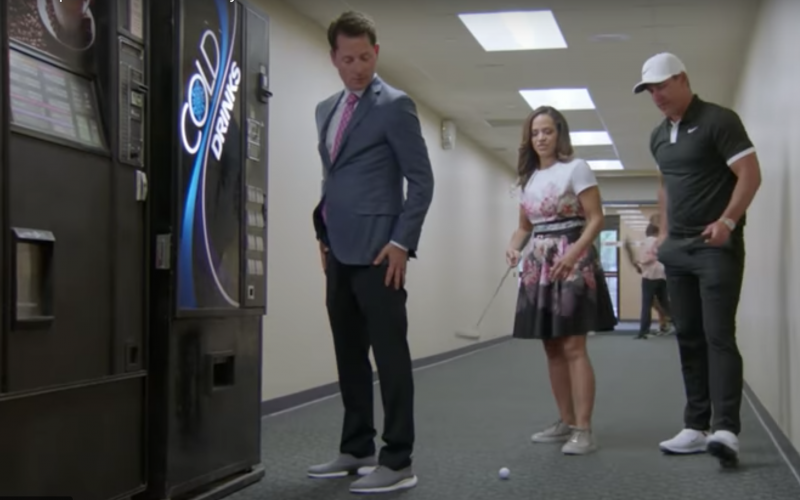 By Alex Myers
As much as Brooks Koepka has achieved over the past few years there was one particularly big hole left to fill on his résumé. And it’s not a Masters title. No, we’re talking about the ultimate status symbol for a sports star: appearing in a SportsCenter commercial. But now Brooks can check off this critical athletic accomplishment.

Brooks stars in not one, but two new ESPN commercials that are part of a collection of 12 new spots for the iconic—and we don’t use that word lightly—This is SportsCenter franchise. And the World No. 1 shows off some pretty good acting chops.

First, there’s “The Putter Wipe” in which Koepka is watched closely by SportsCenter anchors Matt Barrie and Elle Duncan as he attempts to cut a PB&J sandwich:

Apparently, Koepka’s cuts off the tee are more accurate. You also might notice that’s not Brooks’ normal caddie, Ricky Elliott. But don’t worry, he hasn’t ditched the Northern Ireland looper who has helped lead him to four major titles. That’s actually a childhood friend of Koepka’s named Dan Gambill.

The next ad features Koepka in some kind of putting contest with Duncan. But after he marks his ball on the ESPN office carpet, Barrie picks up the change and finishes buying a soda from the vending machine:

Only time will tell if either of these will end up in the pantheon of This is SportsCenter commercials, but Brooks shouldn’t be offended if they don’t. For The Win ranked the top 25 a couple years ago, and between the Manning brothers fighting in an ESPN hallway in front of their dad, LeBron James trying to fix a copier paper jam, and of course, Charlie Steiner wearing war paint in the famed “Y2K” spot, a high bar has been set. Oh, man, these are so good. Don’t mind me. . . Be back in a few hours. . .

Rickie Fowler shares his simple reason for getting engaged the week before the U.S. Open

What do you give the golfer who got everything in 2017? Justin Thomas gives us a few ideas