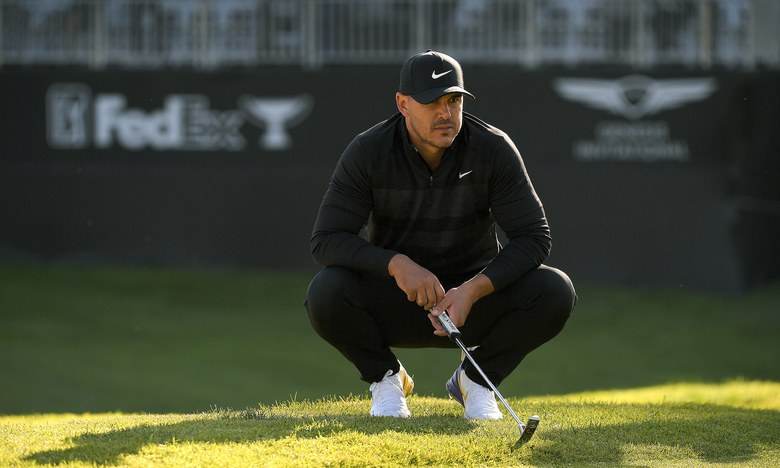 Brooks Koepka waits to putt on the 14th green during the first round of the Genesis Invitational at Riviera Country Club on February 13, 2020, in Pacific Palisades, California. (Photo by Stan Badz/PGA TOUR via Getty Images)

By Christopher Powers
In October, Brooks Koepka revealed that he had played through a knee injury for much of last season, one that required him to get a painful stem-cell injection following the Tour Championship. After staying off his feet for a few days, then rehabbing the knee, Koepka entered the Shriners Hospitals for Children Open feeling much better and insisted that he could “finally practice again, which is nice, without pain.”

The following week, Koepka withdrew prior to the third round of the CJ Cup, citing more issues with his knee. During his second round in South Korea, Koepka slipped on wet concrete, re-aggravating the injury. That was in mid-October. Koepka did not appear again competitively until the European Tour’s Abu Dhabi HSBC Championship in January.

Koepka cleared that up in an interview with Golf Channel’s Todd Lewis prior to this week’s Genesis Invitational, his first start on American soil since the Shriners. Lewis asked him how difficult the recovery process was, and Koepka’s response was illuminating.

“It was a lot worse than we let on,” Koepka said. “A lot of pain. I’m nowhere near 100 percent, I don’t know if my knee will ever be 100 percent. It’s one of those things where I’m just trying every day.

“To be honest with you, Monday [at Riviera] was the most pain I’ve had since I tore it. You have good days and you have bad days and you’ve just got to really watch it. Now it feels stable though. I don’t feel like my knee, when I’m walking, it’s going to go out to the left or go inside on me. It feels stable. It’s just strengthening things. But yeah, there’s still pain there.”

For someone who already went through a wrist injury, this doesn’t sound ideal. Of course, all he did after returning from that wrist injury was defend his title at the 2018 U.S. Open and then win the PGA a few months later. But, as Tiger Woods knows, knees are a different ball game, so it’ll be interesting to see how Koepka handles the pain as the season progresses.