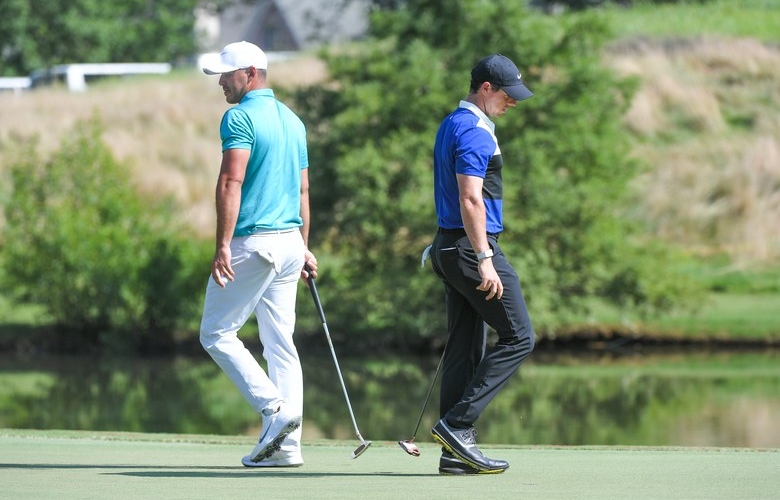 Brooks Koepka and Rory McIlroy are paired together in the final round of the WGC-FedEx St. Jude Invitational. (Photo by Ben Jared/PGA TOUR via Getty Images)

Sunday’s final round of the World Golf Championships-FedEx St. Jude Invitational isn’t to decide a major championship. But it is a major opportunity —especially for the 30-year-old Northern Irishman.

“It is exciting,” said McIlroy, who leads Koepka by a stroke through 54 holes at TPC Southwind after a sizzling eight-under 62 on Saturday. “He’s the number one player in the world, four majors in the last three years. He’s the man right now.”

It’s also chance for McIlroy to prove that he’s more than resilient. It’s a chance to prove that he can perform when the pressure is at its highest (or at least as high as it can be at a non-major).

After all, it wasn’t that long ago that McIlroy was the man.

Between 2011 and 2016, he won 19 times around the globe, including four majors to become the third player to win at least four majors by age 25 (Jack Nicklaus and Tiger Woods were the other two). He was the No. 1 player in the world, had the Golden Bear saying that he could win 15 or 20 majors and appeared to be the face of the sport for the foreseeable future.

In the years since, however, McIlroy has gone majorless. He has won other titles along the way, but he has also built up his share of scar tissue, too — from the final-round meltdown of the 2011 Masters, to the opening-round implosion at last week’s Open Championship at Portrush, and more than his share of gags in between.

One of them came right here at TPC Southwind. A stroke off the lead in the final round of the 2012 FedEx St. Jude Classic, McIlroy, needing to birdie the 18th, stepped to the tee on the par-4 and promptly yanked his 3-wood left and into the lake.

Then there was last week’s British Open, the first played in Northern Ireland in 68 years at a course where he’d shot 61 as a 16-year-old and an hour from where McIlroy grew up. Carrying the expectation of a nation, he stepped onto the first tee in the first round, felt his pulse quicken, his hands shake and watched helplessly as his tee shot with an iron inexplicably tumbled out of bounds. He went on to quadruple- bogey the hole, made triple at the last and shot a stunning 79.

That McIlroy bounced back the next day and nearly made the cut was hardly a surprise. He has a history of that, too — his win in Canada earlier this year came off a missed cut the week before at the Memorial and featured a final-round 61.

“The pressure, I guess the pressure’s off a little bit,” McIlroy said. “You’ve had a bad week and you go to the next week and you say, OK, I didn’t do this well. So you’re sort of trying to focus on that rather than winning the tournament.

“So for me, this week I wanted to focus on neutralizing my ball flight and trying to dial in my distances. All of a sudden, you know, those two little focus points, have made me play some good golf again.”

Now the question is does he have the mettle to hold off Koepka, and the rest of his pursuers? In addition to Koepka there are 11 more players within five shots of the lead going into Sunday.

None loom larger than Koepka, though.

Over the last two years, no one has been better when the lights have been the brightest. Koepka has won four of the last seven majors, which included this year’s PGA Championship at Bethpage Black. In the year’s other three majors, he finished T-2 (Masters), second (U.S. Open) and fourth (The Open).

Sunday will also mark the first time the two have been paired in the final round of a tournament and in some ways an opportunity for Koepka as well. If there’s a hole in his resume, it’s the fact that he has just two non-major wins on tour.

Throw in an extra $2 million to the winner of the Wyndham Rewards competition, and the stakes become that much higher.

“It will be a fun day tomorrow,” Koepka said. “There’s a lot, I guess, on the line and a lot to play for. Yeah, it will be fun duking it out with him.

“This is what you want. You want the best players coming down the stretch on Sunday with a chance to win.”