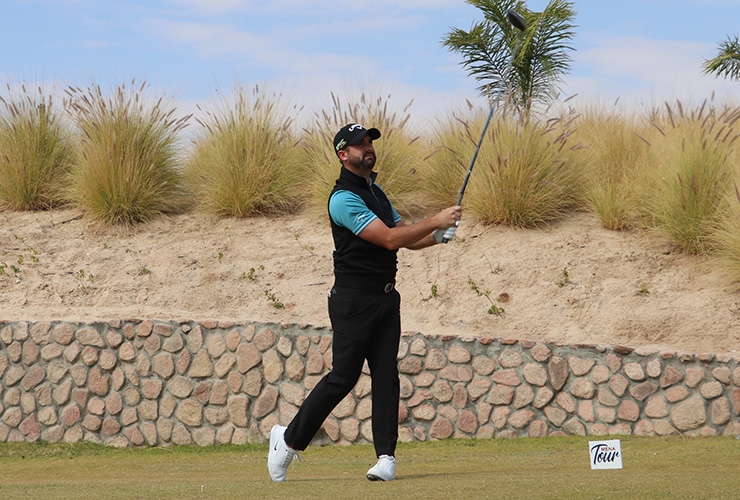 Matthew Baldwin is a combined 25 under par for his last five rounds at Ayla Golf Club in Aqaba, Jordan

By Kent Gray
As if things weren’t bad enough for Matthew Baldwin’s rivals at the MENA Tour season opener in Jordan.

A superb six-under 66 Sunday, in winds reaching up to 25mph no less, will see the 32-year-old Englishman take a five shot buffer into Monday’s final round at the $100,000 ‘Journey to Jordan-1’ event in Aqaba. After a 65 to open the 54-hole championship, just three days after sweeping the regional development tour’s category B Q-School, it seems everyone else is playing for second place behind Baldwin.

That’s deflating enough on its own but throw the MENA Tour’s latest announcement into the mix and it’s downright depressing. The winner at Ayla Golf Club this week will earn an invite to the Challenge Tour’s Challenge de España from May 2-5. Baldwin will be a deserving recipient but the thing is, he already has Challenge Tour status after losing his European Tour card last season. Some folk earn all the luck.

It’s not all bad news for the best of the rest in Jordan even if Baldwin is in complete control on -13, 131, five clear of a quartet of players in second place overnight: Scotland’s Conor O’Neil (69), Dutchman Maarten Bosch (68), English amateur Jack Floydd (69) and Belgian Christopher Mivis (68).

Presuming Baldwin doesn’t inexplicably stumble on Monday, there’s always next week, and the three weeks after that with the MENA Tour securing a total of five invites to second-tier European Challenge Tour events for the five winners of their new ‘spring swing’ events in Jordan, Ajman, Oman, Dubai and Bahrain.

We are pleased to announce that the champion of this week’s Journey To Jordan-1 at @AylaOasis Golf Club will be going to the Challenge de España (May 2-5)!

It’s another major coup for the revamped regional Pro-Am circuit which, in addition to a combined purse of US$825,000 across 10 events, had previously secured European, Challenge and Asian Tour invites for the top five players on the official Order of Merit (OOM) following the completion Royal Golf Bahrain Open on March 14.

The OOM leader after Bahrain will tee it up in the European Tour’s Maybank Championship in Kuala Lumpur from March 21-24. Second place earns an invite to the Trophee Hassan II in Morocco from April 25-29, third a start in the new Jordan Mixed Open back at Ayla G.C. from April 4-6 while the fourth and fifth players will be headed to the Asian Tour’s Indonesian Masters (July 4-7) and Indonesian Open (Aug. 15-18) respectively.

With those carrots, you can’t blame Baldwin for his inspired play thus far. He’s a combined 25 under-par through five rounds on the Greg Norman-designed layout in the space of eight days.

The Englishman opened his second round with an eagle on the par-5 1st Sunday before rattling off a further five birdies after starting from the 10th tee. His only bogey came on the par-5 17th hole.

“It was really good today. I hit it a lot better than I did yesterday… I hit it close and I putted well.

“Five shots is a handy lead but I will just try to play golf tomorrow. If somebody comes from behind and catches me, then well played to him.”

BITE-SIZED INTERVIEW
(After 2d round of Journey To Jordan-1)

It was business as usual for @mattbaldwin26 at @AylaOasis Golf Club course as the 25-30 mph wind hardly seems to have affected him.

He spoke after taking a massive five-shot going into the final round…#HBFS pic.twitter.com/6UTZLUkq98

Jordan 15-year-old Shergo Al Kurdi did not have the best of second round and dropped down to two-over par following a 77. He will however still feature on Monday as the MENA Tour allows the top-10 amateurs to play on the final day in an effort to grow their experience. 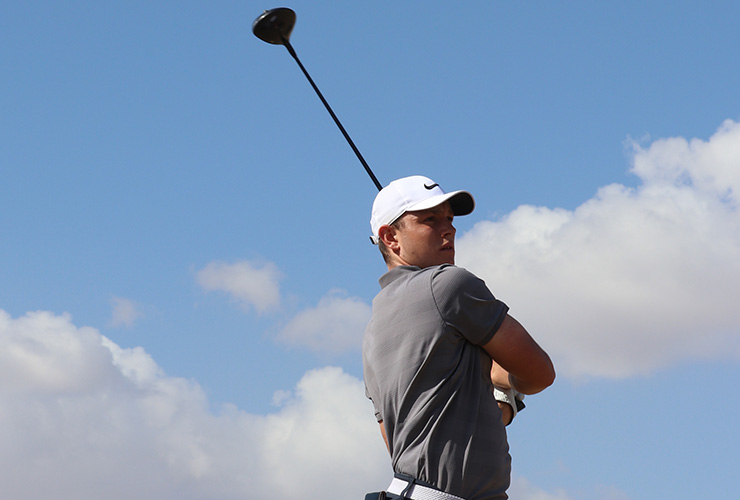 English amateur Jack Floydd has been impressive in Aqaba.

Like Baldwin, 22-year-old Floydd started with an eagle on the 1st and was four-under through four holes with birdies on the 3rd and 4th..

“The conditions were difficult out there and I just tried to control my ball flight,” said the James Madison University alumni.

The cut was applied at one-over 145 and 56 professionals made it to the final round. Among those to miss out were 10-time MENA Tour winner Zane Scotland – annoyingly by a single stroke after rounds of 71-75.