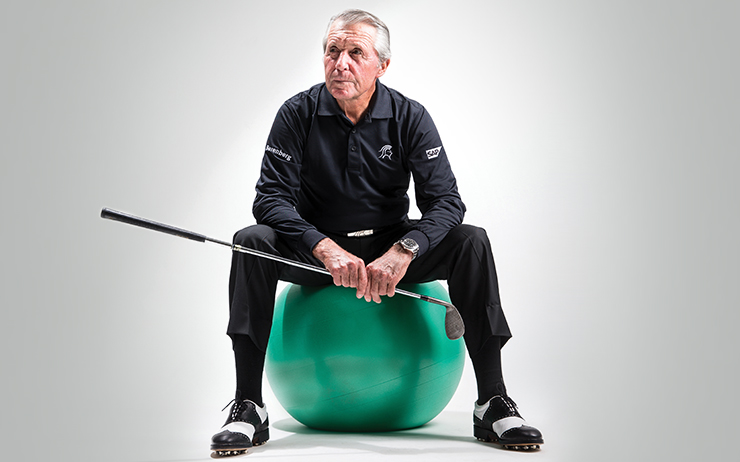 Fifty years on from completing the Career Grand Slam, the inspirational Gary Player is directing his boundless energy towards philanthropy. Oh, and he can still break 70

ary Player turned 80 this month, but not even that landmark birthday could tempt him into some wistful reflection. The capacity to dwell on past achievements really isn’t part of Player’s DNA.

Most normal octogenarians are content to take life at a fairly sedate pace, but this rather exceptional man has been racking up abnormal achievements for over 63 years and is not about to let a number stop him.

The day we met the nine-time major winner last month had been a textbook Gary Player day. It had begun in Abu Dhabi, where he entertained dignitaries, hosted a press conference and  held court while announcing the launch of February’s Gary Player Invitational at Saadiyat Beach Golf Club. He arrived at the Golf Digest Middle East offices in trademark all black attire, not a hair on his head out of place and the twinkle in his eyes as bright and engaging as ever. When we got the ball rolling by inviting him to look back on his favourite achievements, he replied with a smile: “I may be 80 but I feel 50. And I still have a lot left to do.”

Player had flown in from the U.S. the previous day, but normal human afflictions like jetlag and tiredness just bounce off him. An hour-and-a-half into our scheduled hour, he was leg-pressing Claudine Foong, our fitness editor, and admonishing Tiger Woods for bulking up too much. He then, of course, headed straight for the gym. In this exclusive interview, Player tackles golf’s new era, the art of being a superstar and the next big record he’s desperate to break.

As you turn 80, tell us what achievement you’re most proud of?
The one I savour the most is being the only golfer to win both grand slams, the one on the regular tour and the one on the senior [Champions] tour. Maybe the grand slam on the senior tour was a greater effort, because you have to do it after the age of 50. There are five of us who did it on the regular tour, and I’m the only one who did it on the senior tour, so it must be harder. Nicklaus, Palmer, Trevino and Watson – all those guys tried it. But I think the reason I was able to do it was because when I was 50, I was in almost the same condition physically, through working out, than I was when I was 25.

You’re here to launch the Gary Player invitational at Saadiyat next February. What makes the event so special?
Having struggled and been poor as a young person, I always vowed that I would do something for the poor. And this will be a very exciting event. We’ll bring many top professionals from both the men’s and women’s games, top celebrities and businessmen. We’ve had a great reception from the local government officials and sheikhs, and I can’t wait to host the event next year. I would imagine the government or Sports Council may choose something to do with youth, but it will be up to them to decide the beneficiary. We’ve now raised $60 million worldwide through the Gary Player Invitationals in South Africa, China, UK and America, so we’ve changed the lives of thousands of people. As for Abu Dhabi, it’s a place I have great affection for.

Is your charity work a big part of what keeps you going?
It’s not easy to travel extensively around the world when you get to 80, and I’ve been doing it for 63 years now. The travel does get more tiresome as you get older, but our dream is to raise $100 million before I pack it up, and if I stay well, I think we’ll achieve that, because other countries are very interested in hosting the Invitational. They see how we change the lives of unfortunate people and they want to be involved.

What causes mean the most to you?
It’s difficult to pinpoint specifically. President Nelson Mandela, our great father in South Africa and the most incredible human being; he and I worked for many years together and raised a lot of money for young black children. Our theme generally as a company has been education. We want to educate young people because education is the light. In some cases we’ve gone into villages, where old ladies are collecting all the papers in the village to keep it clean, having the papers recycled, turning it into money, planting trees, turning that into money, buying bicycles for young children where they ride to school. Aeroplanes going into villages and picking up people who are sick and would otherwise die, and flying them to a Gary Player ward in Cape Town. There are many different ways in which we are involved, but overall, it starts with education.

Your design company has 325 golf courses worldwide. how has the business changed, and what does its future hold?
It’s changed dramatically, with the machinery that you have now you can do golf courses quickly and in a very sophisticated manner. Technology has gotten better and better. We’re finding different kinds of grasses growing in areas we thought we’d never see. I built my own nine-hole golf course at home on my farm in South Africa with one machine and three people! You could never have done that in the old days. But we’ve got to be very careful that we don’t build golf courses that the average golfer doesn’t play. The weekend golfer is the heart of the game, and we’ve got to build courses that cater [to that type of player]. We need to cut the ball back for professional golf and leave things as they are for amateur golf. We’ve got to get more people participating, and to do that we’ve got to work with young people to get them into golf. If you look at most sports, you’re finished by the age of 35. Other sports are play and away, golf is play and stay. At 80 years of age I still average 70 on a normal golf course. The game offers enormous longevity.

Where does Saadiyat Beach rank among your favourites in the black knight portfolio?
It’s one of my dearest favourites because it has magnificent holes along the ocean, interspersed with the desert setting. There’s a great balance to the golf course. They have a wonderful practice facility there. And Abu Dhabi is such a fantastic place to visit in the winter, especially if you’re coming from Europe. I’d love to see us get some young champion from the Middle East, and it will happen. As long as we can encourage young people to take it up at school. Diabetes has become a chronic problem here, so we’ve got to make sure the message gets home so that trend is reversed.

Is it fair to say that 2015 marked the start of a new era for golf?
Very much so. We’ve got three wonderful young champions, with  a host of others knocking at the door. Jordan Spieth, Rory McIlroy and Jason Day are wonderful young men, are great ambassadors and they all take their gym work extremely seriously. But anybody could all of sudden pop up like a mushroom and be No.1. Competition is a great asset, and an essential ingredient in life. Professional golf has never been so healthy, so now we’ve got to put all our efforts into the average person playing golf. Rounds are going down, and we need to make them faster, cheaper and shorter, if necessary.

Of Rory, Jordan and Jason, whose game do you like the most?
I’d rank the swings as Jason Day number one, Rory McIlroy number two and Jordan Spieth number three. In putting, I’d put Jordan at number one, and the other two tied. You’re talking about the toss of a coin. I can’t tell you who will be the best – they’re all so close. And it’s so healthy to see this. This rivalry is going to inspire them to work harder and continue to raise the bar, and that will be fantastic for the public to watch.

At that level does it boil down to how well they handle pressure?
There’s a little thing called ‘it’. Nobody can define exactly why certain people become stars or superstars. No one can describe it, or package it, otherwise everyone would become outstanding. In my opinion, being able to accept things in adversity and being able to perform best under pressure, are the defining characteristics of the true greats. Many players are outstanding in practice rounds. Take a man like Tom Watson, who is a superstar, and he never won for 10 years. Or David Duval, who was No.1 in the world. He couldn’t win again. And now Tiger, it will be interesting to see what will happen with him. Can he come back and win majors again? Well, this is the great debate of the era and it’s going to be fascinating to watch. A man who was on the verge of becoming the greatest player that ever lived and had won the U.S. Open by 15 shots, suddenly goes and has lessons, and from that day onwards his game has gone downhill. I’m a big Tiger Woods fan and we need him to come back. I hope he comes back, but he’s got a monumental challenge on his hands, particularly having had three knee operations and now, two back operations.

How refreshing was it to see Jordan Spieth’s knack for scoring take the focus away from power hitting?
The most overrated thing in golf today is long hitting – it’s all people talk about! But it’s not long hitting that wins a golf tournament, it’s what happens from 100 yards and in. Tiger Woods and Phil Mickelson, if you look at their stats as far as accuracy off the tee is concerned, are probably as bad as anybody that’s ever played elite golf. And yet they were numbers one and two for the best part of a decade. I saw Seve Ballesteros in 1986 at the Masters, leading the tournament, and he hit a drive over 300 yards on the 15th hole. He hit the next shot in the water and at the same time, Nicklaus holed a long putt on 17 and went on to win. Beware the man who’s the great putter!

During your major-winning days were Jack and Arnold a particular focus for you?
Did you pay more attention to what they were doing in a tournament than other players? We had different styles. We were concerned with working out what suited us. I did a lot of mind training and a lot of physical training, and I think that’s why my game is still good today. When I was doing it all those years ago, only two of us on tour worked out with weight training, and we were known as nuts. We took a lot of criticism, and now today they have a travelling gym following all tours – the ladies too, are working out, and let me tell you these ladies are playing magnificent golf. They’re hitting the ball a long way.