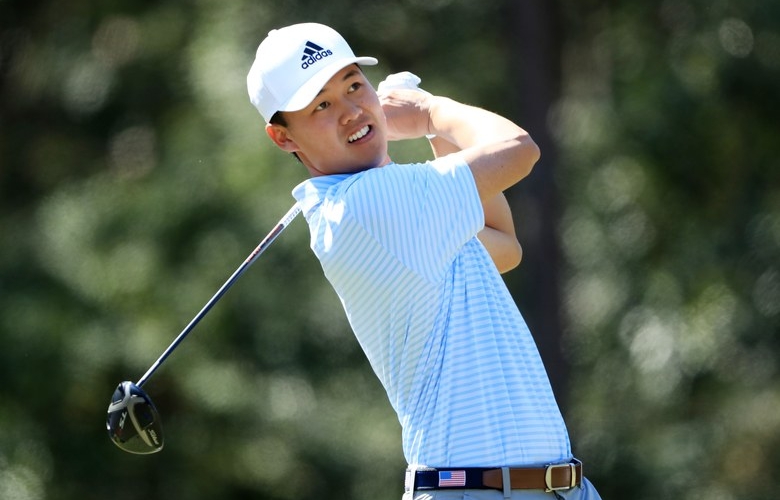 Brandon Wu tied for 17th in his PGA Tour debut at the Houston Open. (Photo by Sam Greenwood/Getty Images)

By John Strege
Brandon Wu opted for a more circuitous route to professional golf than his college contemporaries — Viktor Hovland, Collin Morikawa and Matthew Wolff, among the more notable of them. But now that he has arrived, he, too, is worthy of attention.

Wu, 22, made his PGA Tour debut on a sponsor exemption at the Houston Open and flirted with a top-10 finish. An 18th hole bogey at the Golf Club of Houston dropped him into a tie for 17th, a more than respectable debut.

“I would say I think I just go out and try to play my best,” he said following Saturday’s third round, which he finished tied for sixth. “I’m not too concerned with where I end up falling. I think, just kind of add them up at the end and see how it goes. Yeah, I think if I’m playing well, I can definitely compete out here, so that’s what I’m trying to do.”

On Sunday, Wu bogeyed his opening hole on Sunday and was never in contention. He shot an even-par 72 to finish at eight-under 280, six strokes behind winner Lanto Griffin.

Wu, who famously received his Stanford degree after finishing the final round of the U.S. Open at Pebble Beach in June, made his professional debut two weeks ago, in the European Tour’s Alfred Dunhill Links Championship. He played well for two rounds, then shot 76 in the third round at Carnoustie and missed the cut.

In the U.S. Open At Pebble Beach, Wu tied for 35th, second among the amateurs to Hovland, who tied for 12th. But unlike Hovland, who immediately turned pro, Wu preferred remaining an amateur so that he could compete for the U.S. in the Walker Cup in England. He went 3-1 for U.S. Captain Nathaniel Crosby’s team that won by five points.

A week earlier, he finished 30th in the Korn Ferry Tour’s Ellie Mae Classic, playing there, too, on a sponsor exemption.

Wu was fifth in the World Amateur Golf Ranking when he finally turned pro. That and his contributions to Stanford’s NCAA championship in June, his U.S. Open showing, qualifying for the British Open (he missed the cut), and finishing in the top 20 in his PGA Tour debut, more sponsor exemptions are likely in his future.