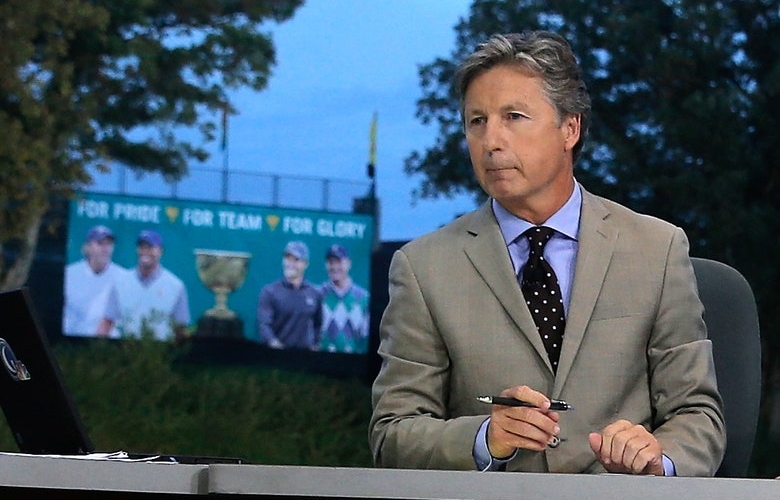 DUBLIN, OH – OCTOBER 04: Brandel Chamblee is seen on the set of The Golf Channel during the second day of play at the Presidents Cup on October 4, 2013, in Dublin, Ohio. (Photo by Scott Halleran/Getty Images)

By Matthew Rudy
If Brandel Chamblee was looking for an outlet to relieve some of his virus-induced social isolation this week, he found it.

The Golf Channel commentator used a two-part Golfweek interview to light golf coaches on fire, claiming (among other things) that “teachers are being exposed for their idiocy,” and that the flawed teaching philosophies permeating PGA Tour practice areas are ending more careers than they help. He proceeded to say that the teachers spreading those philosophies are being “bitch-slapped by reality” and the wisdom of crowds on social media and YouTube. “There it is. You’re wrong and they’re right.”

The airing of grievances continued with a dismissive wave at Golf Digest’s 50 Best Teachers list, as Chamblee continued: “I go look up all their players and then see are they better or worse? I go online, I look at their ideas and some of them crack me up.” He had a specific takedown of Jordan Spieth and his coach, Cameron McCormick, and Rickie Fowler for his decision to start working with a new coach in John Tillery.

Claude Harmon III falls into the former category, having handled the week-to-week tour work with Fowler for three years in tandem with his father, Butch Harmon. The younger Harmon said he admires Chamblee’s television skills but dismissed the wave of anti-instructor comments as a wrestling-style storyline designed to produce heat and attention.

“I worked at Sky TV for four years doing what Brandel does, and it’s brutal how hard that job is,” says Harmon, who coaches Brooks Koepka. “Brandel is a television character. He’s an actor. He has a role he performs, and he does a great job at it. Brandel is a thinker, and he does a lot of research. He’s 100 percent entitled to his opinions. But when it comes to talking about the swing and about golf instruction, it’s hard to take him seriously. He doesn’t give lessons, or have a body of work to evaluate.”

Chamblee was pointed and specific in his critique of Spieth’s swing, comparing video of swings from 2015 and today, and essentially calling teaching malpractice on McCormick for what Chamblee characterised as balance issues in Spieth’s swing.

“Why would his teacher tell him to change that? Why? He’s either being told to do that or whoever’s watching him doesn’t see that he’s doing that,” said Chamblee. “That would take two seconds to fix.”

McCormick declined to comment on the critical remarks, but Claude Harmon said Chamblee’s volley reminded him of last April, when Chamblee torched Koepka ahead of the Masters for changing his body to prepare for an ESPN photoshoot.

“It takes two minutes to call somebody’s agent to reach out, or, better yet, to walk over to Brooks or to me or to anybody else on a practice range and say what you want to say or ask questions to get some more information. Or, you can sit at 35,000 feet and criticize,” says Harmon. “The Spieth stuff? The problem is that I never see Brandel in the world I live in. Gary Koch comes and stands on the range for hours, just watching. And if he thinks he’s going to talk about a player, he asks questions so he can get details and context. The only time I’ve even seen Brandel at a tour event is in a cart, getting driven back and forth from the media compound.”

Harmon wasn’t the only teacher to bristle at Chamblee’s characterizations. Michael Breed started his SiriusXM PGA Tour Radio show on Thursday with a fastball high and tight, calling Chamblee’s comments sour grapes for his own shortcomings as a player. “What you’re really hearing is a guy who was frustrated he didn’t perform at the level he thought he should have performed at,” said Breed. “And it has to be somebody’s fault. It can’t be mine, so it has to be a coach or a teacher. Maybe you just weren’t that good.”

Chamblee has been outspoken about how “modern” golf instruction has robbed players of the natural athleticism they could be using to play better—and has said he was one of those victims—dropping off the PGA Tour in the early 2000s after almost a decade of consistently good play and one victory. It led to him writing his 2016 book, The Anatomy of Greatness, in which he said amateurs would be better off modelling what historical champions did instead of blindly following modern swing theories.

Tour coach Terry Rowles says Chamblee obscured the truth in some of what he said—that players can be hurt by ineffective coaching—with uncharacteristically clumsy language. “I know Brandel enjoys classic literature, and I know he knows that words have power. It sounded like a generalized, ranting cheap shot,” says Rowles, who works with Aaron Baddeley.

“Do some players take too much? Yes. Do some coaches give too much? Yes. It’s hard to balance the give and take precisely all of the time. Humans are messy. The same information that saves one player would ruin the next. How does that fit in with what you would see on YouTube? Only somebody who has never coached would say it was all easy and obvious.”

That was where Harmon left it, too. “My job would be so much easier if I could just give opinions in a vacuum, but my opinions have consequences. His don’t,” Harmon said. “Brandel is in the opinion business. I’m in the results business.”