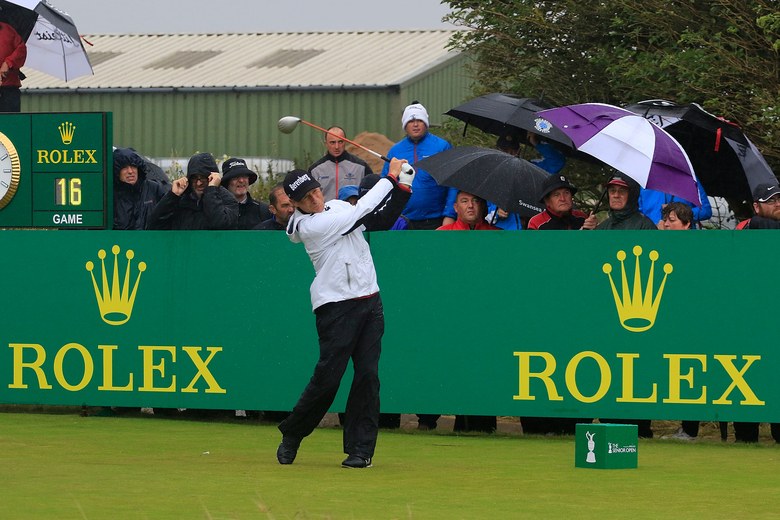 By Christopher Powers
One of the key qualities of an Open Championship is the challenge not only of links golf, but the weather that often impacts play. Last week at Royal Birkdale, much to the chagrin of golf fans tuning in to see a battle of the elements, the conditions in England were never bad enough to have any lasting effect on the 146th British Open.

It’s been quite the opposite so far this week at the Senior British Open, taking place at Royal Porthcawl Golf Club in Wales. The elements have been the story in the first two rounds, with winds reaching well over 25 mph and rain pouring. It’s been so brutal that 13 over will make the cut, and two players posted rounds of 94 and 96 on Friday.

Despite the weather, an illness and questions about his putting stroke, Bernhard Langer finds himself in a position he’s often in at the top of the leader board. The two-time Masters champion holds a share of the lead at one-over 143 after posting a three-over 74 on Friday. He’s looking for his second Senior British Open victory, the last coming in 2014 at Royal Porthcawl by 13 strokes.

Tom Lehman, who carded a one-over 72, is also at one over for the championship. The 1996 British Open winner has made the cut in all seven of his Senior Open Championship appearances, but has finished no higher than T-10. A victory this week in Wales would give him his fourth senior major championship.

Steve Flesch, Billy Mayfair and Mauricio Molina are also at one over through 36 holes.

Four shots back at five-over 147 is Colin Montgomerie, who shot a five-over 76 in his second round. While the Scotsmen has won three senior major championships, he’s yet to win a Senior British Open.

Tom Watson is six back at seven-over 150.

Those looking for more carnage will certainly get it over the final two days. More rain and high winds are on the way on this weekend at Royal Porthcawl.