Why is Bernhard Langer guilty until proven innocent? 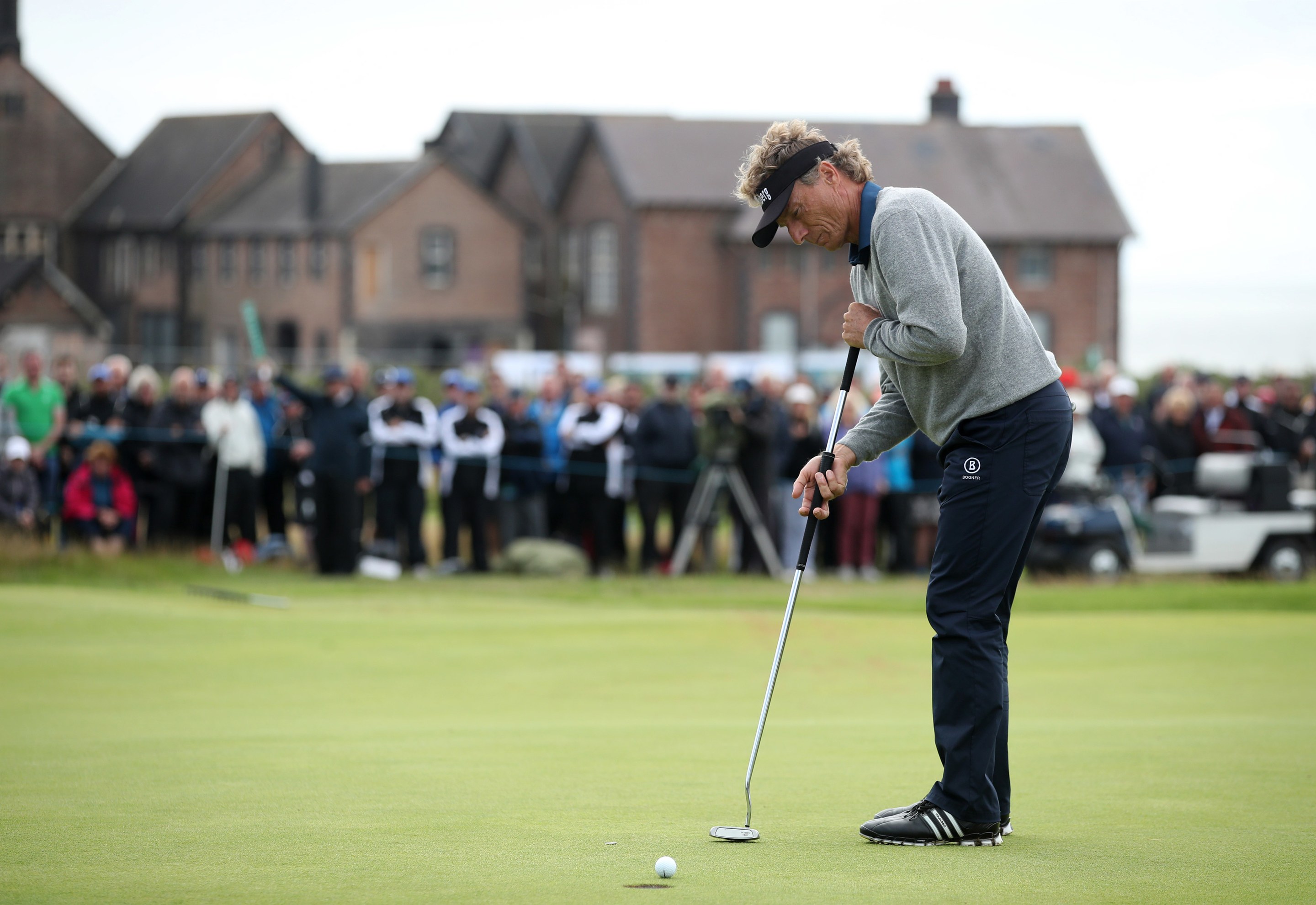 The Hall of Fame golfer says he’s not anchoring. So does the USGA, the R&A and the PGA Tour Champions. It’s time, then, for the controversy to stop.

By Jaime Diaz
There’s been a lot of theorising lately that Western civilisation is going through the “post-truth” era. The supporting evidence from the world of golf could be the current controversy over whether Bernhard Langer is anchoring.

It’s not that a game that so values honour and integrity is being plagued by public lies and blatant spinning to the same extent as the general culture. But there has been a noticeable eroding of the once almost unquestioned presumption that players are telling the truth. It seems as if—from charges of PED use, to taking drops in the right place, to correctly marking balls, to anchoring—golfers don’t quite believe each other like they used to.

Ensnared in this evolving perception are Langer and Scott McCarron, who have continued to use a long putter despite the USGA and R&A’s 2016 ban on using an anchored stroke. Each golfer vehemently maintains that by holding their top hand away their body and keeping it away during the stroke, they have legally adjusted to the new rule.

However, it’s easy to find fellow PGA Tour Champions players who will contend, off the record, that in the cases of Langer and McCarron, there is no perceptible daylight between their top hand and their chests when they putt. Some of these players believe that top hand brushing against clothing constitutes anchoring. It amounts to a substantial group of peers who feel there is enough visual evidence to warrant a strong suspicion that the two players are illegally anchoring.

Other objections to the methods of Langer and McCarron are founded in the language of Rule 14-1b, which in prohibiting anchoring states, in “Note 1”, the following: “The club is anchored ‘directly’ when the player intentionally holds the club or a gripping hand in contact with any part of his body, except that the player may hold the club or a gripping hand against a hand or forearm.”

It is the word “intentionally” that led Golf Channel’s Brandel Chamblee, who considers Langer’s and McCarron’s putting methods “questionable.” to deduce that anchorers have a built in “get out of jail free” card.

“And intent, I think there is apprehension on the governing body’s part not to ruffle feathers further,” Chamblee told Golf World’s Tim Rosaforte, cutting seven letters off the key word. “When it’s time to dig in, they’re reluctant to do so. Their acquiescence is to pass this rule, but the only violation is the intent to break this rule. … Basically what the USGA is saying is, ‘If you can live with cheating, then fine. If you can sleep with yourself, then fine.’

However, PGA Tour Champions rules official Brian Claar told Golf Channel that the word “intentionally” was put in the rule to protect a player from being penalized in the rare case of an accidental slip or strong wind during the putting stroke pushing the hand against the body.

Accusations, or suggestions of cheating in golf are always startling, especially when they involve prominent players. Langer has been dominating the senior circuit for years, as much at age 59 as ever. This year he is ranked second in putting average, as he was last year. McCarron, who has won four times on the 50 and over tour, is currently second to Langer on in the Charles Schwab Cup and ranks third in putting. At the Constellation Senior Players Championship two weeks ago, with unrest over the inssue among some their peers, they finished 1-2, with Langer giving up a lead late to McCarron.

It’s worth noting that there is a third player who made the same adjustment with the long putter as Langer and McCarron—Billy Mayfair. But the 50-year-old journeyman, whose T-9 in Wales marked his best finish on the PGA Tour Champions, has not been publicly questioned. 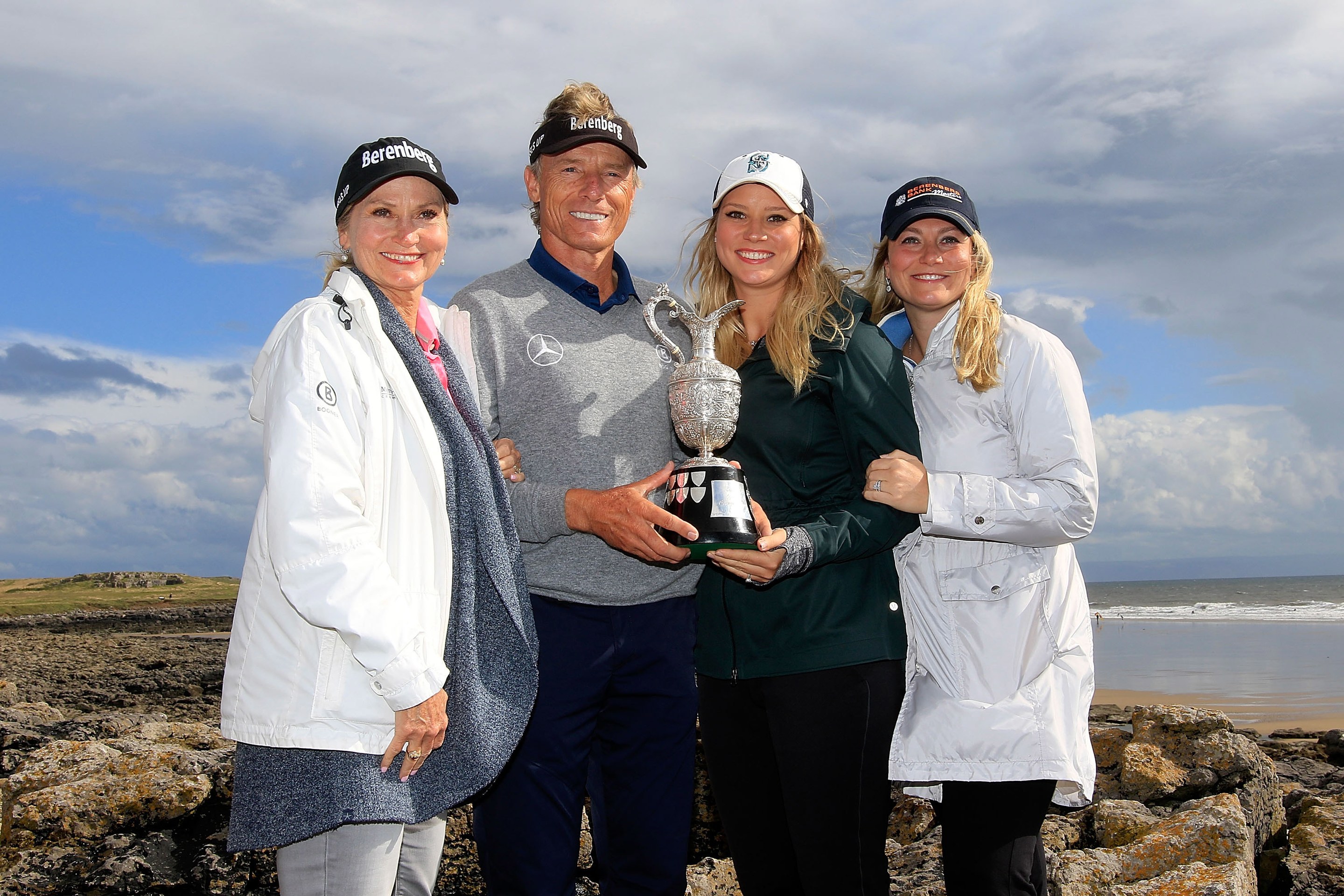 Phil Inglis/Getty Images
Despite the whispers, Langer has won five of his last 10 senior major starts, and enjoyed the latest with his wife Vikki (left) and daughters Christina and Jackie

Will Langer’s win Sunday at Senior British Open in Wales douse or intensify the controversy? It marked his third senior major victory of this season and his record 10th total. Langer is also the only player to have won all five senior majors, and with his 33rd official career senior victory, he would seem to have a shot at Hale Irwin’s once considered unapproachable record of 45.

His additional bona fides would appear impeccable. Langer is a Hall of Famer, a former World No. 1 with two majors and 42 victories on the European Tour, a Ryder Cup stalwart as a player and winning captain. His doggedness has enabled him to overcome the putting yips four times, and his legendary attention to detail gained him a reputation as one of the game’s slowest players. He applied those traits to his adjustment after the anchoring ban, saying it took him four to six months to get comfortable with keeping his knuckle away from his body. He is also known for being deeply religious. His integrity as a golfer has always been above reproach.

Langer, who says the accusations have been “hurtful,” insists he is following the new rule to the letter. He and McCarron have both checked with rules officials to make sure they are not anchoring and have been told repeatedly they are not in violation of the rule.

In a joint statement earlier this month with the USGA and McCarron, Langer said: “I believe in honesty and integrity, and I could not live with myself if I broke the rule and did not incur the penalty. I’m certain that I’m not anchoring the putter and that my putting stroke is not violating the Rules of Golf.” For his part, McCarron said: “I’d like to emphatically say that I do not anchor my hand, arm or club against my body during my putting stroke.”

Most importantly, the USGA issued this clearance, which made a point of addressing the subject of loose clothing: “We are confident that Rule has been applied fairly and consistently and have seen no evidence of a player breaking the Rule, which does not prohibit a hand or club to touch a player’s clothing in making a stroke.”

Langer, predictably, has mostly remained stoic. Recently, perhaps to reduce confusion among his peers, he has stopped “anchoring” in his preparatory practice strokes. But when pressed in Wales, he told The Telegraph: “It’s human to be jealous, let’s put it that way. If I was 180th on the money list, I don’t think anybody would be talking about it. But I’ve been No. 1 the last few years.” Fair point, given that Mayfair has escaped public scrutiny.

Bottom line, this controversy should stop. Perhaps the ruling bodies should be more precise with how “intentionally” is meant to apply to Rule 14-1b. Perhaps distributing some high-definition close-ups of the movement Langer’s and McCarron’s top hands as they putt could be helpful and even definitive. But until then, there’s nothing more to discuss. Langer and McCarron—whose version of events as individual players (in the absence of definitive evidence) are to be believed over the accusations of another player according to The Rules of Golf—both firmly contend they don’t anchor. And the rules officials—the final arbiters of the rules—say they don’t anchor. End of story.

There are those who believe that Langer and McCarron are being unfair to the other players by coming so close to a violation. As one PGA Tour Champions competitor told me, “Why are they putting us in this position?”

But the real question is, “Why are fellow players putting Langer and McCarron in this position?” As a society, we might be the “post-truth” era, but as golfers, we should never relinquish the game’s fundamental trust in the player.