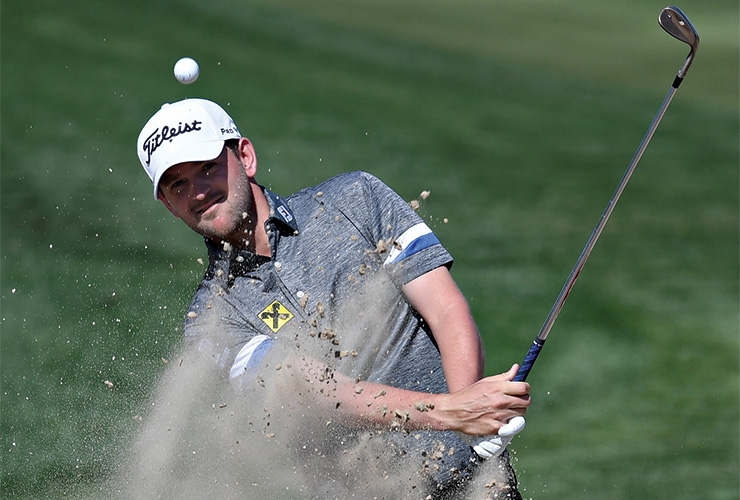 Ross Kinnaird/Getty Images
Wiesberger is joint second after the third round of the Abu Dhabi HSBC Championship.

By Kent Gray
With a bogey-free run at 38 holes and counting, Bernd Wiesberger is showing no hint of a hangover from his near run thing in last season’s Race to Dubai. A third Rolex Series title in six months would be an even sweeter remedy.

The 34-year-old world No.23 has given himself every chance, a near-flawless third round 65 earning the Austrian a share of second place heading into Sunday at the Abu Dhabi HSBC Championship.

Wiesberger will start the final round a stroke behind English pacesetter Lee Westwood and with his game humming like it was for much of his three-win 2019. Indeed, there have been just two bogeys in the first 56 holes, the last of them on the 7th hole (his 16th) in an opening 69.

An eighth European Tour title would be the perfect way to start the new season after the disappointment of his last start at the DP World Tour Championship. Wiesberger arrived at Jumeirah Golf Estates in November as the Race to Dubai pole-sitter but faded to third overall on the back of a T-28 finish and the brilliant play of eventual Race to Dubai champion Jon Rahm.

But that was then and this and now. And the present looks very promising after a solid week from tee to green as Wiesberger looks for a third Rolex gold star to go with his Scottish and
Italian Open victories in July and October respectively.

“If I keep being positive with my drives, stay within my bottle there and just pick my target and hit it there, I’m very confident with my irons right now and the putter is starting to warm up, as well. I’m looking forward to Sunday,” Wiesberger said.

His driving was particularly impressive on moving day, until the 18th when a wayward blow bounced into the desert off a cart path on the par 5. An equally average second shot followed but it didn’t matter with Wiesberger’s blade getting him out of trouble,  his par putt curling into the hole to ensure he kept the bogey-free momentum going into Sunday.

“I tried [used] the width of Abu Dhabi National there, but the rest I was really good off the tee,” he said afterwards.

He missed just one green on Saturday and that miss ended up on the fringe and presented few problems with an increasingly hot putter.

“I just feel quite comfortable. Sometimes with me if I get a good tempo, I like putting on these greens, and I feel like I have a good understanding of the pace of the green.

“You know, if you’re confident on the greens, you can make a few out here, but if you’re just off the green, it makes it a bit more frustrating. But so far, it’s been good on the greens and hopefully I’ll continue that into tomorrow.”