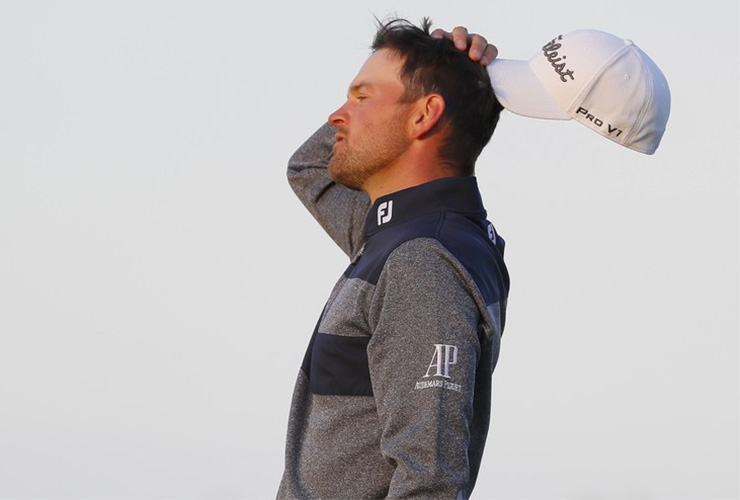 By John Huggan
Before a wrist injury incurred just after the Volvo China Open in late April brought his 2018 season to a premature end, there were those who saw Bernd Wiesberger as a strong candidate to make last year’s European Ryder Cup side. Now, fully recovered and armed with two European Tour victories in 2019, even more, informed observers will surely see the 34-year old Austrian as more than likely to make his debut in the biennial contest at Whistling Straits next year.

The latest — and sixth — addition to Wiesberger’s trophy cabinet is the Scottish Open, seven weeks after his fifth, the Made in Denmark. With an at-times stumbling final round of 69 over the picturesque but largely defenceless Renaissance Club, the former Austrian Amateur champion reached 22-under par for four circuits of the Tom Doak-designed layout to eventually clinch the $1,166,660 first-place check.

That 72-hole total of 262 was only good enough to tie Frenchman Benjamin Hebert, who closed with what was the third 62 of a week dominated by birdies and eagles aplenty. On the final day, only eight members of the 72-strong field shot over-par. As many as 47 broke 70.

Still, it took three more holes to separate the pair, Wiesberger’s par — ironic given that he had made 30 birdies to get into the playoff — at the 18th eventually good enough to end the agony that extended to 8.54 p.m. local time.

“That was something different,” admitted the new champion after holing from four-feet for the win. “I’m grateful at how this turned out. Everything was different from the first three days. This is the biggest event I have ever been in a position to win. So I knew it was going to be tough and it was. I struggled all day and had to dig deep.”

All those birdies and eagles weren’t to everyone’s liking though. Many players, without going public, felt that everything was just a bit too easy in the week before an Open Championship at a no-doubt more fearsome Royal Portrush. “It wasn’t much of a challenge,” admitted former PGA champion Justin Thomas, who finished T-9. “But it’s just because of the weather. When you get a links golf course soft without any wind and sunshine, there’s going to be a lot of birdies. And that’s what happened.”

“Another solid week,” said the Italian. “But I am not too competitive at the moment on such an easy course where all that matters is hitting 300+ off the tee and then make putts. No strategy and no penalties for missing fairways.”

All of which was hardly surprising. That there were low scores to be had on the final day was never really in doubt, but many hearts were gladdened by the sight of at least one of the 62s on the leaderboard. Two weeks after releasing news of mental health issues that blighted his performances over the last 18 months or so, Andrew (Beef) Johnson made 10 birdies and one agonising bogey on the final hole en route to his lowest-ever score as a professional.

In the end, the genial Englishman, famous for his facial hair as much as his golf, was emotional talking about troubles that are hopefully happily behind him. Newly-engaged and with a baby on the way this December, he was close to tears discussing his day on the links.

“I had a really nice stroll with my caddie,” he said, his famously broad smile reappearing, just as his voice cracked. “We were talking about absolute nonsense, all the while just trying to hit the shots and knock in a few putts. I tried not to think about my score, or what position I was in, or Open spots. I was just trying to have fun out there. It was nice.”

Inevitably, however, the subject switched to his heartfelt admission.

“I’ve had a great reaction to the blog I wrote, especially from everyone on tour,” he continued. “I’ve had players tell me that it has helped them, as they have had similar feelings. A lot of guys have been through what I have, which, in a way, is nice to hear. I don’t want anyone to feel down, but it is reassuring to know I’m not the only one. It can get tough out here.

“I want to do so well out here and win tournaments. I think the pressure I put myself under after doing so well in 2016 was too much. Expectations were way too high. Which is what can happen if your perspective and your reality are not right. I should have been having fun with it. So a day like today is special. I got to six, seven, eight under and just tried to roll with it and enjoy it. Whatever I finished with, I wasn’t going to be fussed. I’m happy. Life is good.”

No wonder. As well as a check for $255,360, Johnson’s 19-under par aggregate was good enough to claim one of the last-minute Open Championship spots available to the leading three players from the top-ten not already exempt. The others looking for hotel rooms in County Antrim are Hebert and Nino Bertasio of Italy.

Rob Carr By Alex Myers Welcome to another edition of The Grind where we have never been so ...