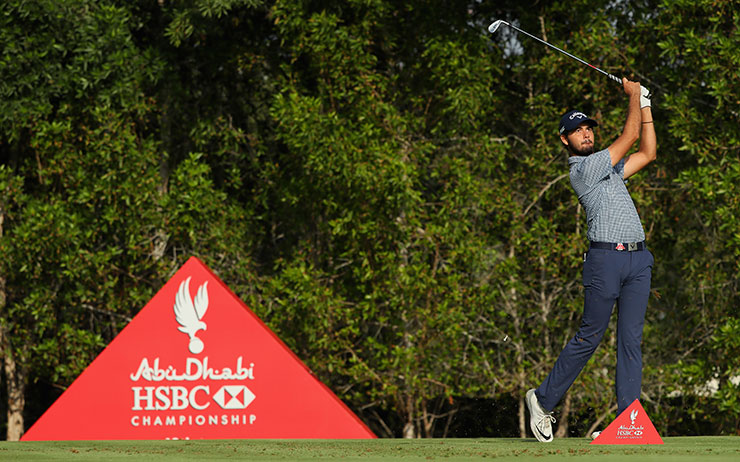 There’s an old adage that says you’re better off being lucky than good at golf but Australian amateur star Curtis Luck is proof you can be both.

The 20-year-old from Perth, the reigning U.S. and Asia Pacific Amateur Champion, announced himself to the European Tour Friday with a second round 65 to roar into the weekend tied 12th at -7 in the Abu Dhabi HSBC Golf Championships.

After struggling with the pace of The National’s greens Thursday, Luck got his putter going with a faultless seven-birdie loop to be just four shots off the lead midway through the second round.

“Yesterday was a bit rough so to come back and obviously have a good one today is I guess good for the confidence for the rest of the week.,” said Luck who eagled the par 5 second and birdied the last in the first round but cancelled the gains out with three bogeys.

“Hopefully this form continues, and yeah, I’m ready to get to the weekend and give it a crack.”

Luck may be an amateur but he’s no novice at the pro level having won the Queensland Open in October, the first amateur to achieve the feat since 1991. He ended 2016 on a high with a creditable T11 at the Australian Open at Royal Sydney where he teed it up with eventual champion Jordan Spieth a fortnight after being paired with former world No.1 Adam Scott at the Australian PGA Championship.

He’ll draw on those experiences as he goes in search of a low weekend.

“Just looking at the leaderboard, I’m still going to need a big weekend to catch up. There’s definitely low scores out there. So I’m expecting to see the leaderboards keep climbing higher and higher with these guys,” he said.

“I’ve just got to try to keep up, post more good numbers and see Sunday afternoon I guess.”

Regardless of what transpires, Luck has more than justified his sponsors invite to Abu Dhabi which is all part of a wider reconnaissance mission before he turns pro after April’s U.S. Masters. He’s also qualified for the U.S. Open at Erin Hills and the 146th Open Championship at Royal Birkdale on the back of his amateur awesomeness last year.

“Every bit of experience I’m getting over the next three months is crucial to when I finally get ready to turn pro and play events like the Masters. Just the overall, being here, the circumstances and getting to play with such great players is awesome.

“I had some good conversation with Spieth and Adam Scott [about Augusta National]. I think the biggest thing that comes in common with what they are saying is probably that the course just transforms overnight between Wednesday and Thursday; it’s a completely different golf course.

“I’m excited to get there and just obviously see the place. I think that’s going to be the biggest thing that I have to get my head around, but yeah, so excited.”