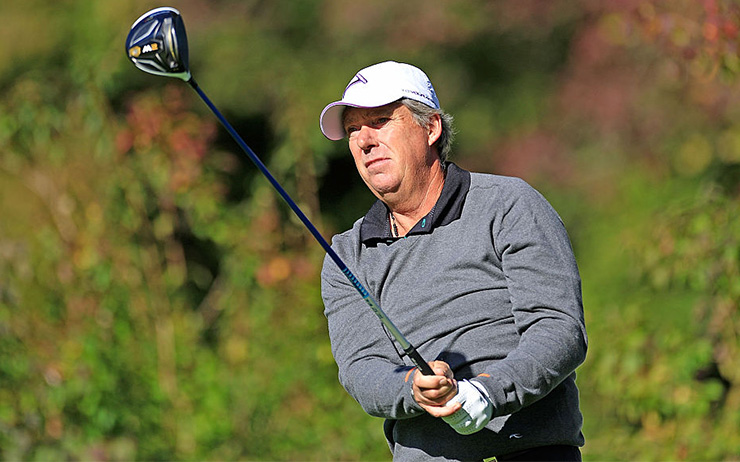 arry Lane believes the ability to quickly park previous attempts on any given hole will be key when Sharjah Golf & Shooting Club becomes the first nine-hole course to host a European Tour sanctioned event this week.

The 56-year-old Englishman is one of the early favourites for the Sharjah Senior Golf Masters presented by Shurooq, the European Senior Tour’s $425,000, 57-player, 54-hole season-opening event.

Lane is impressed with the Peter Harradine-designed layout and is predicting a stiff test.

“It’s a lovely course, a proper nine-hole course, and it will make a tough 18-hole course,” the 1993 Ryder Cupper said.

“I’m not quite sure what the final score will be to be honest. It’s difficult to get close to the flags and some of the greens are tricky to read, it has been set up really nicely for a tournament. We play from different tees on the par threes and par fives, which I think is very sensible.

“I think the hardest challenge will be forgetting what you had done the first time you played the hole and refocusing. It will be different for us, but anything different is good.”

Lane, a five time winner on both the main and senior European Tours, enters Sharjah as the most recent senior tour winner after clinching last year’s MCB Tour Championship in Mauritius.

“The game seems to still be there and I’m really looking forward to this season,” said Lane who collected €128,760 for finishing fifth on last season’s moneylist, the fifth time in six years that he has finished inside the order of merit’s top 5.

“I had six second-place finishes and a few thirds since the last time I won on the Senior Tour in 2012. I hadn’t realised it had been so many years between wins.

“I played well from September onwards and carried it through. I feel like I’m playing as well, if not better, than I was in Mauritius. I went over to America at the start of the year and practiced and played a lot.”

With so many forced carries over water, Lane’s length off the tee is set to be an asset in Sharjah where reigning Senior Open champion Paul Broadhurst, last season’s order of merit champion and another long baller, is the firm favourite. The tournament, like most, will ultimately be decided on the greens though. While smooth and true and likely to be sped up for the start of the tournament on Thursday, they were running on the slow-ish side in Tuesday’s Pro-Am which will take the field some time to adjust to.

As the only player to play the first 25 Dubai Desert Classics, Lane is familiar with desert conditions and ready for the challenge of playing in Sharjah for the first time.

“I have played well in the Emirates over the years, I finished third in Dubai twice and sixth four times.

“I like coming here, and at this time of year the weather is perfect. It’s a shock to the system coming to 30 degrees, I live in Gothenburg in Sweden and it has been minus 15 over there.”

Entry to the Sharjah Senior Masters, which begins at 7am Thursday, is free.