Banking on a winner with the Abu Dhabi HSBC Championship 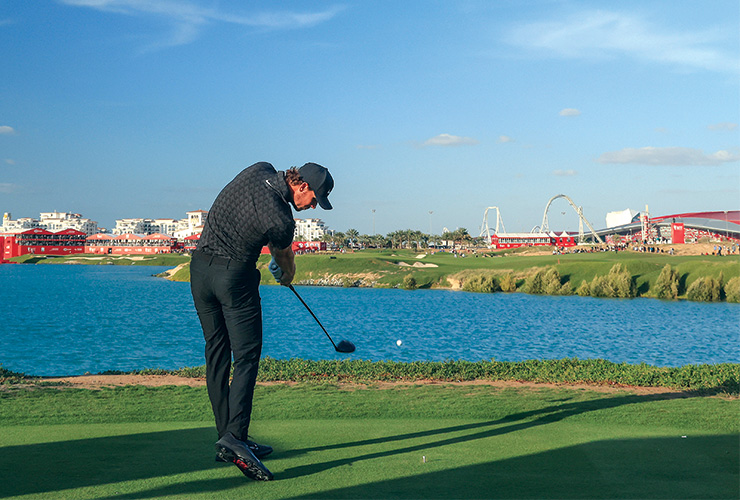 It seems like only yesterday that a field including Sergio Garcia, Charl Schwartzel, Ian Poulter and Paul Casey lined up for the inaugural Abu Dhabi HSBC Championship in the UAE capital.

Well, OK, maybe not yesterday, but certainly does not feel like 18 years since Chris DiMarco held off Henrik Stenson to claim the now-famous Falcon Trophy and the $330,000 top prize from the $2 million pot.

Now the DP World Tour Rolex Series event returns to its new home at Yas Links, with a record $9 million on the line.

While that inaugural field included icons whose best days are behind them, such as Colin Montgomerie, Miguel Angel Jimenez, Vijay Singh, Gordon Brand Jr and John Daly, the longevity of athletes in the game of golf is clear to see when you consider how many (Garcia, Poulter et al) are still competing at the top level of the game.

Di Marco may not be among them, but there will be a hatful of former champs on show on Yas Island from January 19 to 22, including two-time winner Tommy Fleetwood, Shane Lowry, Tyrell Hatton and defending champion Thomas Pieters, who defeated Rafa Cabrera-Bello and Shubhankar Sharma by a stroke last January, when the event took place at Yas Links for the first time after relocating from Abu Dhabi Golf Club’s National Course.

Englishman Hatton, who won his fourth Rolex Series title when he secured the Falcon Trophy in 2021, is keen to get back on course after a less than ideal title defence last year  — and being less than impressed with the set-up on the 18th hole at Yas Links. (“I would love for a bomb to drop on it and blow it up to oblivion, to be honest,” he said.)

A year on, he seems to have cooled his temper and warmed to the course. “I am looking forward to returning, it’s a tournament I have a good record in,” he said. “The win in 2021 is one of my greatest memories and it is always an enjoyable experience to begin the year with such a big event in Abu Dhabi.”

Fleetwood, the 2017 and 2018 champ, added: “I’ve always enjoyed starting the year in Abu Dhabi at this prestigious tournament. I’ve based myself in the UAE, it’s a brilliant part of the world, and a place I’ve been successful on the golf course, so it will be nice to play in front of family and friends to begin my DP World Tour season. Yas Links was a new challenge and look forward to coming back.”

Irishman Lowry, who claimed the crown in 2019, concurred. “The HSBC is always a great tournament and the perfect start to the 2023 season,” he said.

“Coming back as a past champion is always nice and Yas Island is a world-class destination for sport, plus you add in the amazing fans, and it makes for a winning atmosphere.”

Lowry’s fellow Irishman Séamus Power had a breakout season in 2022, winning the Bermuda Championship in October for only his second elite tour title at the age of 35, and now he is set for his Abu Dhabi HSBC Championship debut.

“I have heard great things about the event and I am relishing the chance to take part in it,” he said. “I’ve played well on the PGA Tour recently so hopefully I can bring my game to Abu Dhabi and take a step closer to that [Ryder Cup] team at Marco Simone in September.”

New Zealand’s Fox enjoyed a career-best year in 2022, when he twice won on the DP World Tour — including in Ras Al Khaimah — and finished the season No. 2 in the DPWT Rankings.

“The events in the Middle East at the start of the year are always great fun, so I can’t wait to get on Yas Links in January,” he said. “I’ve played some really good golf over the last 12 months so hopefully I can continue that.”

Molinari, who will return to the event for the first time in nine years, added:  “I haven’t played in Abu Dhabi for a long time so I’m looking forward to getting back there and trying out a new venue. I’ve got a pretty good record in the event so I’m hoping to resurrect some good memories.”