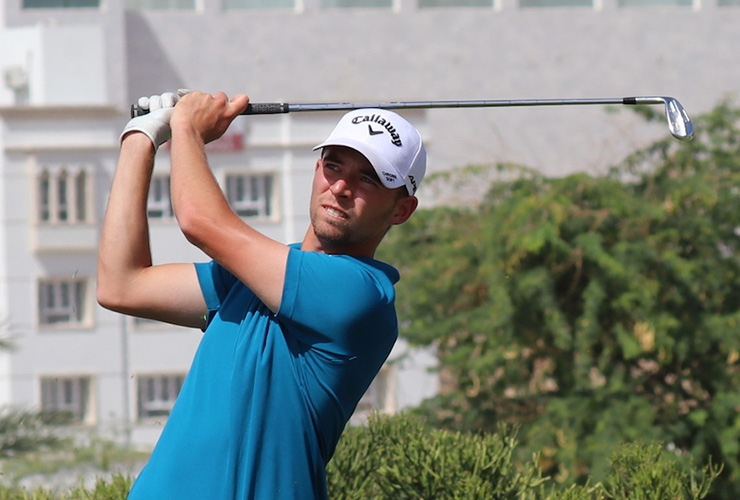 Photo by Joy Chakravarty/MENA Tour by Arena
England’s Bailey Gill in action during Wednesday’s final round in Muscat.

By Kent Gray
Bailey Gill planned to tee it up at the $75,000 Royal Golf Club Bahrain Open next week. Instead he’ll be rubbing shoulders with the likes for former world No.1 Martin Kaymer at the European Tour’s Oman Open, an event with a cool million extra greenbacks on the line. Amazing, potentially life-changing things like that happen to good players on the MENA Tour by Arena.

The Worksop lefty birdied his last three holes and five of his last six in a bogey-free 65 to get to -15 and win by one from overnight leader and room-mate David Langley. Scot Craig Ross, who briefly owned the lead by two strokes at the turn, settled for third at -12, a shot ahead of impressive Dubai-based Indian teen Arjun Gupta who signed for a bogey-free 66 and his best MENA Tour result. Gupta played his final 36-holes in 11-under-par to seal his second amateur title on the regional development circuit after he shared that honour with pal Josh Hill at last November’s Tour Championship.

CHAMPIONS!!
England’s @baileygill1997 (16-under par) and India’s Arjun Gupta are the Professional and Amateur winners of the Ghala Open.
Gill’s reward, apart from the $13,500 cheque, is a spot in next week’s Oman Open on the @EuropeanTour. pic.twitter.com/Ko88ScAd8z

But this was Gill’s day, a scarcely believable pro breakthrough after he wasted a golden opportunity at the inaugural NEWGIZA Open last week.

The southpaw started the final round in Cairo just a shot out of the lead but faded to a share of 12th. They say you learn most not from your victories but your disappointments and that clearly proved the case after Gill signed for a closing two-over 74 at NEWGIZA Golf Club, the equal worst score of anyone who finished in the top 40.

“This is fantastic,” said Gill. “I have been waiting for some time now for this to happen. It did not happen in Cairo, but I am glad I could hang on and win here in Oman.

“I was disappointed last week, but I came here knowing I was playing solid. I have been playing good golf for some time now, just struggling to get everything together and I am glad I managed to do that.”

Get it done he surely did, but not without a few nerve-jangling moments down the stretch. Twice on the last two holes weak, pushed drives looked to have cost the Lindrick Golf Club member but he recovered both times with a pair of spectacular chips to tap-in range. Check them out:

With this exquisite chip to less than 2 feet, @baileygill1997 has taken a one-shot lead at -15 going into the final hole of the Ghala Open. pic.twitter.com/928YvaYwVR

That brilliant chip by @baileygill1997 left him with his short putt to make a birdie and edge ahead of a fast-charging @DavidLangley59 by one shot… pic.twitter.com/aMI7p7tLlh

“Those two were tough shots on the last two holes. I hit a horrible tee shot on the 18th hole and there was a lot of pressure when David holed his putt for a birdie on the last. David really played great despite the poor start he had, especially on that back nine.”

“I’m delighted to win the Ghala Open and I can’t wait to get going next week at the Oman Open at Al Mouj Golf. It will be my first European Tour event so I’m really looking forward to the challenge of playing with some of the best golfers in the world.

“I have only been a professional now for around five months so I’m really happy this opportunity has come to me so soon and I hope I can take advantage of it.”

Langley, seeking a second MENA Tour title inside three weeks, was left to rue a double-bogey start in a topsy-turvy closing 67. The 25-year-old Marlow rookie bounced back immediately with a birdie two but bogeyed the par-5 3rd before reaching the turn in 38 strokes, two over. He triggered a charge by driving it just short of the 375-yard par-4 10th and coolly holing the eagle putt before rattling off five birdies in his final seven holes for a homeward nine played in 29 strokes.

One of our spectators took this video of @DavidLangley59 driving to the edge of the 375-yard par-4 10th green and sinking his eagle putt to get back to even par for the round. pic.twitter.com/fxExKMJtzn

Sadly for Langley, the brilliant back-nine left him just shy of playoff although he does have the consolation of a near $10,000 lead over Gill in the Journey to Jordan money-race heading to Bahrain.

“I am gutted, but after that finish, if I had to lose to someone, I’d rather it be Bailey,” said the 25-year-old, also playing his first full season as a professional.

“I was rooming with him last week in Cairo and I know how upset he was after the finish there and credit to him for getting it done.

“I hit a perfect tee shot on the first and made a poor swing with my second. Obviously, the adrenaline was pumping a bit. That double affected me on the fourth hole, which is a par-5 and I could not make a birdie there. Being two-over after four on an easier stretch was not ideal, but I stayed patient and went on a roll on the back nine.

“A win here would have possibly got me two European Tour starts [Oman for winning Ghala Open and Hassan Trophee II for topping the Journey to Jordan at the halfway stage], so there was that pressure. Good to see Bailey getting the Oman spot and I am in a nice position to get into Morocco after this.”

Gupta, who turns 16 in May, showed once again why he is considered one of the brightest prospects in the region as he notched his first top-five on the MENA Tour and came to within one shot of earning his first-ever Official World Golf Ranking (OWGR) points. 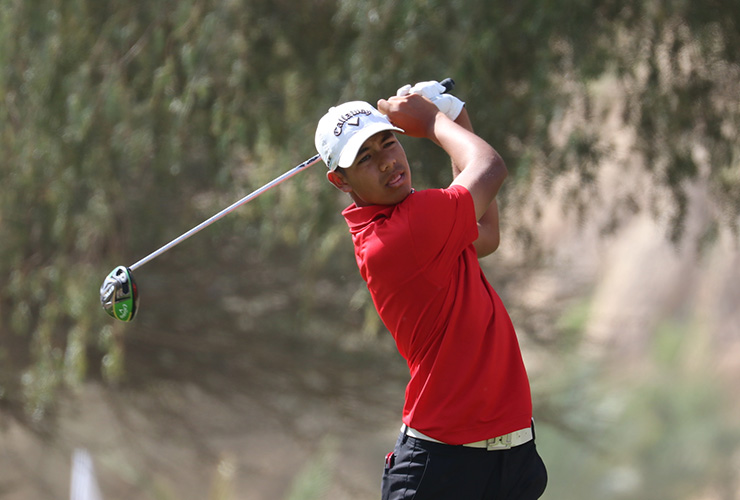 “I am happy with my finish. The whole week my short game and my putting was very good. I could have probably driven the ball a bit better, but I can’t complain after such a finish,” said the Dubai-born Gupta, who is coached by Jamie McConnell at the Claude Harmon III Performance Golf Academy in Dubai.

“I want to win the Amateur Journey to Jordan this year and this is a good step in that direction. I also want to win a tournament on the MENA Tour and this gives me confidence that I am close.”