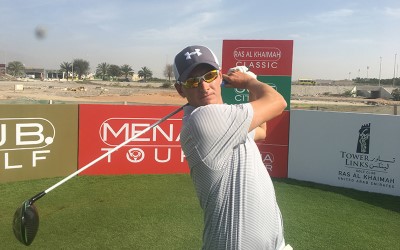 Englishman Daniel Owen fired his second successive – and this time blemish free – 66 to close in on a maiden MENA Golf Tour victory at Tower Links Tuesday.

The Bahrain-based 27-year-old touring professional will take a five stroke lead into the final round of the Ras Al Khaimah Classic on Wednesday over a group of five players including three-time MENA Tour winner and European tour veteran Stephen Dodd.

After mixing two eagles and five birdies against three bogeys in Monday’s opening round, Royal Golf Club-aligned Owen had his driver going to rattle off six birdies in a flawless six-under circuit to be -12 for the tournament.

“I have been coming here since 2011 and know the course pretty well. It suits my eye. I did miss a couple of greens, but never really got into much trouble. I gave myself good opportunities and made a few putts,” Owen said of his sizzling second round on a steamy RAK day.

Owen will be looking to kick on after racking up a string of top five finishes on the tour.

“Obviously, it’s hard to ignore where I am, but at the same time the game plan doesn’t change. I will try and make some early birdies to kind of settle the nerves and, hopefully, get the job done this time around.”

As a three-time European Tour winner Dodd, who mixed six birdies with a lone bogey on the tough 3rd hole in his second-round 67, stands as a significant threat to Owen.

The Welshman made his European Senior Tour debut at the Senior Open Championship last July and went on to win the 2016 Senior Italian Open, a feat which showed his hunger remains as keen as ever.

Elsewhere, Spain’s Francisco Perez and England’s Paul Dwyer, who were among a four-way tie for the lead overnight, left themselves with work to do after carding respective rounds of 73 and 72 to be at -6.

England’s Lee Corfield, a four-time winner on the MENA Tour, moved into a tie for 10th on -5 after a second round 71, one ahead of Craig Hinton, the winner of the 2016 MENA Tour Order of Merit title, as experienced Andrew Marshall settled for a tied 17th after a shooting a two-under 70.

England’s Todd Clements carded a 69 to top the amateur division on -3, four shots ahead of Switzerland’s Dubai-based Michael Harradine, who backed his opening 71 with a 74.

UAE’s Ahmed Al Musharrekh returned a second-round 75 for 36-hole total of seven-over-par 151, missing the cut, which was made at two over, by five shots. A total of 54 professionals and nine amateurs have made it to the final round.