Bad weather, soft conditions keep players from getting much local knowledge at Pebble ahead of the U.S. Open 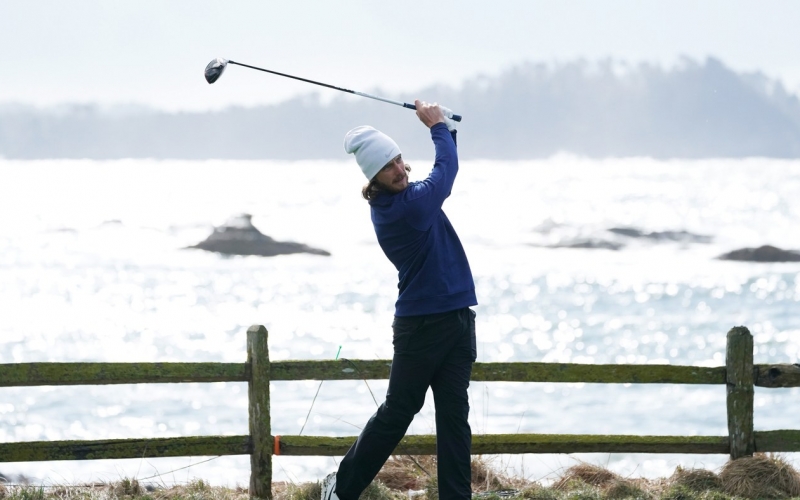 By Dave Shedloski
PEBBLE BEACH — There are lyrics to an old song by The Fifth Dimension that come to mind while surveying the sodden landscape at the still-to-be-completed AT&T Pebble Beach Pro-Am. Something about lines and circles and angles—features that observant PGA Tour pros likely were assessing last week as they made their way along Pebble Beach Golf Links.

It was about all they were able to assess as they tried to get a sense of what they might encounter when the 119th U.S. Open returns here in June. The rain-soaked seaside layout, which this year celebrates its centennial anniversary, yielded a few clues to potential Open participants–but only a few. Barring some unforeseen climatic event, Pebble should play firm and fast and nasty in four months time. Basically, the exact opposite of the slow, sloppy slog just completed.

“It should be a totally different golf course in June, so I’m not sure you can learn much of anything,” said Dustin Johnson, who struggled to a final-round 82 in the 2010 championship, helping clear the way for Graeme McDowell’s triumph.

Not only will greens run out, but the fairways will be hard, which means only well-shaped and accurate tee shots will avoid the rough (expected to be much higher than this past week) or, on a number of holes, that big hazard known as the Pacific Ocean, which lurks more ominously because the USGA, following its 2010 formula, will have the grass shaved to the edge of the boundary.

“If they can get it as firm as it was nine years ago, it will be an unsettling experience,” McDowell said with a grin, knowing that his even-par 284 aggregate score was good enough to beat Gregory Havret by a stroke.

RELATED: USGA brass watching Pebble Beach closely as they prepare for the U.S. Open in June

McDowell, in fact, shot the second lowest score in the previous two U.S. Opens combined at Pebble Beach, bettered only by Tiger Woods in 2000 by a mere 12 shots.

The lone piece of useful information gleaned from the visit to the Monterey Peninsula was the overall look of the golf course. The fairways already have been narrowed in preparation for the championship, giving players an idea of the lines off the tee. Cliff Hawkins/Getty Images
Johnson has history at Pebble, but said there wasn’t much to learn this week ahead of the U.S. Open in June.

“Yeah, the fairways taken in is what you notice immediately,” said Jordan Spieth, the 2015 U.S. Open champion and 2017 winner of the AT&T Pro-Am. “The rough’s actually lower than it has been in past years for this tournament, but the fairway lines … like our yardage books look different from last year to this year. They have started to take them in already and you’re starting to see the fairways that we’re going to see.”

“I think the mowing patterns are already set for June, it looks like,” Paul Casey said. “No. 8 is the biggest change. Used to aim it, I know the gentleman well, used to aim at this gentleman’s house on the hill. And now you aim at the gentleman next to him. It’s a 15-, 20-yard shift, that fairway to the right, to bring the cliff into play and the water into play. So I know the lines off the tee, so I’m still getting used to them. That’s changed some clubs because now you got to play a little bit shorter on 8 because you don’t have as much room to play with. That’s going to help. Other than that, every time I play Pebble I learn a little bit.”

“The 11th hole, the line there is totally different than it has been in the past,” noted Brandt Snedeker, noting how the USGA shifted the fairway on the uphill par 4 far to the left, which actually affords a better angle into a difficult green. “It certainly isn’t going to be the same four months from now, but it doesn’t hurt me being here seeing how it all sets up. It’s largely the same as 2010, but not totally. There are subtle differences.”

McDowell said that USGA CEO Mike Davis, who played for the first time in the Pro-Am, apprised him of subtle fairway contour changes on a couple of other holes and asked for feedback.

“You can see what kind of test it’s going to be,” said Brandon Grace, who made just his second visit to Pebble Beach. “One hundred percent I’ve learned a lot. It’s going to be a great test; you see that even now. What a golf course.”

England’s Tommy Fleetwood, who shot a final-round 63 last year at Shinnecock Hills to finish runner-up to Brooks Koepka, was making his maiden appearance at Pebble Beach. It didn’t matter to him what the weather was like. He was going to take away a feeling of being better prepared for the championship.

“You’re playing for two pin positions this week, really, in preparation at Pebble Beach, but you know that there’s a U.S. Open going on in a few months’ time, so you have a look around,” he said. “It’s playing so wet and soft that you can only … picture stuff, and you have a look and you can try certain little shots out, but it’s nowhere near what it’s probably going to be like.

“But still,” he added, “it’s a massive game to come here. And there’s so many guys that played the PGA Tour for a long time will have been here. And they know it, they feel comfortable. For me this is the first time, so any like gain or advantage that I would have had just turning up in June or whenever the U.S. Open is, is much more positive and good for me.”

In a major championship, any little advantage helps, any angles welcome.