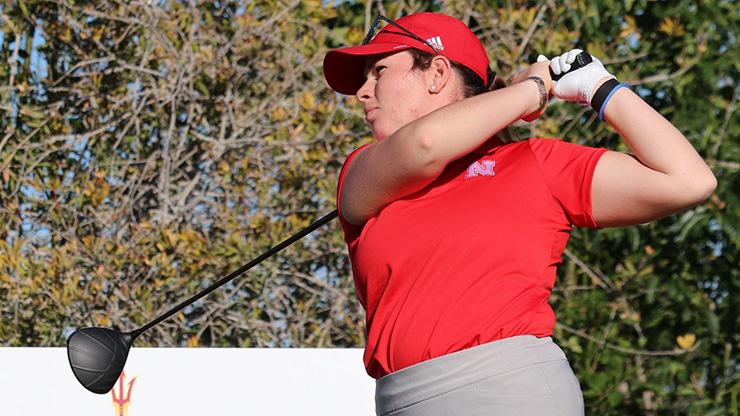 Kate Smith is one of the most decorated athletes in the history of Nebraska women’s golf. (Photo courtesy of Nebraska Athletics)

By Tod Leonard
To be sure, Kate Smith is an accomplished golfer. The fifth-year senior at the University of Nebraska has twice won the Minnesota Women’s State Amateur. She is one of the Cornhuskers’ all-time most decorated golfers, including being the first from her program to capture the Big Ten’s Mary Fossum Award for the best stroke average relative to par among conference players in the 2019-20 season.

Yet the 21-year-old probably gets a bit overlooked when it comes to big-time tournaments with a heavy mix of peers who have played all over the world. And there is Smith’s World Amateur Golf Ranking, which currently is 134th.

That’s why the first round that she is putting together in the Augusta National Women’s Amateur is a bit of a stunner. In an 82-player field that includes many of the top-ranked women in the world, Smith motored out ahead of all of them in the first round, making four birdies in her first 11 holes to be in the lead at four under par when play was suspended because of weather.

Only five other players were in red figures at Champions Retreat, including two who were comfortably finished in the clubhouse with one-under 71s—reigning U.S. Women’s Amateur champion and World No. 1 Rose Zhang and Spain’s Ana Peleaz Trivino.

Twenty-nine players were unable to finish their rounds and were set to come back on Thursday morning to complete the first round before playing the second round at Champions Retreat. The top 30 players after two rounds will play the third and final round on Saturday at Augusta National Golf Club, following a practice round for all competitors at ANGC on Friday.

Among the golfers who were still on the course and having strong rounds were Linn Grant, the Swede from Arizona State who won three consecutive college tournaments heading into the ANWA. She was joined at one under (through 12) by Denmark’s Karen Fredgaard (through 15) and Finland’s Kiira Riihijarvi (through 13).

Zhang, a 17-year-old from Irvine, Calif., who finished T-17 in the inaugural ANWA in 2019, birdied the second, third and 17th holes in her round. Trivino, 23, opened her first ANWA with two birdies and a bogey.

Smith, a Minnesota native, is playing the ANWA for the first time, and though she is ranked outside the top 100 in the world, she qualified because she was one of the top 30 Americans in the rankings when the invitation list was frozen last year due to the cancellation of the ANWA due to COVID-19. In the current rankings, Smith currently is the 27th American.

She has been on a roll as of late after opting to take a fifth year at Nebraska when the end of the 2019-20 NCAA season wiped out by the coronavirus. In her first four years at Nebraska, Smith had not won a college tournament, but she finally broke through earlier this month, capturing the Allstate Sugar Bowl Intercollegiate at English Turn in New Orleans. The victory followed two other top-6 finishes in the spring portion of the Huskers’ schedule.

Augusta National and the Masters is long on lore. That’s to be expected for a tournament that’s...