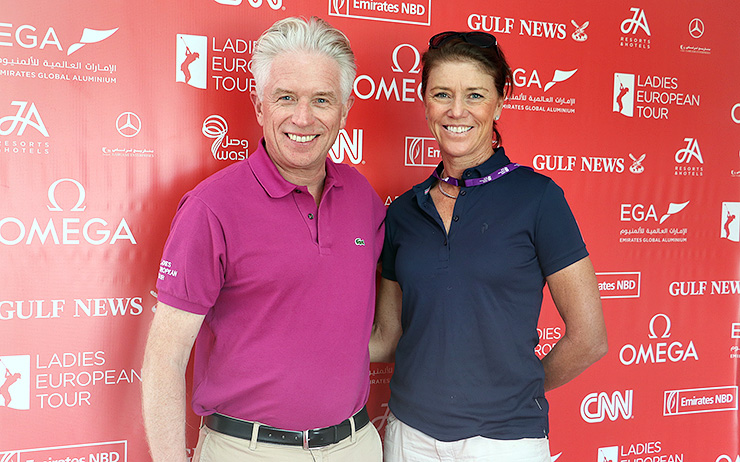 The combined US$1 million prize fund for its new four-event Australian Swing in February falls short of the purses the Ladies European Tour (LET) covets but is a start down the tour’s “more flexible” road to recovery, executive chairman Mark Lictenhein says.

The 2018 LET season will again open at the Oates Victorian Open (Feb. 1-4) before new stops at the Actewagl Canberra Classic (Feb. 9-11) and two smaller, yet to be confirmed events in New South Wales.

They are part of a co-sanctioned agreement with the Australian Ladies Professional Golf Association (ALPG) as the embattled LET strives to bolster this season’s disrupted calendar, culled by five events to 15, to at least 20 events in 2018.

Lictenhein said the LET aimed for “at least €300,000” purses at events in Europe which means the Australian swing events fall nearly $50,000 short of that target. But the LET needed to consolidate playing opportunities first and foremost which was achievable given the “great tailwind now behind women’s sport in general and golf in particular.”

“I think when it comes to co sanctioned events and we’re being invited to somebody else’s event, it’s a little bit rude to be dictating terms on that,” Lictenhein said at a media roundtable with LET Player President Helen Alfredsson during this week’s $500,000 (€425,000) Omega Dubai Ladies Classic.

“Again, it’s a question of working together to grow them. We’ve got $1 million U.S., at play in Australia over four weeks. As Helen says, they are a bit imbalanced at the moment, but I think that’s something we can work with the Australians to improve.”

With the purse for the Victorian Open €350,000 last season, it means the prize fund for the NSW events is likely to be less attractive for players although Alfredsson believes the LET’s membership will be simply grateful for a run tournaments in the same territory.

“Even though two of them are a little smaller, there’s one long trip and they get to play four events during that time. And some of them are only a little [travel] in between, so they won’t spend a lot of money,” said Alfredsson.

“Even on the LPGA, you go one week to Europe and then back; and then you go one week to China and then you go back. These are very big expenses. So if we can put more effort into having Australia and maybe South Africa, maybe Scandinavia three events, then in the beginning, we don’t have to have huge purses, but at least we know they don’t have these huge expenses just to go there.”

Alfredsson said the players were all for swings like Australia to negate travelling expenses.

The retired Swedish pro, who won the 1993 ANA Inspiration among her seven LPGA and 11 LET titles, revealed she budgeted about $2000 per week in her playing days which covered her caddy and swing coach on an hourly rate. She said today’s players may need to cut their cloth to the current market conditions by rethinking all the mental, swing, short game and physical coaches who were “all taking a bunch of money.”

Lictenhein said the LET was open to playing the Fatima Bint Mubarak Ladies Open at Saadiyat Beach and the Dubai Ladies Classic back-to-back in 2018 –  like the men’s European Tour will do with Abu Dhabi and Dubai for the first time next month – “if that’s what we want to do.”

He said there was enough “political will” to believe the Qatar Ladies Open would return to the 2018 schedule and acknowledged “discussions with other gulf states” that he hopes will eventuate into events from 2019 onwards.

Alfredsson admitted 2017 had been “hard for really anybody” especially lower ranking members who hadn’t qualified for the lucrative majors on the LET schedule, the British Open and the Evian Championship.

Players had been forced to take part-time jobs and “then you can’t really practice so it becomes sort of this bad cycle. “

But while she “completely understands the [player’s] frustration” she now has a greater appreciation of the political challenges, sponsorship issues and even regional conflicts facing the game after sitting on the LET Board.

“I just want to make a point that, and I said this to the girls, that it was [similar to when former LPGA commissioner] Carolyn Bivens had left and it was really a crisis in the States, as well. Mike [current commissioner Mike Whan] actually had a tournament in Phoenix, the Founders Cup, that he introduced for no prize fund, and I said to the girls, not that we should not play for money, I understand that.

“That’s how desperate it was just to be able to [establish] a relationship and showcase what it is to have a tournament. But what that has now grown into now is because of, as Mark is saying, creating relationships [like] in Australia….it’s a process.”

Lictenhein said rebuilding relationships with national federations was key to rebuilding the lost European part of the LET schedule which had seen the Spanish and German Opens along with Scandinavia events fail.

He acknowledged the former LET leadership had become too rigid in setting out its framework for events, including the costly prerequisite for television coverage.

“I think we’d kind of developed a one one size fits all proposition, which was heavily predicated on live television, even for new events.

“So we need to be more flexible in terms of what it takes to have an LET event, because clearly, once you have live TV, budgets quickly get over a million dollars, and that’s not necessarily the right starting point for everybody.

“You have to customise the product to what the local market needs, and that might not involve live television, or it might.  It depends on what it is.

“If people haven’t got enough money for the prize fund to start with, then we can work together to find solutions to address that or to grow the event as we go forward.”

Lictenhein said that could mean novel formats in countries where live TV was not the sponsor’s main motivation.

“There are a lot of events particularly in smaller countries where there’s no tourism aspects. If you’ve got a sponsor that is much more focused on customer entertainment, where the Pro Am is the most important part of what they are doing; maybe they want two Pro Ams before the tournament, two Pro Ams and a three day event, for example; or they want a lot of hospitality, and they are really not so concerned about the media side to it. “

“We can’t dictate terms. The promoters are the key, the lifeblood to the tour, and we are not Formula I, we are not going around just bringing a machine and the circus comes to town. We are heavily reliant on commercial partnerships but other people are taking the commercial risk. They understand the local market much better than we do, and can make it happen.“

On both the sponsorship and media front, Lictenhein said LET had to “get away from us competing with men’s golf on men’s terms” to attract new sponsors and become commercially viable.

“The reasons why girls play sport is different from the reasons that men play sport. UEFA has done research on this and I’ve been working with them in Europe on this because I think we can show to sponsors that we actually can be a different kind of product, a more lifestyle component, fashion, conduit for the next generation. A lot of things where the men probably aren’t able to compete.

“I’m absolutely fine with us being on the Golf Channel, SKY Sports Golf, I think that’s important, but we need to be in other places, as well. We need to be in places that are attractive to women, to young girls, to families, and that’s where social media channels become so important.”