As 50 approaches, don’t give up on Phil Mickelson 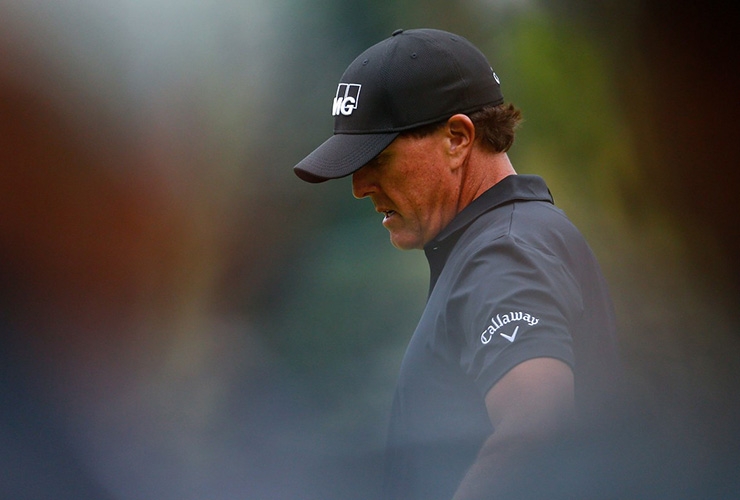 Mickelson finished second in the desert a year ago, losing improbably to tour rookie Adam Long when Long drained an 18-foot birdie putt on the 72nd hole to win by a stroke. In his next start, Mickelson won at Pebble Beach for the fifth time in his career and had the golf pundits abuzz with the notion that he might finally complete the career Grand Slam by winning the U.S. Open at Pebble on his 49th birthday—June 16.

Mickelson finished T-52 at the Pebble Open. In fact, during the rest of 2019 he played about as poorly as during any extended stretch in his remarkable career. In his last 16 starts of the year, he missed seven cuts and had one top-30 finish—at the Masters (T-18), where he could probably make the cut playing right-handed. He began the 2019-’20 season with four starts that included another missed cut and finishes of 61st, T-31 and T-28. And by year’s end, he had fallen out of the World Top 50 for the first time in more than a quarter-century.

He also didn’t play in the Presidents Cup, saying, “I’m not playing well enough to deserve a spot,” when Tiger Woods passed on making him a captain’s pick. It was the first time since 1993 that Mickelson failed to make a Presidents Cup or Ryder Cup team—an astonishing string of 24 consecutive appearances.

So, as he begins the year in which he will turn 50, at an event he has won twice, is it time to write off the man his myriad of fans love to call Lefty? Even though he’s actually right-handed? 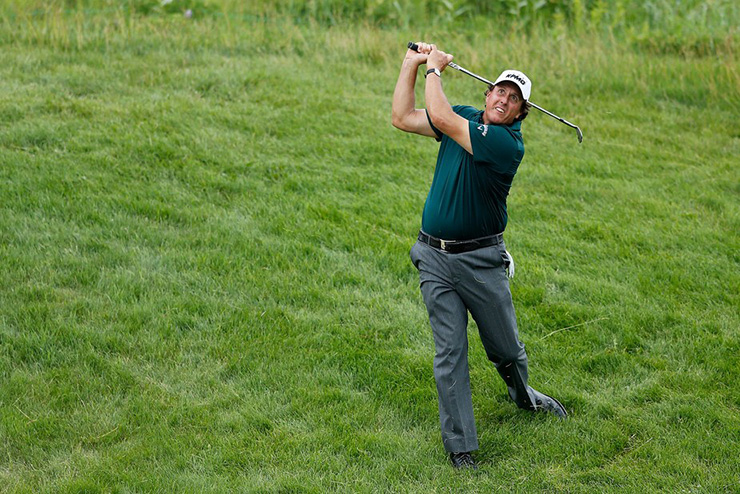 Mickelson’s 2019 season saw him win for a 44th time on the PGA Tour, but also fall out of the World Top 50 for the first time since 1996. (Michael Reaves/Getty Images)

Golfers are frequently written off prematurely (see Woods, Eldrick T. and Nicklaus, Jack as prime examples) largely because they can re-find their game well into their 40s, long after most stars in other sports have retired to spouting clichés from a TV booth.

Mickelson was 33 before he won his first major title and had been labelled a guy who could win non-majors, contend in majors and make huge money off the golf course, but couldn’t win on a Sunday that truly mattered. He had 16 top-10s in majors, including a second in the U.S. Open; a second in the PGA and four thirds in the Masters—including three years in a row—2001, 2002 and 2003. He was frequently on or around the podium, but never at the top of it.

But then came 2004 in Augusta, when Mickelson birdied four of the last seven holes, including the 20-footer at 18 that produced arguably sport’s most earthbound leap, to come from three strokes back of Ernie Els and finally become a major champion. From there he added four more majors wins—the 2005 PGA, the 2006 and 2008 Masters and the 2013 Open Championship.

The Open Championship was, remember, the major Mickelson couldn’t win. Among those 16 top-10s pre-Augusta 2004—were zero top-10s in the British Isles. Zero. In 1998, when I was working on my book on the majors, I asked Mickelson about his futility playing in golf’s oldest championship.

In 2004, after his win at Augusta, Mickelson finished third at Troon. That got his attention. Soon after, instead of flying over on the Monday night of tournament week, he started coming a week earlier and playing in the Scottish Open. He began to see the charm of the place and the golf courses. In 2013, he won the Scottish, and a week later, he shot a final-round five-under-par 66 and won the Open Championship—arguably his most emotional victory, because he had honestly believed he would never win in Scotland

He was 43 when he won at Muirfield, but when he didn’t win for the next four years-plus, few were surprised. Sure, he still desperately wanted to win his country’s national championship, but his last best chance had probably gone a-glimmering at Merion, a few weeks before he hoisted the claret jug.

It wasn’t as if he didn’t have moments. He finished T-2 along with Justin Rose at the 2015 Masters and lost a dramatic duel to Henrik Stenson at Troon in 2016, then played an important role in the U.S. team’s Ryder Cup victory at Hazeltine. But his quest for a U.S. Open victory became a windmill: Since his loss to Rose at Merion—Mickelson’s sixth second-place finish in the championship—his best finish has been a T-28. This year, he will return to the scene of perhaps his worst Open crime: the brain-dead double bogey in 2006 on the 18th hole at Winged Foot that turned a one-shot lead into a one-shot loss to Geoff Ogilvy. He will be two days past 50 when he tees it up in the first round there.

He finally won again in Mexico in 2018 at a WGC event and then backed it up with a final-round 65 at Pebble Beach last February for his 44th PGA Tour victory—28 years after his first.

Mickelson has been an important part of conversations in golf since that his tour win in Tucson in 1991—as a college junior. To put into perspective how long ago that tournament was considered this: the runners-up were Tom Purtzer and Bob Tway.

The argument can be made that no player has been more popular in the 29 years since that victory. The only golfer in history who might have signed more autographs than Mickelson is Arnold Palmer—who Mickelson is often compared to for his charm, his talent and his tendency to occasionally meltdown with his go-for-broke style. The best example of that has to be the 18th-hole disaster at Winged Foot. “I am such an idiot,” Mickelson said afterwards.

Mickelson has also been involved in more than his share of off-course controversies, including threatening to move out of California to cut down on tax increases to his $50 million annual income in 2013 (he later apologized); an SEC investigation into insider trading (charges were dropped but he had to pay back the almost $1 million he had made on the deal); his blow-up at Tom Watson after the 2014 Ryder Cup; and his refusal to play in the third FedEx Cup event in 2007 because he was upset that the first FedEx Cup winner’s prize would be a $10 million annuity, not $10 million on the spot.

For years, players whispered that Mickelson signed autographs for 45 minutes every day to bolster his public image and his marketing opportunities. My feeling was that the kids who got those autographs really didn’t care why he signed, only that he did. Now, he’s the tour’s respected elder statesman, “Papa Bear,” as Zach Johnson calls him to Ryder Cup teammates and other younger players. 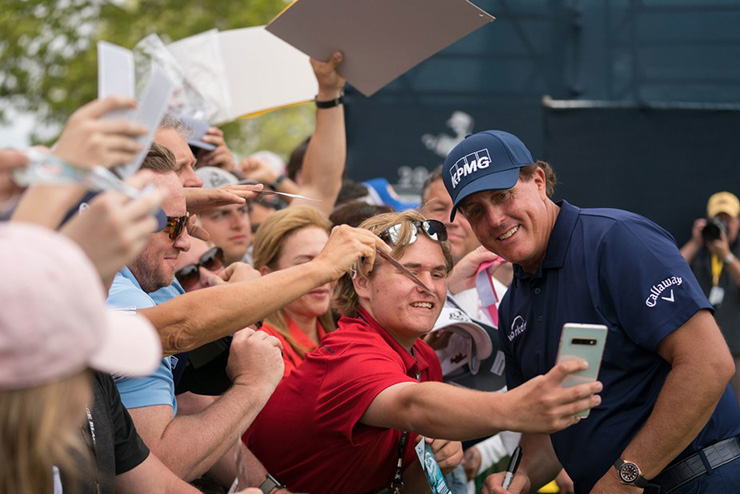 There’s also this: Mickelson and Watson never really resolved their differences after the 2014 Ryder Cup, but when Hilary Watson was diagnosed with pancreatic cancer in October 2017, among those who reached out to the Watsons were Phil and Amy Mickelson—Amy having gone through a serious scare with breast cancer years earlier.

“Amy called and texted me all the time,” Hilary Watson, who died in November, told me in June 2018. “She could not have been warmer or more helpful.”

Tom Watson said similar things about Phil. “He reached out to offer any support he could,” Tom said. “It was clear to me that whatever had been between us in the past didn’t matter. I was very touched.”

Mickelson’s never talked about that publicly. Clearly, it had nothing to do with image or marketing.

He can be both prickly and charming. He can be very funny. When I brought up his tax complaints during an interview he said, “I know you think I’m a right-winger, but I’m actually pretty liberal on most things.”

It’s hard to not like Phil Mickelson. He’s lost weight, become a social media celebrity and comes to the desert looking fit and ready to go. It would also be silly to write him off. Even as birthday number 50 looms.