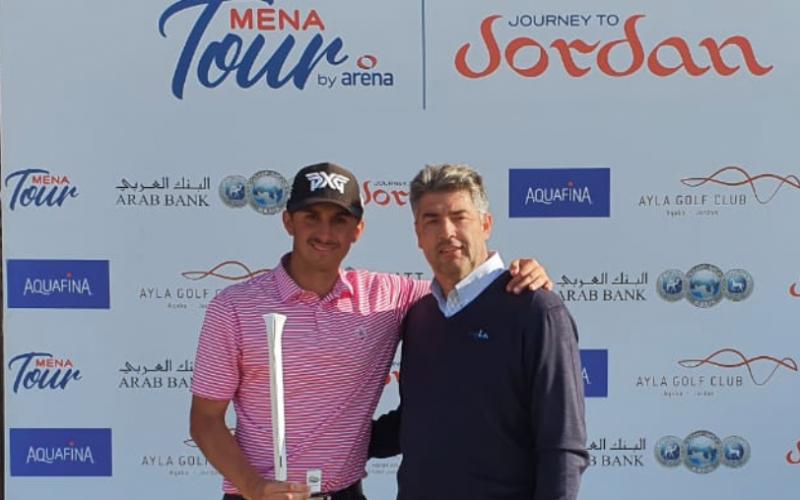 By Kent Gray
It looks like reigning amateur ‘Journey to Jordan’ champion Josh Hill will have some serious competition during this season’s condensed MENA Tour by Arena season.

The 185cm (6ft 1in), 81kg lefty edged Scottish professional Ryan Lumsden and Irish pro Paul McBride with a first playoff hole eagle at Ayla Golf Club after the trio had finished the 54-hole qualifier on -7, 209, a shot ahead of Scotland’s Calum Fyfe.

Lundell’s scores of 70-68-71 won’t have gone unnoticed by Hill, who qualified for last week’s OMEGA Dubai Desert Classic via his Journey to Jordan title last season. After winning the Al Ain Open to become the youngest winner of an Official World Golf Ranking event last October, the Dubai-based England Boys’ representative is clearly focused on winning tournaments this season but the increased amateur competition isn’t a bad subplot.

Lundell clearly has an affinity with desert golf after a stellar senior year for the Grand Canyon University golf team in Phoenix, Arizona last season, highlighted by victory in the UC Irvine Invitational at Santa Ana Country Club (California) in October.

Amateurs continue to excel at Ayla Golf Club.
Sweden’s Filip Lundell has secured the Qualifying School B medalist honors after prevailing in a 3-way play-off at 7-under par.
Lundell made an eagle on the first extra hole to beat Scotland’s Ryan Lumsden and Ireland’s Paul McBride. pic.twitter.com/vF4BhRgxBD

After firing 10 rounds in the 60s, Lundell was named to the All-WAC (Western Athletic Conference) first team and is set to see his current World Amateur Gof Ranking (WAGR) of 656 soar after his Ayla triumph. His sister Sofia also plays collegiate golf for the University of California Golden Bears.

Filip Lundell is the second amateur to win an event at Ayla Golf Club.

And Josh Hill was the leader going into the final round of the Journey to Jordan Tour Championship.@AylaOasis @arenamiddleeast

A total of 35 players from the 52-strong ‘Q-School B’ earned cards for this season’s MENA Tour which will feature 11 tournaments, starting and finishing at Ayla at the Journey to Jordan 1 Championship next week (Feb 3-5) and the $125,000 Arena Championship (April 20-22) respectively.

Other amateurs to qualify were 6th placed Englishman David Haque (-4) and German Julian Ballmann who finished T-32nd on 11 over par.

Congratulations to all those who secured their MENA Tour cards for 2020 from the Qualifying School B stage today.

The Journey to Jordan begins in real earnest when our season-opening J2J#1 is held at Ayla Golf Club from Feb 3-5.@AylaOasis @arenamiddleeast pic.twitter.com/UMycq9KuTS

Among the total of 22 players (in a field of 33) to advance from Q-School A were Chinese amateur Ziang Xu (+6) and English professional Alfie Plant who sprung to prominence by claiming the Silver Medal for amateur honours at the 2017 Open Championship at Royal Birkdale.

There is something about the Ayla Golf Club that Miguel Angel Jimenez Junior absolutely loves.
He got a hole-in-one there last year and he now has a win as well.
No wonder he loves the place…his daughter is named Ayla as well!@Tengolf @arenamiddleeast @GolfDigestME pic.twitter.com/AyWOgpSnGO

Many congratulations to the 22 players who earned their cards for the 2020 MENA Tour by Arena season at the Qualifying School A at @AylaOasis in Jordan.