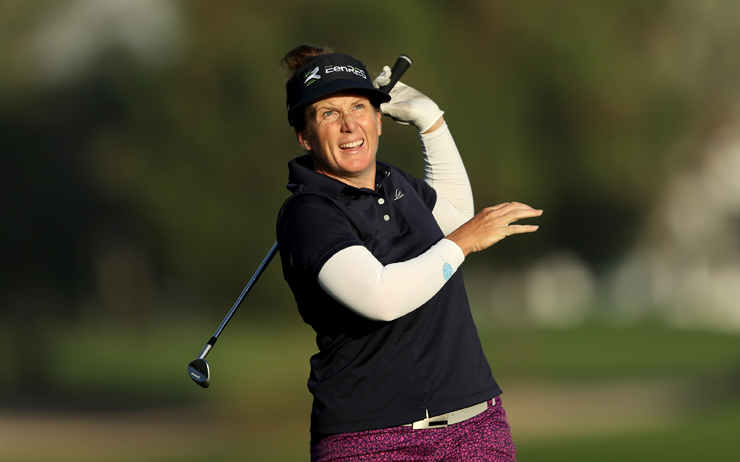 Beth Allen made no attempt to candy coat the hollow feeling that accompanied the end of her career best year.

The 34-year-old Californian had secured the Ladies European Tour order-of-merit title before the season-ending Omega Dubai Ladies Masters but only because Shanshan Feng hadn’t played the requisite six events to qualify.

Allen still hoped to play well enough at Emirates Golf Club to eclipse the Chinese world No.4 but Feng’s fourth Dubai title in five years and a disappointing T55 for Allen put pay to that.

Allen finished 2016 with €313,079 from 16 events and the official money title. But there was nothing unofficial about the disappointment after Feng finished with €14,195 more from just a quarter the number of starts on the LET.

But surely it’s irrelevant as you have the title, surely it doesn’t really matter?

“I had expectations [coming into Dubai] obviously because I had been playing well all year and I had a decent round in the first round. But yesterday [Friday], something just wasn’t right, and then today I thought the conditions were really tough,” Allen said.

“Like, that score that Shanshan shot [64] is phenomenal, and Charley [Hull, 65] as well. I guess Friday was really my downfall and maybe it was just a bit of like I was tired mentally. Maybe that was part of it. I don’t know. But I wish it was different.”

Allen’s year – wins at the Open de France and last month’s inaugural Fatima Bint Mubarak Ladies Open at Saadiyat Beach GC and five other top 10s – is nothing to sniff at.

It’s just that Feng has been, well, fantastic in her fleeting appearances with victory at the Buick Championship in China, a T17 at the Ricoh Women’s British Open, fourth place at The Evian Championship and her stunning two-shot, come from behind triumph in Dubai.

“Of course I wish I would have made more money than her,” said the Edinburgh-based LET board member’s whose buildup to Dubai was hardly ideal although potentially very profitable as she secured an LPGA Tour card for 2017 at last week’s Q-school in Florida.

“At the end of the day, to be a member, you have to play in six events, and I support the LET 100 percent. Because of that, I think I guess I deserve it.

“Looking back, I’m so pleased, because this is something that I wasn’t ever sure I could achieve. Everything just sort of went nicely. So yeah, I’m really, really happy…I [just] wish things were different [at the end].”

So what next for Allen, who was married in July, is committed to the LET next year but needs to play well in the US to achieve her goal of a Solheim Cup start?

“I haven’t been to Edinburgh in two months, so I’m keen to go back. I’m going to be there until Boxing Day and then I’m going to California to see my family, too. I think it’s going to be a great off-season, probably the best ever.

“It’s been a full on few months and I’m really ready for the couch.”