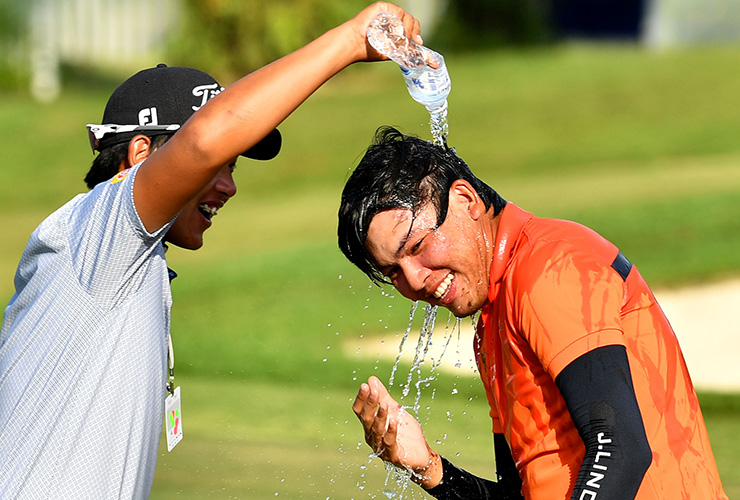 By Kent Gray
Expectation, driven silently from within and overtly so from well-meaning external sources, is the almost inescapable and often uncomfortable bedfellow of golf success achieved at a young age.

So it has proved for Phachara Khongwatmai, the young Thai who shot to global prominence when he won the All Thailand Golf Tour (ATGT)’s Singha Hau Hin Open in 2013 — as a 14-year-old amateur. Khongwatmai turned professional immediately afterwards and his new army of admirers waited for the child prodigy to kick on to inevitable Asian Tour success. And waited. And waited some more.

Finally, after a further six ATGT wins (two of them in the past two months), a pair of Asian Development Tour victories and six runner-up finishes on the main circuit, the 22-year-old celebrated his Asian Tour breakthrough on Sunday, claiming the $1 million Laguna Phuket Championship following a physically and mentally taxing final round.

What happened in the immediate aftermath of Khongwatmai’s win, sealed by a shot from Korean Bio Kim and compatriots Panuphol Pittayarat and Denmit Boriboonsub (the latter aged just 17), was predictably unavoidable. After a clutch 12-foot par save to clinch victory on the 72nd hole was drained, a flood of fresh, externally-generated anticipation flowed.

Up in the commentary booth, analyst Anthony Kang likened Khongwatmai to a young David Duval, the American who had seven runner-up finishes before his PGA Tour breakthrough and eventual ascent to world No.1. Duval went on to claim 13 PGA Tour titles in total, the last of them the 2013 Open Championship at Royal Lytham and St. Annes.

Kang, himself a three-time Asian Tour champion whose biggest triumph came at the 2009 Maybank Malaysian Open co-sanctioned by the then European Tour, reckoned out loud that Khongwatmai also had a “major championship-winning game”.  Lead commentator Timothy Lowe doubled down by likening Diamond, as Khongwatmai is nick-named, to Phil Mickelson. Both the American lefty and the talented Thai, Lowe said, were players capable of magic on and around the greens – Khongwatmai’s putting was a key factor all week – but also a blowout hole every now and then.

Khongwatmai’s game, according to long-serving Asian Tour on-course reporter Dom Boulet, meanwhile, has matured in recent years, rendering those card-wrecking scores to occasional rather than regular occurrences. He needed all that newfound resolve in a four-birdie-four bogey final round of 70, an even-par circuit made difficult by winds gusting up to 30kmh, tight fairways and thick rough and greens baked in the tropical sun.

The US$180,000 Khongwatmai claimed for his winning 10-under total was a career-best payday and propelled him up to second place on the OOM – just $9903 behind Aussie Wade Orsmby – heading into January’s Singapore double-header, the finale of this COVID-disrupted season that started on Jan. 9, 2020, and won’t finish until Jan. 23, 2022.

It surpassed the €140,000 he banked for a runner-up finish at the 2017 ISPS Handa World Super 6 in Perth but it was victory with Thai legend Thongchai Jaidee in another European Tour event, the 2019 GolfSixes Cascais (a non-money ranking teams initiative), that kept outsiders believing in Khongwatmai.

Cue Boule – the “voice of Asian golf” – in Sunday’s winner’s interview. “Now, many of us believe you are a top-20 player in the world, you’ve got that ability. Do you believe it yourself?”

“I believe [in] myself but I don’t think so long [far ahead]. I just think the way I do now and play my best,” retorted Khongwatmai who jumped from 370th to 223rd in the OWGR with his victory, still some way off his career-best ranking of 148th. 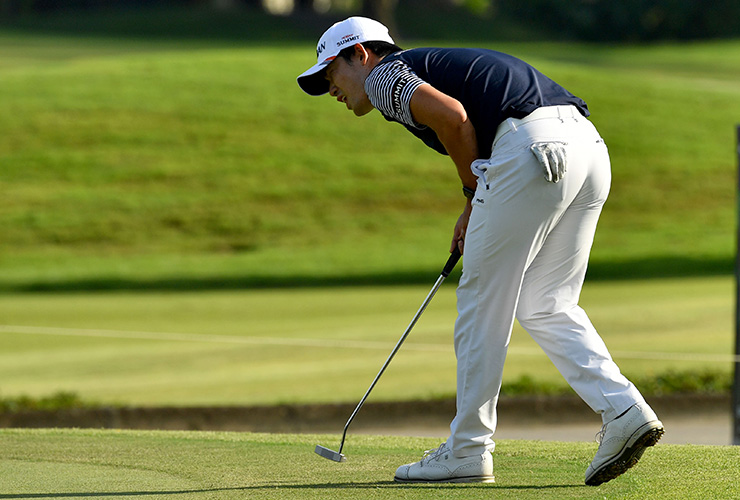 Bio Kim lead after the first three rounds but struggled with his putter all weekend long.

His best was good enough on a Sunday of blustery winds and flagging fortunes for the main contenders.

Kim, who led after each of the first three rounds, started the final day with a one-stroke buffer but bogeyed four of his first five holes before finally losing a weekend-long battle with his putter on the 72nd hole when a birdie attempt that would have forced a playoff burned the cup. The Korean signed for a two-over 72 but had the consolation of T-4 and T-2 finishes in a Phuket fortnight that bolstered his bank balance by $112, 533 and bumped him inside the top-10 of the OOM. A trip to February’s Saudi International, the Asian Tour’s $5 million 2022 season-opener, is now guaranteed with Kim firmly inside the top-30 OOM bubble heading to Singapore. 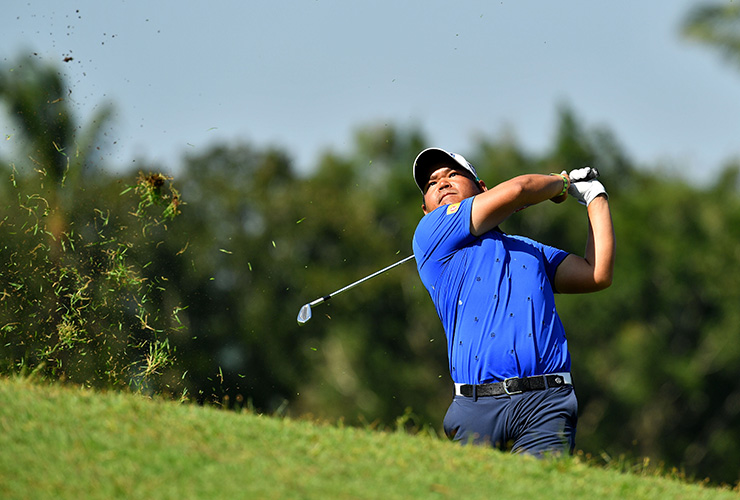 Pittayarat led by three strokes with six to play but bogeyed four of that closing stretch, including the last after starting the 72nd hole tied at -10 with Khongwatmai. Pittayarat’s closing 71 squandered a third Asian Tour win, or at least the shot at that milestone via a playoff.

About the only one not going backwards at the end was Boriboonsub who, fresh from winning the ATGT’s Singha Chiang Mai Open late last month with a stunning closing 64, brilliantly birdied the penultimate hole before watching as a birdie attempt on the last to force a playoff slid agonisingly by. His 68 was bettered by only two others in the top-10 and, save for Khongwatmai’s fairytale, challenged 14-year-old amateur Ratchanon Chantananuwat for the feel-good story of the week. After his -11 weekend at last week’s Blue Canyon Phuket Championship, Chantananuwat sensationally made it back-to-back cuts at Laguna Golf Phuket and finished the Asian Tour Phuket Series with scores of 69-69 in testing conditions. 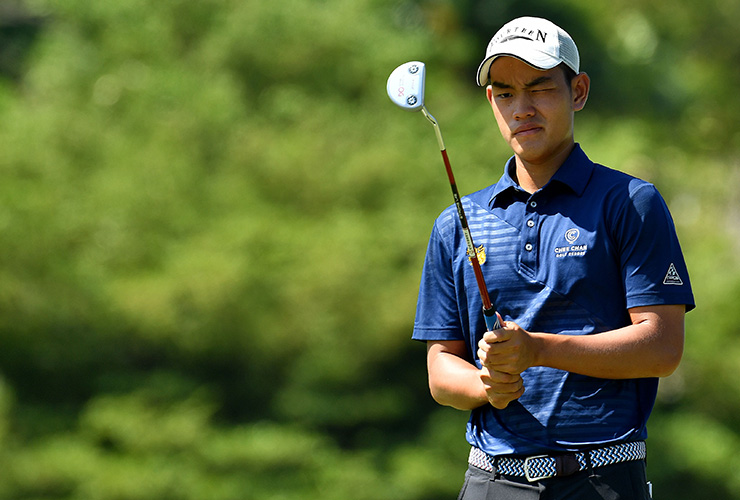 Denmit Boriboonsub’s 68 was bettered by only two other players in the top-10.

Khongwatmai gained the lead on the 15th when Pittayarat bogeyed via a three-putt but returned the favour on the penultimate hole with three stabs of his own from long range. For a player who has struggled to get over the line so many times, it was almost fitting the finale was so nervy. It was certainly never going to be easy as Khongwatmai gave himself every chance of another three-putt on the last by rushing his birdie putt by the hole, only to coolly drop the 12-footer coming back before being dowsed in water by his mates.

“I feel very happy, and very excited for this win. I have been waiting for about six years. Right now, it is my time, and I feel great,” he said.

“Today was quite difficult because it was tough wind. I have never played this wind in Thailand before. Today was tough, and all about who can make the score and keep the score.”

As it turned out, a period in quarantine at Laguna Phuket Resort helped calm Diamond’s nerves on the last.

“That last putt is my last chance for 18 holes [in regulation] but if I missed I knew I had another chance in a play-off. [And] I had that putt from that place before when I was here in quarantine.”

Eight topsy-turvy years on from Hau Hin, it turns out holing a putt for the biggest win of his life wasn’t an unreasonable expectation after all. 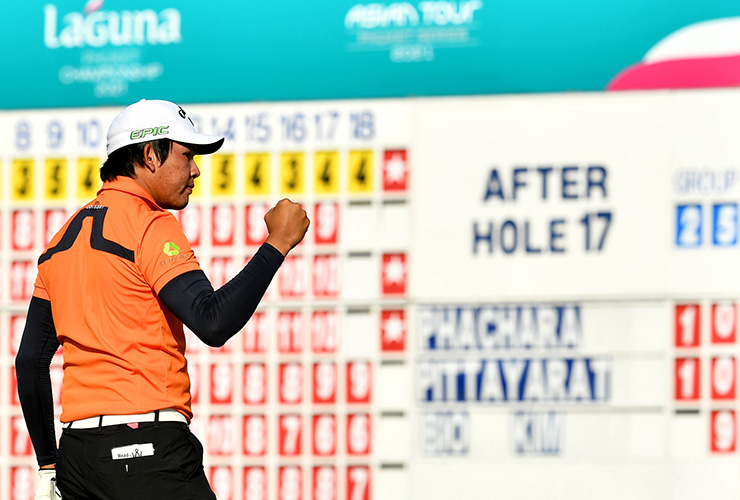