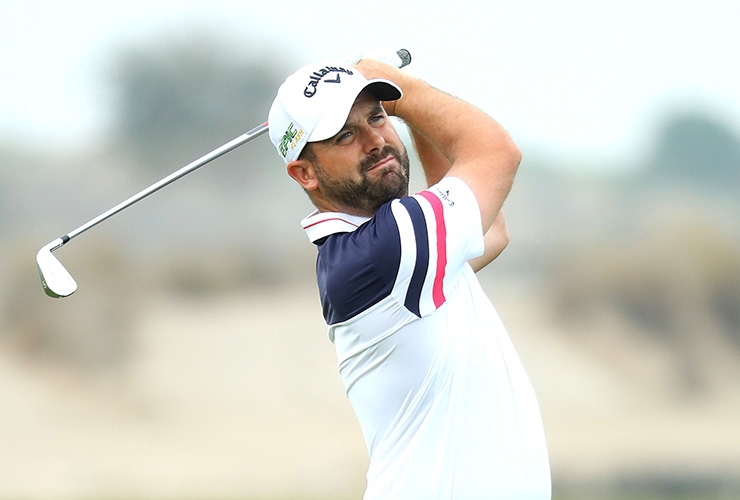 Warren Little/Getty Images
Baldwin plays his second shot into the 9th green during the first round of the Oman Open at Al Mouj Golf on February 28.

By Kent Gray
Matthew Baldwin’s week away from the MENA Tour couldn’t have gone much better.

After a 70 to share 15th place following the opening round, the former European Tour regular would have eyed a higher finish in Muscat but wasn’t grumbling with rounds of 75-71-77 given the blustery conditions. He eventually finished on +5, 12 shots behind impressive American winner Kurt Kitayama.

Perhaps best of all, Baldwin has maintained pole-position in the race within the MENA Tour’s season-long Order of Merit (OOM) race to keep alive hopes of another European Tour start at the end of the month. But only just; the $18,000 he’s won from two starts to top the moneylist is a narrow $275 advantage over Australian Daniel Gaunt.

The leader of the MENA Tour OOM after the five-event ‘spring swing’ concludes in Bahrain next week will earn an invite to the $3 million Maybank Championship (March 21-24). That is all the motivation Baldwin needs on the eve of the $75,000 Troon Series – Dubai Open presented by Turkish Airlines at Dubai Hills Golf Club

With $13,500, three precious Official World Golf Ranking points and an invite to the Challenge Tour’s Slovakia Challenge (July 4-7) also up for grabs to the champion at this week’s 54-holer at Dubai Hills, Baldwin and co have much to play for.

Gaunt, who finished solo fifth at Ghala after his emotional win in Ajman a fortnight ago, brings impressive form to the region’s newest course while Baldwin’s countryman Nick Marsh ($14,006) has also thrown his name into the Kuala Lumpur equation by winning last week’s Ghala Golf Club Open.

It’s not just the Malaysia Open invite that will have the leaders on tenterhooks; the top five players at the end of the spring swing will be rewarded with the second placed player headed to the Trophee Hassan II in Morocco (April 25-29), third to the new Jordan Mixed Open at Ayla G.C. (April 4-6) while Asian Tour invites to the Indonesian Masters (July 4-7) and Indonesian Open (Aug. 15-18) await the fourth and fifth-placed players respectively.

As well as the inevitable OOM snakes and ladders this week, there will be much interest in the performance of U.S.-bound Dubai amateur Rayhan Thomas who will make his second start of the season after a T-9 finish at the Troon Series-Al Zorah Open.

The 19-year-old, headed to Rickie Fowler’s old Oklahoma State University later in the year, described his golf in Ajman as “mediocre” despite the top-10.

“I am happy to be the leading amateur, but I obviously wanted to win the tournament. I know I could have contended for the title this week. It would have been nice to start the season with a win in your third tournament of the year,” Thomas said.

Thomas will undoubtedly serve as a marker for Englishman Curtis Knipes who leads the Amateur Order of Merit with 4442 points – 1667 points clear of Dubai-based 14-year-old Josh Hill.

Just like for Baldwin, the MENA Tour is also working for the Knipes and Hill given the World Amateur Golf Ranking points on offer.

Following the Troon Series – Al Zorah Open, Curtis Knipes and Josh Hill have achieved their highest-ever ranking on the @WAGR

And we are sure this is just the start of a long journey for these two talented amateurs.
#HarderBetterFasterStronger#JourneyToJordan pic.twitter.com/ertTETC7Y6

A total of 11 amateurs will tee it up in the Dubai Open which begins Tuesday with a 120-strong field.