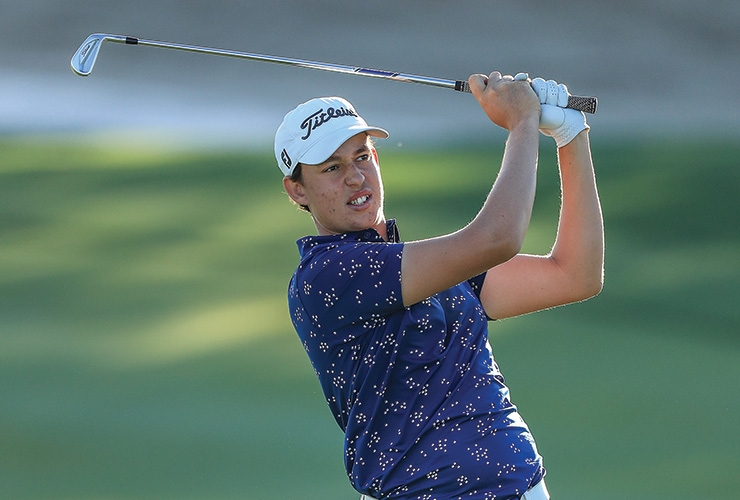 David Cannon/Getty Images
Josh Hill plays his approach to the 17th green during the first round of the Abu Dhabi HSBC Championship on January 16, 2020.

By Kent Gray
Josh Hill opened his maiden European Tour round with a birdie and finished it in similarly spectacular style. All he’s got to do now is sort out the rough stuff in between.

The 15-year-old Dubai amateur eventually signed for a two-over 74 in his Abu Dhabi HSBC Championship debut, meaning he’ll start Friday’s second round tied 97th and with much work to do to make the weekend.

But that’s exactly what the MENA Tour star intends on doing, especially if he can get his wayward driver to cooperate. After the impressive start, Hill was punished for missing three fairways, mixing a total of five birdies with as many bogeys and a double on the 9th.

“Two sixes, on 8 and 9, killed the momentum, and then I started hitting my driver bad on the back nine, which didn’t help,” Hill said afterwards.

“Three bad bogeys, but other than that I was hitting it alright. Just three mistakes and three bad drives.

“I’m a bit disappointed, but it was really good out there. I was a bit nervous walking on greens, if I’m going to stand in front of a line or make a spike mark. But once I got into the round I started to feel more comfortable. Not too happy with the end result, but two-over, and a good round tomorrow hopefully.”

How about that 1st hole, the dream start after rolling in a 15-footer?

“On that first tee, I was shaking a bit over the ball and I was just, in my head, [saying] just take it back and it’ll be fine. Took it back and just ripped it, then holed a good putt. So it was very nerve settling.”

Once he got going the youngster even felt like he belonged.

“Probably the support coming down the last [was the highlight], everybody shouting my name. That was quite nice.”

Hill’s driver can expect a stern talking to overnight before his 8.10am (10th) tee time in the company of Charl Schwartzel and Austrian Matthias Schwab. For the record, Hill matched Schwab’s 74 and is only two shots adrift of former Masters champion Schwartzel. As it stands, the top 60 players and ties are at -1 but the cut mark is likely to be lower.

“I’ve just got to make sure I’m in play off the tee. I lost about four or five shots off the tee today. If I’d just hit it somewhere on the grass, I could’ve probably easily shot two or three under. Considering I was hitting my driver bad, two-over’s not too bad. “Yeah up early but I don’t mind that. Fresh greens and hopefully a better score.”