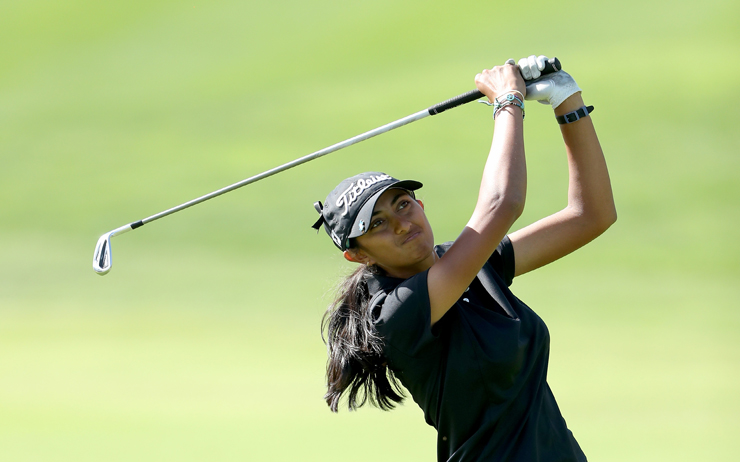 While her more seasoned peers look forward to a festive season break on the sofa, Aditi Askok can’t wait to get home to India…and back out on the range.

“I’m actually getting a new driver and 3-wood from [Titleist], the new 917, so I’m looking forward to practice with those,” the Ladies European Tour’s newly crowned rookie-of-the-year said of her well-deserved off-season.

Is that your idea of a Christmas gift? “Kind of, yeah.”

That that sort of attitude and aptitude to getting better, it’s little wonder the 18-year-old from Bangalore is one of the hottest properties in world golf currently.

Ashok capped her breakthrough year, which included back-to-back wins in Indian and Qatar, with a share of third place alongside Englishwoman Florentyna Parker at the season-ending Omega Dubai Ladies Masters.

Three successive rounds of 70 saw her finish -6, four adrift of Chinese champion Shanshan Feng and lifted her to second overall on the LET money list with €206,664 from 13 starts, €106,405 behind Californian Beth Allen.

Like Allen, Ashok didn’t have time for a practice round on the Majlis after flying into Dubai after gaining partial LPGA Tour status at last week’s Q-School in Florida.

“That made it difficult but I think I did exceed expectations. I made four birdies every day but a made a couple of mistakes every day, too. To finish off your year with a top five is good. It’s not bad.”

So what will you be working on at the range, other than coming to grips with those flash new woods?

“I think I could still get a lot sharper with my approaches compared to how I am now. And plus the US courses are going to be slightly longer, so I’m going to have to get really good with my approaches, and also work on hitting it further. That’s a continuous process.”

So too is coming to terms with her sudden celebrity which has come as something of a surprise.

“I think the Olympics changed that quite a bit. Even before [Rio], I was playing in LET events and I did sort of okay, but it wasn’t like it was of interest at the time.

“But obviously after I played the Olympics, everyone wants to know what I’m doing because I’m the ‘Olympian who was leading after two days and is now playing here’. Hopefully the interest continues to grow and not just with me but with all the women golfers in India.”

And what of next year. You’ve already set your crosshairs on the LPGA rookie title we hear?

“Yeah, that would be challenging but I’m sure on the LPGA, I’ve heard that if you play well, they have reshuffles and so you might get into a good position. You might be able to get into all events if you just do well in the opportunities you get,” Ashok said.

“So hopefully I can do that. And also the LET, I should be able to play a couple of events like The Scottish Open and stuff like that, which I may not get into from the LPGA but I can get into from the LET side, and maybe three majors, I’m not sure yet.”
What does seem certain is that we’re going to hear a lot more from India’s most talented golfing teen.