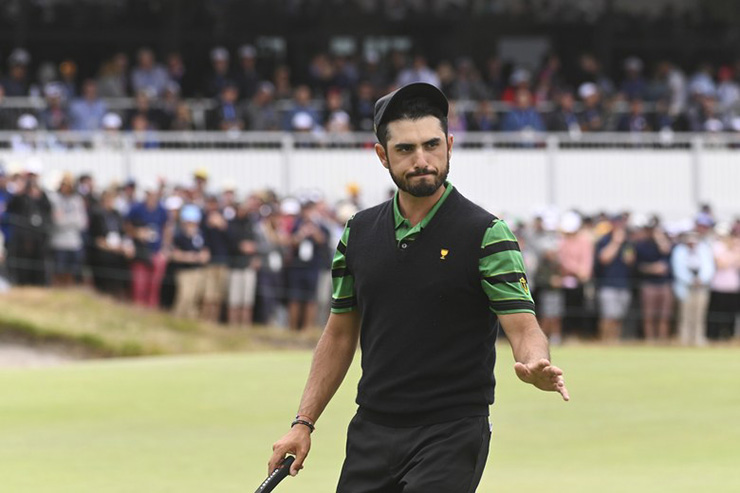 VICTORIA , AUSTRALIA – DECEMBER 15: International Teams Abraham Ancer of Mexico during the final round singles matches at the Presidents Cup at The Royal Melbourne Golf Club on December 15, 2019, in Victoria, Australia. (Photo by Keyur Khamar/PGA TOUR via Getty Images)

By Dave Shedloski
Fresh off a solid performance in his first Presidents Cup, Abraham Ancer is ready to take the next step in his professional career. A very big, exciting step.

Win a tournament? Yes. Of course. But that’s not a surprise.

Play in the Masters? OK, sure. Undoubtedly, he is eager to compete at Augusta National Golf Club, and having recently received his invitation in the mail, he is even more stoked.

Share a toast with the world? Ah, now we’re onto something. More on this momentarily.

Mexico’s best player is coming off a career year that culminated in a berth in the Tour Championship and then in December winning a team-high 3½ points for the International team in his Presidents Cup debut at Royal Melbourne Golf Club in Australia. Ancer’s only loss came in singles when he squared off against U.S. playing captain Tiger Woods and got locked in a back-and-forth tussle before the Masters champion dispatched him, 3 and 2.

That was a learning experience in more ways than one.

Ancer, 28, found a way to raise his game while playing under pressure he hadn’t yet experienced, something he hopes will make him a better player, something that is a bigger benefit than simply working on his golf swing.

“Every single shot you feel like, ‘I have to make this, I have to pull this off,’ because you’re playing for your team,” Ancer said of the Presidents Cup. “Every point counts, every half-point. I feel like I get a lot out of that. I become a better player when I put myself in those situations, and moving forward I feel like I will be a little calmer in situations where I would be normally very stressed out.”

Ancer also found out that what he says and what he means aren’t the same thing. “I learned a lot about media and how it can get twisted,” he said, grinning.

Ranked 38th in the world, Ancer was asked in mid-November at the Mayakoba Golf Classic in Mexico a question that was more loaded than it first appeared.

“It was like, ‘Out of the 12 guys, who would I like to play on a big stage in a big event like that?’ Yeah, obviously, I would like to play my hero growing up, Tiger Woods. Be an incredible experience,” Ancer explained. “Yeah, maybe it was a little bit of a downer because people just didn’t know how I said it. I was just a little thrown off by some of the comments.”

Coming off top-10 finishes at the WGC-HSBC Champions and Mayakoba, Ancer has an ambitious year ahead of him. And that’s not just on the course. Off it, he and a business partner, Aron Marquez, are launching a brand of tequila, Fletcha Azul, which he is displaying across the front of his cap.

“We’re both Mexican. Both love tequila. We just said, ‘You know what? Let’s give it a whirl.’ It’s been in the works for over a year, and we’re really excited,” said Ancer, who met Marquez a few years ago in the pro-am at the Charles Schwab Challenge in Fort Worth, Texas. We’ve been nonstop working on it, so really happy with all the profiles of our tequila and everything. We pretty much are excited just to already showcase it and have people try it.

Some guys want to grow the game. Ancer certainly does. But he also wants to grow the appeal of tequila. Apparently, tequila gets bad press, too.

“It’s just remove the stigma of people like have tequila when they’re in college and they’re already kind of drunk, and then they have tequila shots that are pretty bad, and then you mix it and end up throwing up,” Ancer said, noting that his brand, which will roll out next month in his native Texas, is much smoother. “You wake up with the worst hangover. What you remember is like, ‘Wow that tequila got me.’ Yeah, we’re trying to get the culture to really understand how tequila works and how good it can be. … I mean, for my size, I can throw down some tequila and the next day, seven in the morning, I’m hitting balls and I’m completely fine, which is amazing.”

Ancer had reason to raise a toast after the Presidents Cup when he got home and looked in his mailbox. He’d seen a few of his fellow professionals post photos on social media of something highly coveted—their invitations to the Masters.

“I didn’t know it was coming,” he said. “I saw some posts of other people like putting on Instagram or Twitter. I was like, ‘Well, I need to check my mail then.’ When it was there I was like, ‘Wow, this is pretty sweet.’ I had to put it in my office right on my desk, and I’m probably going to frame it.”

Yes, he admitted, he celebrated with a little tequila.