Abraham Ancer keeps coming up big for the Internationals 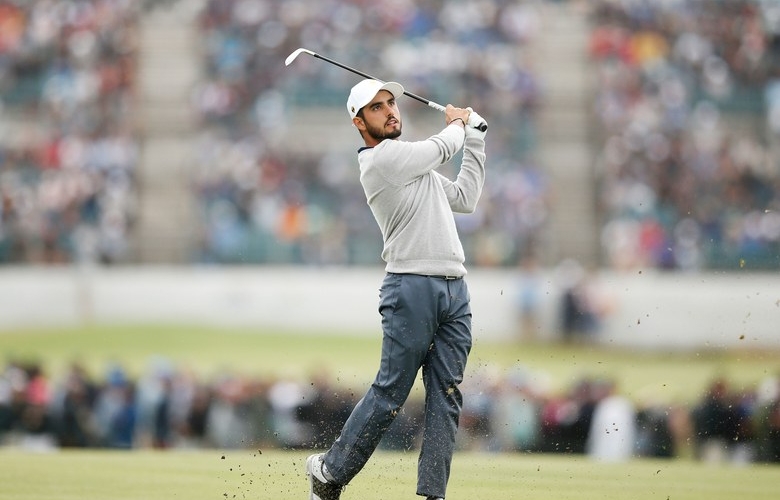 Darrian Traynor/Getty Images
Abraham Ancer plays his second shot on the 17th hole during Saturday afternoon foursomes matches on at the 2019 Presidents Cup.

By John Huggan
MELBOURNE — Within an International team that for two-and-a-half days performed far above the expectations of, well, everyone, really, the play of Presidents Cup rookie Abraham Ancer has been especially outstanding. Going into the final-day singles, the 28-year-old Texas-born Mexican owns a 3-0-1 record and the biggest points haul on the home side. Only against the powerful and unbeaten tandem of Justin Thomas and Rickie Fowler—more on that later—has the first Mexican to play in a Presidents Cup been forced to accept anything other than victory.

Upon further review, Ancer’s 87.5 percent success rate is perhaps not the surprise a cursory first glance might suggest. Yes, the World No. 39 is ranked well below all 12 members of the United States team. But Ancer and Australia have a history. Crowned Australian Open champion a year ago, the University of Oklahoma general-studies grad has successfully re-created the potent mix of positive attitude and assured stroke-making that carried him to a five-stroke victory at The Lakes in Sydney.

“Winning down here last year gave me a lot of confidence and general good vibes,” Ancer said. “I had a really good two weeks in Sydney and Melbourne [where he represented Mexico in the World Cup] last year. Been doing the same this year. I just feel comfortable around here. The people are great. And the course is unbelievable. It’s just a really fun type of golf.”

That combination of contentment and relaxation allowed Ancer to produce some of the most memorable shots in these mildly astonishing matches. Teamed with Louis Oosthuizen in the opening four-ball session on Thursday, Ancer made two birdies in three holes to finish off Dustin Johnson and Gary Woodland on the 15th green. And two days later he was up to something similar—only better. Three successive birdies from the 14th carried him and Sungjae Im to a 3-and-2 victory over Xander Schauffele and Patrick Cantlay. The clinching putt from more than 26 feet provoked one of the biggest roars of the week. Im was suitably impressed.

“My partner made some ridiculous clutch putts, even before that one on the 16th,” the South Korean said. “The one on the third hole was especially good; it had a huge curve on it.”

“Adrenaline to the max right there,” agreed a clearly pumped Ancer in the immediate aftermath of his game-clinching effort. “Those are the moments we’ve been practising for our whole lives. To be able to pull it off and finish a match like that is a lot of fun. I’ve been lucky to have outstanding partners [Marc Leishman the third], too. They have contributed so much. They have all made me feel very comfortable.”

Indeed, going into his fourth match in International colours, Ancer was making all the right noises before teaming with Leishman against Fowler and Thomas.

“If we stick to our plan and just play golf at an elite level, we can definitely beat anybody,” he said. “We are clicking right now as a team. We just have to stay focused and keep doing what we’re doing.”

That they were achieving neither was obvious early. Five down standing on the eight tee, the International combo had already meekly lost four holes to par figures (with the Australian more often than not the culprit).

Some semblance of what would surely be minimal resistance was evident thereafter; successive International birdies on the 11th and 12th cutting the previously yawning deficit to a more respectable 3 down.

Hang on, though. In the ever-volatile environment that is foursomes, just about anything is possible when momentum, match play’s oxygen, decides to pivot.

Ancer retained enough inspiration to make an outrageous 25-footer on the 15th green for a half that kept the match alive. And when Leishman repeated that feat one hole later, as the Americans three-putted, things were getting interesting. Make that really interesting, as a par from the Internationals was enough to claim the penultimate hole. Suddenly, what had seemed the unlikeliest of comebacks was possible.

And so it came to pass. Thomas’ drive up the par-4 18th plunged into the undergrowth well left of the fairway Ancer had just found with a near-perfect tee shot. It was for the Americans, a final and fatal error. A par was good enough for Leishman and Ancer to steal the unlikeliest of half-points. Even bequeathing a five-hole start to a pair of world-class players wasn’t, in the end, too much of a short-fall.

“We just kept believing,” Ancer said. “We were never going to give up even when we were 5 down. The emotions right now are amazing.”