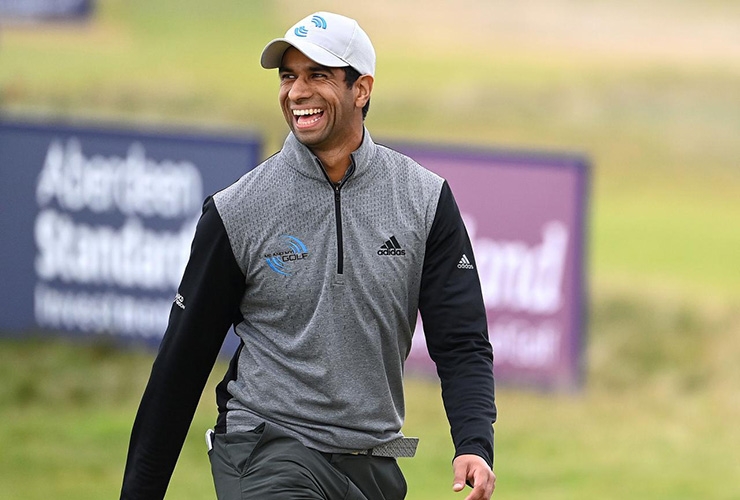 Aaron Rai smiles as he leaves the 18th green during the final round of the 2020 Aberdeen Standard Investments Scottish Open. Ross Kinnaird

By John Huggan
Given what had gone before, the ultimate (anti) climax of this Scottish Open was perhaps inevitable. Yes, Tommy Fleetwood made a 15-footer for birdie on the Renaissance Club’s 18th green to force a playoff with fellow Englishman Aaron Rai. But over the previous 17 holes, the 29-year-old World No. 17 missed any number of makable putts that could, should and would have seen him stroll to a comfortable victory in this $7 million Rolex Series event.

But that didn’t happen. The two protagonists tied on 11-under 273 at the picturesque Tom Doak design on the southern shore of the Firth of Forth, one shot ahead of a third Englishman, Robert Rock (who made bogey on the 72nd hole). And it took only one more hole to decide the destination of the €974,000 first-place check. After watching Rai make a chip-and-putt par after hitting his drive in a fairway bunker, Fleetwood took three putts from the fringe, missing from not much more than three feet to hand victory to his younger compatriot.

“I just fell short really,” was Fleetwood’s inevitably glum verdict. “I felt like I played really well today, especially on that back nine. But my putting really cost me this week. That last one summed it up really. It was just a straight pull. You always try to look at the positives but I cocked it up on the first playoff hole. And that’s that. I’ll sulk for about five hours on the way home. Maybe the only positive is that no one beat me over 72 holes. Clearly my game is coming back. For a lot of this week I felt more like the player I should be.”

Rai isn’t doing so badly himself. One week after a second-place finish at the Irish Open, the man who wears two gloves to hit every full shot is now a two-time winner on the European Tour, having first tasted victory at the 2018 Hong Kong Open. This latest step up, though, is the biggest yet for the 25-year-old who turned pro in 2012. A winner in Scotland on the third-division EuroPro Tour in 2015 (he took home a golf trolley and a range finder), Rai won three times on the Challenge Tour in 2017. Now he sits sixth on the European Tour’s Race to Dubai points list for 2020 and is a member of the world’s top-100 players. Heady stuff.

A soft-spoken, almost shy individual, Rai seemed nearly overcome by the magnitude of his latest achievement. It certainly didn’t come easy. After a bogey on the second hole of his final round, he made the eight birdies he needed to tie Fleetwood, shooting a closing 64 after starting the day tied for 10th, five strokes back of overnight leader Rock. And, just as Rai had done on the final hole of regulation play, he drove into sand in the playoff. With his opponent in the middle of the fairway, Rai’s prospects were clearly veering into a territory known as “bleak.” But just as he had done earlier, Rai saved par.

“Both times I was fortunate to be far enough back from the lip that I could almost make the green,” he said. “And it definitely helped me the second time round that I knew what to expect from the shot. I was still thinking 4 would be a great score though. And I was lucky, too, that the flag was so close to the front of the green. If it had been a back pin, I probably wouldn’t have made par both times. But you always need a little bit of good fortune. That was mine. And of course I wasn’t expecting Tommy to make 5.” Perhaps the only note of discord as Rai has plotted his way through professional golf has been his pace of play. Or, more specifically, his lack of pace. Back in early 2018, former Open champion Paul Lawrie “named and shamed” Rai as one of the worst slow coaches on the European Tour. And, judging by the methodical nature of his pre-shot routine this week, not much has changed in the interim.

Still, at least one major champion won’t be surprised by Rai’s success. Speaking prior to the tournament, 2005 U.S. Open winner Michael Campbell expressed his admiration for Rai’s game.

“Aaron is very good,” Campbell said. “I played with him in Wales, and he showed me all the shots. He works the ball both ways and can hit it high and low too. He’s got all the tools. What he does is hard to do with the modern equipment, but he does it very well.”

Indeed. And this week, no one did it better.