A Transatlantic Twitter war, a heartfelt plea to Anthony Kim, and a Gretzky wedding (just not the one you’re thinking) 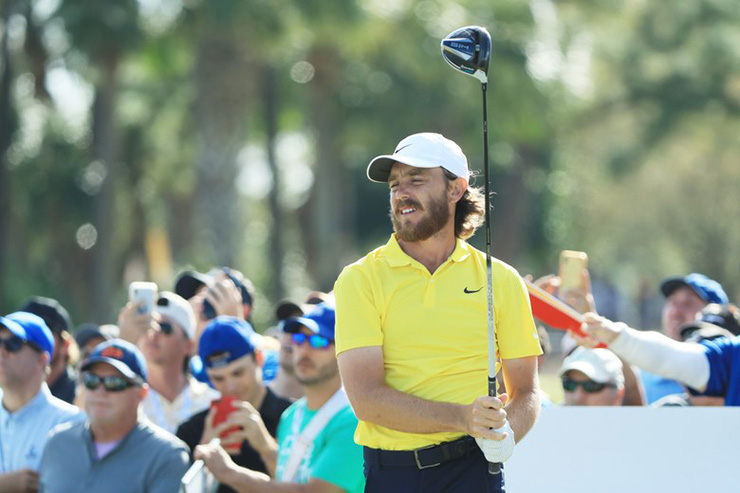 By Alex Myers
Welcome to another edition of The Grind where we were a (small) part of some big sports news last week. Vanity Fair’s shoot with Maria Sharapova, who was announcing her retirement from tennis, took place in the very spot where I do my silly weekly videos! Well, sort of. They used the room to do her hair and makeup. But that’s still quite the brush with celebrity, huh? Get it? OK, so it’s bad jokes like that which keep me so low on the totem pole in my own building. In any event, we eventually got to use the room, and in the meantime, there was also a lot happening in the world of golf.

Sungjae Im: Tales of this young man’s ball-striking were not exaggerated. He is the real deal. And he won’t turn 22 until the end of the month. Congrats to Im on picking up his first PGA Tour title at the Honda Classic. And the Presidents Cupper did it in rather impressive fashion by firing at the flagstick on both of the vaunted Bear Trap’s par 3s. Those shots that set up two clutch birdies were so impressive that runner-up Mackenzie Hughes paid his playing partner the ultimate sign of respect:

Transatlantic Twitter war: With so many awful things going on in the world, it’s great having Golf Twitter getting up and arms about something an announcer said. Here’s the clip that nearly reignited the Revolutionary War:

Is paul Azinger a complete moron??? 'THAT' tour…. and a wobble of the head at @WestwoodLee s amazing wins on the #europeantour .
Who the hell is Mark Wilson also.??? pic.twitter.com/l2G1niQ5bX

From Fleetwood’s own mouth. His words, not ours. Not trying to devalue winning tournaments around the world. Winning anywhere is extremely hard. But these guys know that winning in the US is a step in their careers. That’s all. Not sure what all the fuss is about. pic.twitter.com/2lNhflNNIT

And as rough as it was seeing Fleetwood find the water on the 72nd hole and blow a chance at the maiden PGA Tour title, European Golf Twitter would have been insufferable. Although I do love seeing British slang like “bollocks,” “wanker,” and “shiite.” I need to start incorporating those words more.

Lee Westwood: For one thing, it’s always nice to see a late-career revival. For another, I loved Westwood’s “Ask your parents” response when he gets asked about what it was like in the 90s. And finally, yes, I had a little money on the man, both to win (sigh) and finish top 10 (cha-ching). Our Christopher Powers dubbed Lee’s 2019 Open Championship run “Westy’s Last Stand,” but he’s still got plenty in the tank.

Rickie Fowler’s schedule: The PGA Tour star said he spends 25 to 30 days per year with sponsors, including shooting commercials. I’m totally buying it because his face is everywhere during a golf broadcast and he looks like a NASCAR driver with all those sponsors on his shirt. He’s also over 30, married, and out of the top 25 in the Official World Golf Ranking. Hey, you’ve got to pay the bills somehow.

Tiger’s new schedule: Tiger Woods skipping the Arnold Palmer Invitational isn’t reason for his fans to panic, but the latest indication that the rest of his career will consist of a very limited schedule is still sad. In an effort to avoid back-to-back starts, Tiger is opting not to play at a place where he’s won eight times and possibly the spot that gives him the best chance for a record-breaking 83rd PGA Tour title. But Woods is far more concerned about increasing his major total, and considering he also skipped this event last year, maybe this isn’t the worst news. . . 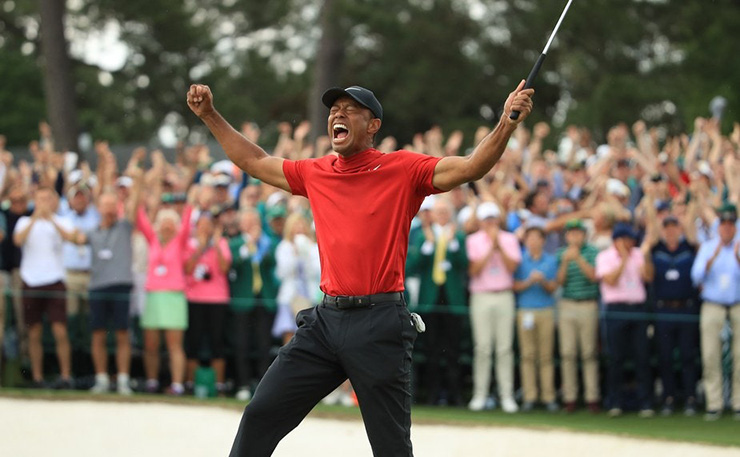 Brooks Koepka’s responses: I love Blunt Brooks or Candid Koepka as much as the next guy, but in the span of a few days he claimed he once made a hole-in-one at Augusta National and forgot about it later that day, said $200 million wouldn’t change his life, and insisted he played well two days in a row despite not coming close to making the cut at the Honda Classic. As the guy ventures further and further into too-cool-for-school territory, we’re starting to take some of his remarks with a huge grain of salt.

Being quarantined: Edoardo Molinari and Lorenzo Gagli were initially pulled from the Oman Open and placed in solitary confinement by the European Tour out of fear they had the Coronavirus. Fortunately, they didn’t, but it didn’t sound like a fun experience:

For everyone asking, I am absolutely fine. No symptoms at all, no fever, no cold, nothing wrong at all…just very bored and annoyed. Hopefully this nightmare will be over soon!

Both players were eventually reinstated and Gagli even finished T-10. But yeah, that couldn’t have been a great feeling.

The PGA Tour continues its Florida Swing with the Arnold Palmer Invitational, AKA that place where Tiger Woods used to win every year, but now skips every year. It was more fun when he was winning every year.

🇮🇹 @F_Molinari's clutch birdie on the 72nd hole @APinv is even more exciting when called by @GOLFTV's Italian broadcasters. 🔊 pic.twitter.com/uFE5INGzNq

This guy just keeps on going: 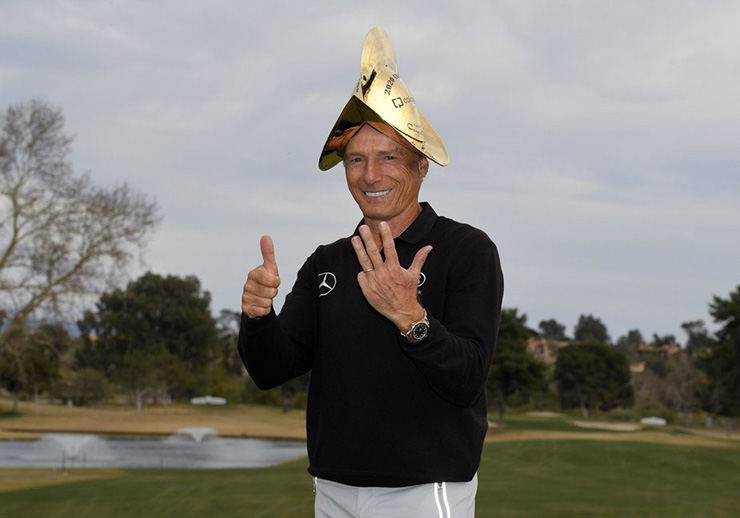 That’s a remarkable 41st career PGA Tour Champions title for Bernhard Langer (hence, the pose), bringing him within four of Hale Irwin’s record. That also pushed the 62-year-old past $29 million in earnings on the senior circuit. He made $10 million on the PGA Tour. Remarkable.

Our man Sam Harrop is back with another fantastic song parody. This time, it’s a plea for Anthony Kim to come back:

Not quite sure how one is supposed to follow-up something like that Tony Finau video, but, well…here's where I ended up.

And, if all else fails, I'm pretty sure I speak on behalf of the entire golf community when I say, AK – we want you back.

RTs appreciated, as ever 😊 pic.twitter.com/Q7VS1PmHtk

Other than pronouncing my hometown wrong, getting the year I won The Honda incorrect & getting my name wrong, the announcer nailed it!!! 🤣🤣🤣 . 2 back heading into Sunday & in a great position. Thanks for all the support out there, loving it #Honda #HighWhycombe #2006champ #CallmeRonald #0for3 🍟🍔

LOL Luke McDonald?! The guy is a former World No. 1 for crying out loud! Where’s the respect?!

“I’m not even sure that he’s polarizing. I’m not sure there’s too many people on the other side, you know what I mean? I mean, ‘there is no God’ was the first thing I said after he’d won last week. There is no God, you know, that’s proof of it right there. Amazing. I mean, he is amazing. He’s Captain Oblivious, just can let everything run off his back. I’ve never seen anything like it.” —David Feherty on Patrick Reed. My word! Tell us what you really think, David!

Turns out, Mike Trout can smoke a golf ball even harder than he hits a baseball:

Decent athlete, that one.

FOLKS, we have a GRETZKY wedding alert!

Sorry, hope you didn’t get too excited. It was Ty getting hitched, not Paulina. But Paulina and DJ were there looking fancy. And The Great One was there making heartfelt toasts. And one of these days we’ll finally get the golf royal wedding we’ve been waiting for since 2013. Right? Maybe? Fingers crossed, because there’s going to be a lot of CONTENT when it does happen.

Stopped in Austin to work a bit with Pelz before playing these next two weeks. Had some fun too. 😉 #SingleTake

Speaking of content, please attempt that in the real tournament next year. Please.

Sami Valimaki, 21, won his first European Tour title just 18 months removed from finishing up his required military service for Finland. Guessing the food in player dining is just a bit better than at his previous gig. . . . Dustin Johnson said he will not play in the Tokyo Olympics later this year, even if he qualifies for the U.S. team. Is this a hint of a July wedding? . . . Tiger Woods has been officially announced as a finalist for the World Golf Hall of Fame 2021 class. Fingers crossed he has the votes to get in. . . . And finally, I’m in the midst of a dental emergency stemming from a root canal I underwent two years ago. I will spare you a photo, but suffice it to say, THE GRIND has extra meaning behind it this week.

Who will deliver Tiger’s Hall-of-Fame introduction speech?
How many days a year did Maria Sharapova spend with sponsors?
How many days this year am I going to have to spend at the dentist?