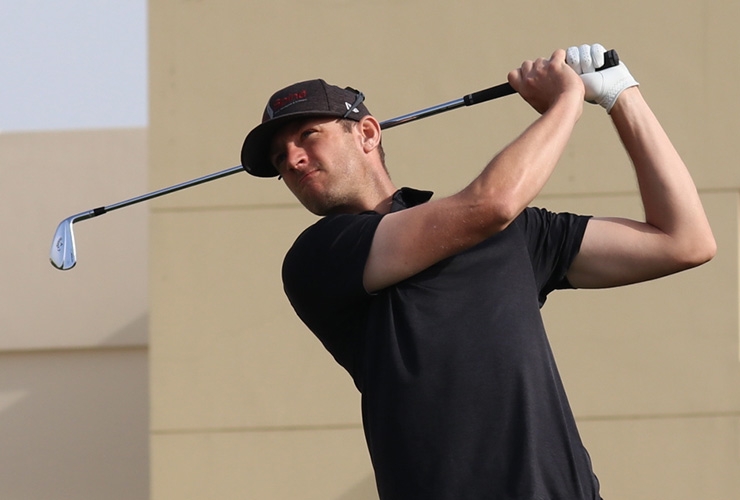 Photo by Joy Chakravarty/MENA Tour by Arena
Max Kramer in action at the Royal Golf Club Bahrain on Monday.

Kramer perhaps edges the story behind the top of the leaderboard story stakes after being diagnosed with an arrhythmic heart and being reduced to just four EuroPro Tour starts last year.

Girrbach is also making a comeback after losing his European Tour card last season following a disappointing run to 229th place in the Race to Dubai. His opening gambit in Riffa was even more remarkable as it was his first competitive round in three months and included successive bogeys at the 7th and 8th holes to drop back to even par before he played his final 10 holes in six-under.

Hague, meanwhile, only turned pro of the MENA Tour by Arena Q-School and has made another early statement of intent after recently finishing runner-up at the NEWGIZA Open in Cairo. His was an even better recovery than Girrbach’s; one-over-par after eight holes Hague rattled off five birdies and a spectacular holed-out eagle from a fairway bunker on the 17th.

Given he is simply happy to be back playing after last year’s health scare, Kramer was doubly delighted with his start to the regional development circuit’s fourth event of 2020.

“I had played a few events at the start of 2019, but I wasn’t feeling very good. I went to the doctor and they found out I had arrhythmia of heart,” said the Dusseldorf-based 36-year-old, a former German national amateur team-mate of two-time major champion Martin Kaymer.

“It was very scary when we found out because this is no age to get a heart condition. However, after three months of complete rest, I am much better.

“Today was an amazing round for me. I was seven-under-par through the first 10 holes with an eagle on the third and on the par-4 10th. I played the last eight in one-over, but I am so happy with this round. Especially with what happened last year, and also the way I played last week in Oman where I shot an 11-over par round and was hitting the ball over the place.”

Max, the BraveHeart!
Germany’s Max Kramer played just 4 events on @PGAEuroProTour before he was diagnosed with an arrhythmic heart.
After 3 months of forced rest, Kramer, once a teammate of @MKaymer59, is back playing golf.
On Monday, he shot a 66 to lead Royal GC Bahrain Open. pic.twitter.com/AaO7xlsCbu

Girrbach, who graduated to the European Tour last season, took nearly three months off from competitive golf to get his game back in shape after his Race to Dubai disappointment, including a long trip to South Africa to work with his coach, Dougie Wood.

“I haven’t played a competitive round after missing out at the second stage of the European Tour Qualifying School. It was a disappointing season and I put in a lot of work in my technique. This is the first competing round for me to see where my game is and I am very pleased,” said Girrbach. 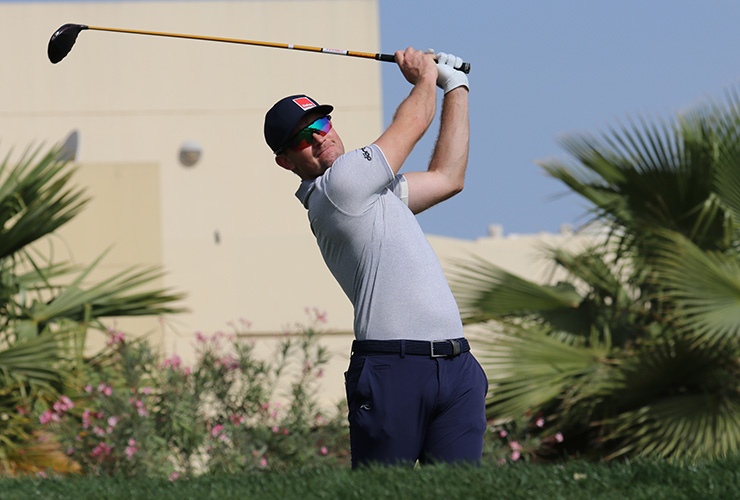 “I felt ready after the winter work and I was looking for tournaments to play. With my category on the Challenge Tour, I will only be able to play events from May. So, I asked a few friends and they all highly recommended the MENA Tour. I asked for an invite and here I am.

The consistent Hague was relishing a fast start, having opened with a 72 in finishing second at NEWGIZA Open and a 69 in tied 10th place at Ghala Open last week.

“I drove it really well all day and kept it in play even though I did not start that well. Made two three-putts from the fringe and was one-over-par after eight. I just told myself to remain patient and the birdies would come, and that’s exactly what happened,” said Hague.

“The eagle on 17th was nice towards the end of the round. I hit it into the right bunker and had 142 yards from there. Hit a good shot and it took a couple of bounces and went in.”

Frenchman Antoine Schwartz was alone in fourth place at five-under-par 67, while there was a group of six players at 68 – Scotsman Scott Henry, the Irish duo of Paul McBride and Robin Dawson, Sweden’s Mathias Weiderman and the English pair of Tom Combe and Mitch Waite.

Day 1 has come to a close in the @royalgolfclub Bahrain Open. These are the leading scores: