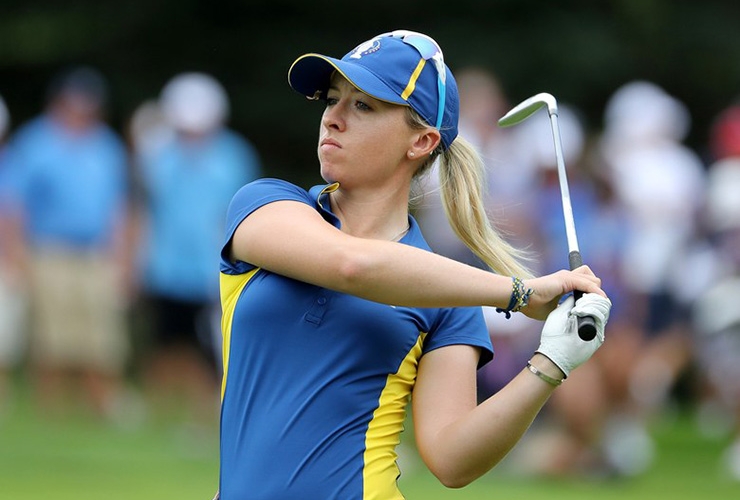 WEST DES MOINES, IA – AUGUST 20: Jodi Ewart Shadoff of England and the European team in action against Lizette Salas of the United States team during the final day singles matches in the 2017 Solheim Cup at the Des Moines Golf Country Club on August 20, 2017, in West Des Moines, Iowa. (Photo by David Cannon/Getty Images)

By Keely Levins
As if preparing to play in the Solheim Cup didn’t come with some inherent nervousness, imagine how European team member Jodi Ewart Shadoff is feeling after arriving on-site to compete in the biennial matches for the third time in her career, only for her golf clubs not to have accompanied her?

As was the case earlier this summer when Ryann O’Toole’s clubs were lost before the Evian Championship, Shadoff flew a commercial flight to Scotland and checked her clubs with the airline.

Shadoff’s husband, Adam, told Golf Digest that Shadoff flew Aer Lingus from Orlando to Dublin, then Dublin to Edinburgh. “She looked out the window in Dublin and saw that her golf clubs weren’t getting loaded onto the plane,” Adam said via Instagram direct messaging. “She told the flight attendant and they assured her that they’d be loaded.”

Amazingly, though, Shadoff isn’t the only golfer competing in the Solheim Cup facing the same unsettling situation. Angel Yin, a member of the American team, had at least two bags go missing from her Aer Lingus flight, including her clubs, en route to Scotland. LPGA officials say that a clothing bag has since arrived, but that Yin’s clubs have not.