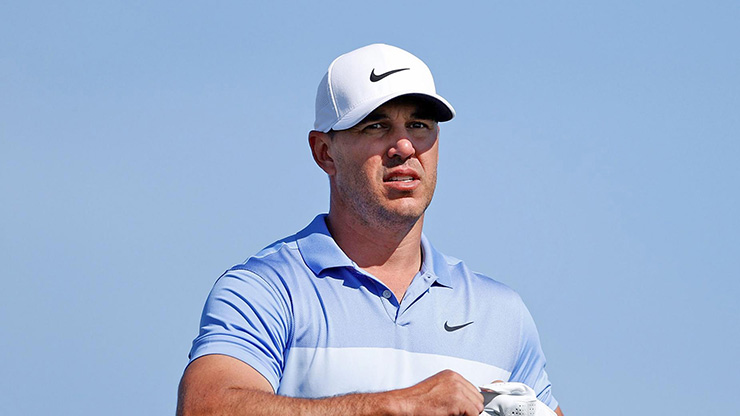 By Brian Wacker
Vince Lombardi made an appearance on Sunday night. Weirdly, but perhaps in an attempt to deliver a little divine inspiration, a hologram of the NFL coaching legend showed up during the Super Bowl preamble and recited one of his more memorable proclamations: “It’s not whether you get knocked down, it’s whether you get up.”

It was a line easily as applicable to the events that had preceded the Big Game some 2,100 miles away from Tampa.

Everybody loves a good comeback story and going into the final round of the Waste Management Phoenix Open, Jordan Spieth stood on the precipice of finally completing one.

It had been more than three years since Spieth had hoisted a trophy—the claret jug at the 2017 Open Championship at Royal Birkdale—and more than two years since he had played in the final group on a Sunday. The boy wonder who’d won 10 times between 2015 and 2017, including three majors, but had fallen on hard times and plummeted nearly out of the top 100 in the World Ranking, was on the verge.

Yet the Sunday comeback that played out at TPC Scottsdale, turned out not to be his, but rather one from a different multiple-major winner.

In the end, Brooks Koepka rallied from five strokes back with a sensational final-round 65 that was highlighted by an eagle chip-in on the 17th hole to win by one over K.H. Lee and Xander Schauffele at TPC Scottsdale. The title was Koepka’s first since the 2019 WGC-FedEx St. Jude Invitational and, more importantly, comes after an injury-plagued 2020.

“I was in some dark places mentally,” Koepka said. “I didn’t know if I was ever going to be the same again.” 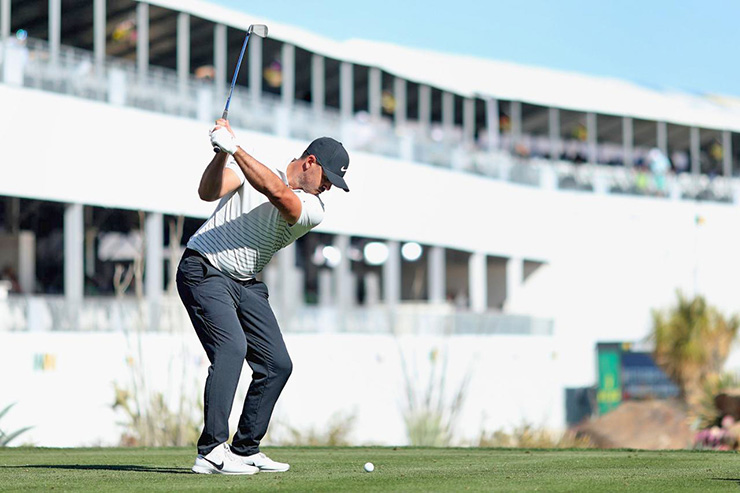 That Koepka won in front of the largest crowds of any tournament since the COVID-19 restart last June might not have been a coincidence after he admitted to struggling to play at fanless tournaments in 2020. Christian Petersen

Hyperbolic perhaps for the 30-year-old four-time major champ, but Koepka is known for finding motivation wherever he can. Be it in a slight (perceived or real) or in this case in the face of knee and hip injuries that, among other things, knocked him out of the first two months of the 2020-21 season and prevented him from playing in the U.S. Open at Winged Foot last September.

But there was also some validity to his words. Koepka, once a dominant and imposing figure on the tour who won a half-dozen times including back-to-back U.S. Opens and PGA Championships between 2017 and 2019, physically wasn’t able to hit the same kind of shots that catapulted him to the top of the game. If he had an uphill shot, he couldn’t get onto his left side and would end up hanging back, flipping the club. Being in bunkers was “horrific” because when his knee was flexed every movement pulled on it. Even bending over to put his ball down on the green he said was painful.

The lowest point came at last year’s Memorial, where he shot a final-round 80 to finish T-62. “I was in excruciating pain,” he said. “I was being told that my knee was still the same. The frustration of just trying to play and knowing I’m not myself, knowing I’m not even close to what I’m capable of doing, I can’t compete. I’m trying to compete, but I just can’t. I can’t swing the golf club like I want to.”

Though he was fully healthy at the start of 2021, Koepka continued to struggle, missing three straight cuts for the first time in his career.

Then came a wild Sunday afternoon at the WMPO, where he’d picked up his first career title on the PGA Tour in 2015. This one would prove special, too.

With 10 players tied for or within one of the lead with just a few holes to play in the tournament, Koepka hit a fairway wood just short and left of the green on the 334-yard 17th. Then he holed his chip from 97 feet for eagle to break from the pack.

There were only 5,000 fans a day permitted at TPC Scottsdale this week because of the ongoing COVID-19 pandemic, but a roar rumbled across the desert course with the fury of a sandstorm.

“I like feeling like you got to show off in front of people,” Koepka said. “I struggle with just getting my head wrapped around everything. There is just no energy [with fanless tournaments]. I’ve struggled with that a little bit, so I need to figure it out. Who knows how long we’ll be playing like this. It was nice to have fans back.

As for Spieth’s comeback, another tour win will have to wait.

A day after matching his career-low with a 61, he didn’t seem to know which way the ball was going, nor could he make his putter cooperate. The only consistency was that there was none. He shot a one-over 72—just two strokes off matching the worst score of the entire day—and finished two shots back in a tie for fourth. 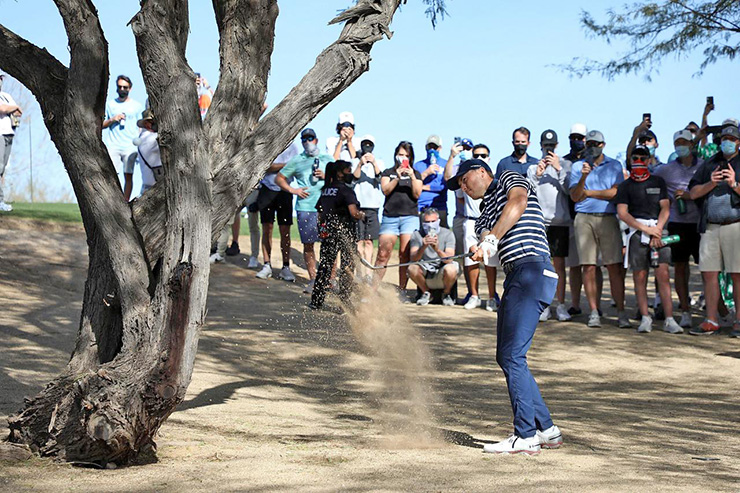 Spieth found himself playing out of the desert a bit too often on Sunday. Christian Petersen

Yet despite his struggles, Spieth still had a shot, just one stroke off the lead with five holes to play. Then he drove it into the water on the par-5 15th, missed a 10-footer for birdie on the par-3 16th and found water again on the 17th when his ball rolled through the green, his words powerless to stop it.

MORE: Diary of a Jordan Spieth fan—So much hope, too much reality on Sunday at TPC Scottsdale

Still, there were positives to take away from the week. It was his best result since his T-3 at the 2019 PGA Championship, though he was never in contention there. It was also a reminder that climbing out of the abyss takes time and happens in pieces. He was disappointed with the outcome, yes, but buoyant about where his game is taking him.

Sunday was his best chance at victory since the 2018 Masters, where he finished in third, two strokes back after a final-round 64.

“I think I believe in what I’m doing,” Spieth said. “A result like this just helps confirm what I was already feeling, and that just moves the needle the right direction.”

The same can be said for Koepka. His comeback is complete. Brooks is here. Jordan will be, too. One day.