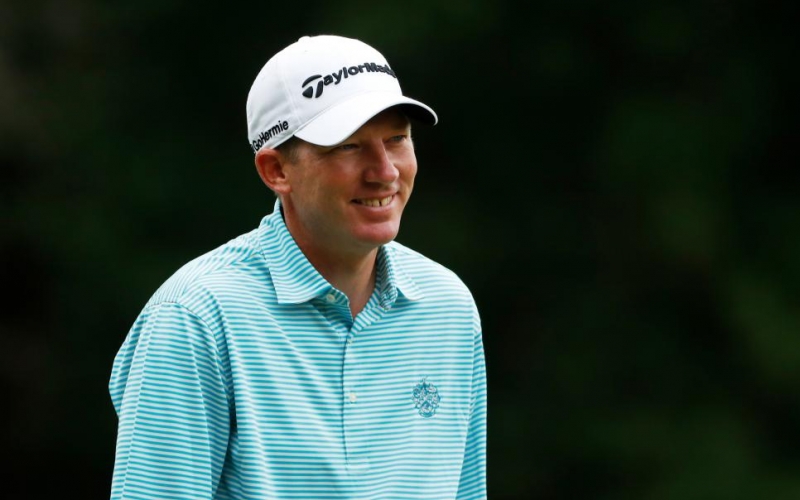 By John Feinstein
Several years ago, I was standing on the practice range at a golf tournament talking to then-PGA Tour commissioner Tim Finchem, who worked for President Jimmy Carter and Vice President Walter Mondale, before he got involved in golf.

“Better not stand too close,” Finchem said with a smile. “If you do, someone can get both Democrats who are part of golf with one shot.”

Finchem was exaggerating—but not by much. The number of professional golfers who identify as Democrats is pretty close to the number of players in the game’s history who have won double-digit major championships. (For the record, that number is three.)

I thought about that on Sunday as I watched Jim Herman battle Billy Horschel down the stretch at the Wyndham Championship. I’d never root against Horschel, who is one of the tour’s good guys. But I couldn’t help but feel myself wanting Herman to win because he needed to win a lot more than Horschel did.

Herman had entered the tournament in Greensboro 192nd on the FedEx Cup points list, miles away from being one of the top 125 who would qualify for this week’s first round of the playoffs. He had struggled all year, making just seven of 18 cuts and, at 42, he had to be wondering just a little bit how much longer he was going to be able to play competitively.

Herman once worked for President Donald Trump at Trump National Golf Club in Bedminster, N.J. He has played frequently with Trump—both before and after he became president—and talks often about how much Trump has encouraged him about his golf career through the years.

Herman is very much a Trump supporter. I am, if you haven’t already guessed, very much not.

And yet Herman and I get along very well. I remember a lengthy locker-room conversation with him shortly after he won for the first time on tour, in Houston in the spring of 2016. He was my kind of story: a grinder who had won for the first time at the age of 38 and had come a long way from giving lessons at Trump National. He was bright, funny, clearly devoted to his family. The kind of player I’d like to write about and have a beer with.

In many ways, Herman is a perfect example in these polarized times of not being defined by politics. This is a lesson I’ve learned through the years covering golf: We can all put politics aside, even now.

One of the first events I covered while researching A Good Walk Spoiled was the 1993 Ryder Cup. That was the year when President Bill Clinton invited the American team to visit the White House before the players boarded the Concorde to fly to England. Several players balked at going. The captain was Tom Watson, about as dyed-in-the-wool Republican as there is on planet Earth. He told the players, “We’re going over there to represent the United States. Bill Clinton is the president and the First Golfer. We’re going.”

A few weeks later, after the U.S. team had won the matches at The Belfry (the last American win overseas), I asked Davis Love III why so many members of the team had balked at going to the White House. You won’t meet a more reasonable human being than Love. His answer, though, was direct.

“If it had been President [George H.W.] Bush, who we all respect, it would have been different,” he said. “But after Clinton lied about raising our taxes, we weren’t that eager to meet him.”

In fact, Clinton had promised to raise taxes on anyone making more than $200,000 a year, and had done so. When I pointed this out to Davis, he shrugged and said, “Whatever.”

Athletes voting their wallets is hardly unique to golf. When Charles Barkley informed his mother years ago that he was thinking of running for governor of Alabama as a Republican, his mother said, “But Charles, Republicans are people who always want to pay less taxes.”

Phil Mickelson once made the point to me that I mislabeled him when I called him conservative. “I’m really pretty liberal on most issues,” he said.

I gave him credit for being honest.

Most golfers—and most successful professional athletes—are like Mickelson. If you propose lowering their taxes, they like you. If you propose raising them, not so much. Many athletes don’t even bother to vote. When I was researching A Good Walk Spoiled, I asked Billy Andrade if he was a registered Republican or a registered Democrat.

“I’m not registered,” Billy answered. “I don’t want to get called for jury duty.”

When I asked his wife, Jody, very much a Democrat, why she didn’t insist that he register, she shrugged and said, “If he registered, he’d just vote Republican anyway, so I don’t push him.”

In 1994, I was at dinner during Doral week with Watson, Goydos, the late John Morris (who was then the tour’s director of public relations) and several other writers. Watson began railing against people on welfare, saying they should all be working. Goydos, who was in awe of being at the same table with Watson, finally spoke up.

“You know, Tom, I knew a lot of the families you’re talking about when I was teaching,” he said. “Are there welfare cheats? Sure. Just like there are Wall Street cheats. But most of the people I knew wanted to work, didn’t want to be on welfare—in fact, hated the idea of being on welfare.”

Watson listened to Goydos, and they then engaged in a lively but not-rancorous conversation. Two years later, when Goydos won at Bay Hill, his first PGA Tour win, I ran into Watson that night.

“I saw you walking up 18 with your boy,” Watson said. (Everyone on tour called Goydos “my boy” back then.) “I thought about that dinner at Doral, and I was really glad he won. We need more people like him out here—thoughtful, smart.” He paused and smiled. “Even when they’re wrong.”

Everyone knows that Bruce Edwards was Watson’s caddie for most of 30 years until the dreaded disease ALS killed Bruce in 2004. Tom and Bruce argued politics often—specifically the Second Amendment (the right to bear arms), which Watson is very much for. Bruce was very much opposed to it. Since Bruce’s death, Neil Oxman, who runs political campaigns for Democrats, has often caddied for Watson. They are almost as close as Tom and Bruce were.

“We don’t talk politics,” Oxman likes to say. “When we do, I don’t listen to him, and he doesn’t listen to me. It works well.”

Tom and I have run a charity golf tournament in Bruce’s name to raise money for ALS research since 2005. Last year, when Tom came to Washington for what we both fondly call The Bruce, he spent Sunday on a golf course with Donald Trump.

The next morning at breakfast, we talked about his beloved Kansas City Chiefs and my beleaguered New York Jets. Then we went to work raising money for a cause we both believe in deeply.

Watson and Jim Herman will vote one way in November; I will vote differently. And I hope I’ll have lots to talk about with them when the election’s over, regardless of the outcome.