A budding ‘Brooks vs. Rory’ rivalry is the best thing to come out of the Tour Championship 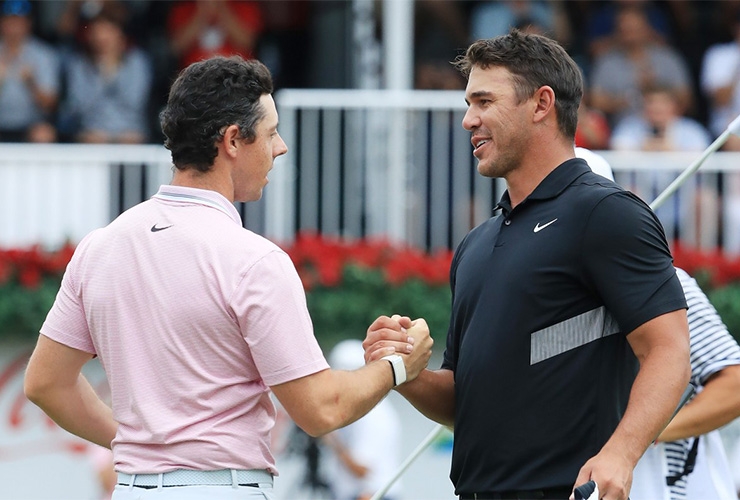 By John Feinstein
Sunday was a great day for the PGA Tour. It wasn’t because tour officials got lucky when Rory McIlroy not only won the FedEx Cup but the Tour Championship proper. His 13-under-par 267 was the best score of the week at East Lake Golf Club in Atlanta, three strokes better than Xander Schauffele, who additionally, finished second in the handicapped division.

Nor was it a great day because the NBC crew got to go on endlessly about how much money the players were going to take home. “Eight checks for more than a million dollars,” Dan Hicks semi-gasped at one point.

To his credit, Hicks did note that McIlroy had said earlier in the week that, while he’d be happy to win the $15 million first prize, his goal whenever he tees it up, is to win the title. McIlroy is long past the point where $15 million changes his life. The same is true for all the other millionaires who cashed in on Sunday.

What made Sunday an important day for golf is this: McIlroy and Brooks Koepka went head-to-head in the final pairing for the second time in a month and—this time—McIlroy won. Previously at the WGC-FedEx St. Jude Invitational, Koepka shot a final-round 65 to win his third title of the year. McIlroy fell back to a tie for fourth with a 71 that day.

This time, the roles were reversed. It was McIlroy who went low, with a four-under-par 66 (best score of the final round) and Koepka who spun his wheels, shooting a surprising two-over-par 72 to drop into a tie for third.

Would it have been better if, in both cases, the two had duelled one another for 18 holes, with one dropping a winning birdie putt at 18? Yes.

But what we appear to have now is a real rivalry between the two best players in the world. “I wanted some revenge for Memphis,” McIlroy said, moments after his last birdie putt dropped in Atlanta.

RELATED: McIlroy buries some demons and earns $15 million for winning the FedEx Cup

It can be argued that golf hasn’t had a good old-fashioned back-and-forth rivalry at the top of the game since Jack Nicklaus and Tom Watson.

Greg Norman and Nick Faldo? It never went very well for Norman—except for the 1993 Open Championship—when both were in contention. It was a rivalry with small caps, not a RIVALRY.

The same was true of Tiger Woods and Phil Mickelson. Let’s be honest, that was more of a hammer and a nail relationship between the two most of the time. Mickelson had his moments and is a no-doubt Hall-of-Famer, but Woods was on a completely different level than anyone from 1997 to 2008.

Once upon a time, it looked as if Sergio Garcia would be Woods’ rival, but it never happened, except in their personal sniping at one another. 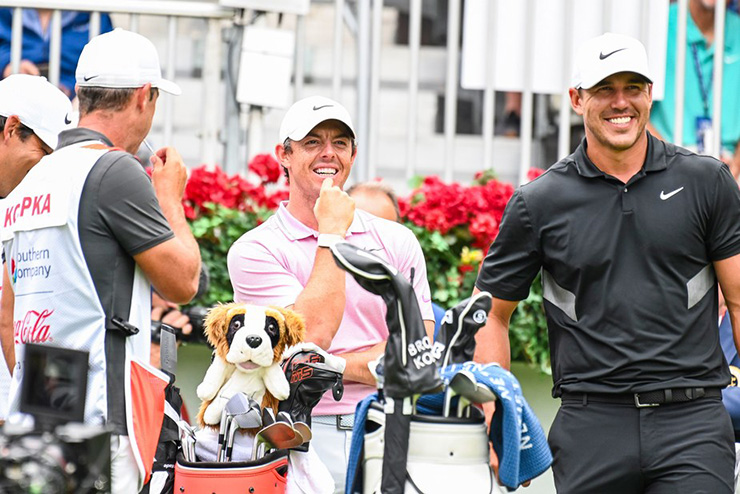 McIlroy and Koepka have a friendly, but competitive, relationship. (Keyur Khamar/PGA Tour)

McIlroy and Koepka have the potential to be a RIVALRY. Each has won four major championships. McIlroy is 30—exactly 364 days older than Koepka, who will turn 30 next May. McIlroy has a deeper overall resume—17 PGA Tour wins to Koepka’s seven—four Ryder Cup wins in five appearances to Koepka’s 1-1 record. But it’s worth noting that McIlroy’s fourth major, the 2014 PGA, came before Koepka was even a fulltime player on tour. McIlroy was a prodigy; Koepka not a late bloomer of sorts.

Their personalities are also just right for this sort of thing. There is clearly mutual respect. And they are both hyper-competitive, though Koepka doesn’t show it as much on the golf course as McIlroy does.

Plus, both are outspoken, willing to talk honestly about issues—something golf could use a lot more of from its best players.

McIlroy never ducks a question, never goes, to quote Jordan Spieth’s description of himself, “PC,” when talking to the media. Even if it means taking a shot at his own profession. Three years ago when, after saying (like many players) he would skip the Olympics, McIlroy added when asked that he probably wouldn’t watch Olympic golf but would instead watch, “track and field, swimming, diving, the sports that matter.”

This past week, with the tour eager for players to embrace its latest playoff format, McIlroy politely but firmly wondered how an important tournament could actually stagger the starting scores for the 30 players. “I don’t think you’d ever see that happen in a major,” he said. Whether in a press conference or one-on-one, McIlroy is always a must-listen.

Koepka has always had the same potential to be a teller-of-truth, but it’s only in the last two years that people have started to listen to him as he’s risen to be the world’s No. 1 player.

In the past year, he’s defended himself against charges that he’s not emotional enough on the golf course. Like McIlroy, Koepka has talked openly about the slow play issue in general and Bryson DeChambeau specifically. This past week he said he really didn’t care if people were bothered by his agreeing to pose nude for ESPN.

And, of course, earlier in the year, Koepka took on Brandel Chamblee after the Golf Channel analyst said that he believed the only players who could challenge Woods as the world’s best players were McIlroy and Dustin Johnson. Koepka responded with a tweet showing Chamblee wearing a clown’s nose. Then, Koepka backed up that up by going out and winning the PGA Championship wire-to-wire at Bethpage Black, leaving Chamblee and everyone else spluttering about how brilliantly he played.

RELATED: The new Tour Championship wasn’t perfect, but it worked

There are other players who have the potential to beat Koepka and McIlroy in the next few years. Johnson and Woods, at their best, can play with anyone—including Koepka and McIlroy—much as Lee Trevino and Gary Player could best Nicklaus and Watson. It’s also difficult to believe that Jordan Spieth isn’t going to find his brilliance again at some point and the tour has a slew of young 20-somethings coming along behind Koepka and McIlroy.

But Koepka and McIlroy already have Hall-of-Fame worthy resumes and both should be coming into their peak years. Koepka’s player-of-the-year for 2019 because he had one thing on his resume that McIlroy lacked: a major title. McIlroy was remarkably consistent all year but couldn’t break his drought in majors, now five years and counting.

McIlroy is honest about how much he wants to win the Masters, which would cap the career Grand Slam. He doesn’t go down the, “I’ll have had a great career if I never win the Masters” cop-out road. When he does break through and win at Augusta, I suspect he’ll go on and win a couple more. The same is true of Koepka at the Masters and in the Open Championship. I believe both have the potential to get to double-digits in major victories.

Which means they are likely to go head-to-head with important titles—far more important than Memphis or Atlanta—at stake. To become a truly great rivalry, golf needs them duelling late on Sunday at Augusta or, next year at Winged Foot, Harding Park or Royal St. George’s. And into the future.

How many majors each might win is impossible to predict. But it’s likely that—win or lose—they’ll continue to be outspoken on issues and answer questions honestly.

They’re both good guys and great players. Very different, but worthy of our admiration on and off the golf course.

And, even now, it’s pretty clear they burn to beat one another.

All of that can only be good for golf.