Solheim Cup: Danielle Kang was built for the Solheim Cup 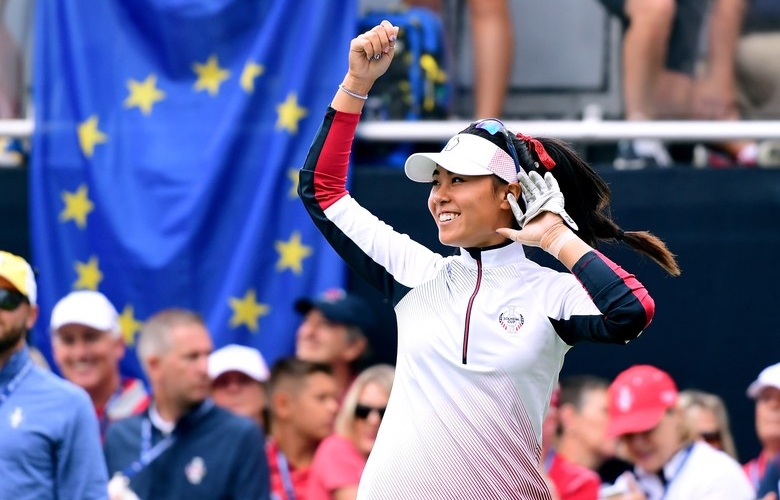 WEST DES MOINES, IA – AUGUST 18: Danielle Kang of Team USA plays with the crowd on the first tee during the morning foursomes matches of the Solheim Cup at the Des Moines Golf and Country Club on August 18, 2017 in West Des Moines, Iowa. (Photo by Harry How/Getty Images)

By Keely Levins
DES MOINES, Iowa — “I want it to be so loud that I can’t hear my caddie,” Danielle Kang said in her Solheim Cup press conference on Wednesday.

The statement got laughs from the media and her teammates, but Kang wasn’t kidding. Her shoulders must be sore from all of the times she lifted her arms in the air, coaxing cheers from the fans on Friday. On the first tee in the morning match, she wouldn’t address her tee shot, the first shot she’d ever hit in a Solheim Cup, until the fans were cheering loud enough. Once the crowd hit a volume she liked, she launched it down the center.

Kang is a Solheim Cup rookie, but she appears right at home.

It makes sense that she’s comfortable at her first Solheim Cup. First, she’s had success in match-play events: She won back-to-back U.S. Women’s Amateur titles in 2010 and 2011. But, more importantly, the event fits her personality. She’s competitive, energetic, has a good sense of humor and isn’t afraid to show emotion. If there’s one thing the crowds here like, it’s that. Her rounds were full of smiles, cheers and fist pumps.

On the 18th hole of her morning alternate-shot match, Kang and her partner, Lizette Salas, were 1 up on Carlota Ciganda and Caroline Masson. Kang put her approach to the right side of the green on 18, leaving Salas with a difficult short-sided chip. Salas hit an impressive chip from the thick rough, leaving Kang with about five feet. Their opponents had already made par, so Kang needed to make the putt to win the match. Just like she pummeled her first drive down the middle, she found the center of the cup with the match-winning putt.

“I absolutely love this. It’s the most exciting tournament I’ve ever played in,” said Kang, who won the KPMG Women’s PGA Championship this year, her first professional win. “I want to hear this roar. I want to hear everyone keep chanting. I love it.”

Salas felt just as good about having Kang on the team this year.

“I’ve been waiting six years for this,” said Salas. “We knew we’d be great at this. She picked me up when I was down. She didn’t play it like a rookie. She played it like a major champion.”

In the afternoon, Kang was paired with her good friend Michelle Wie for four-ball. Heading into the 16th hole, the pair were one-up on Jodi Ewart Shadoff and Madelene Sagstrom. Having watched the other three players in the group make par, Kang stood over a breaking, downhill birdie putt of about six feet. She took her time, and threw down another fist pump as it rolled in. It was her sixth birdie of the match. The match ended on the next hole when Shadoff, Sagstrom and Wie all made par, and Kang’s birdie putt was conceded.

After a few brief interviews on the 17th green, Kang sat down for the first time on Friday, still smiling, to watch her teammates come in.