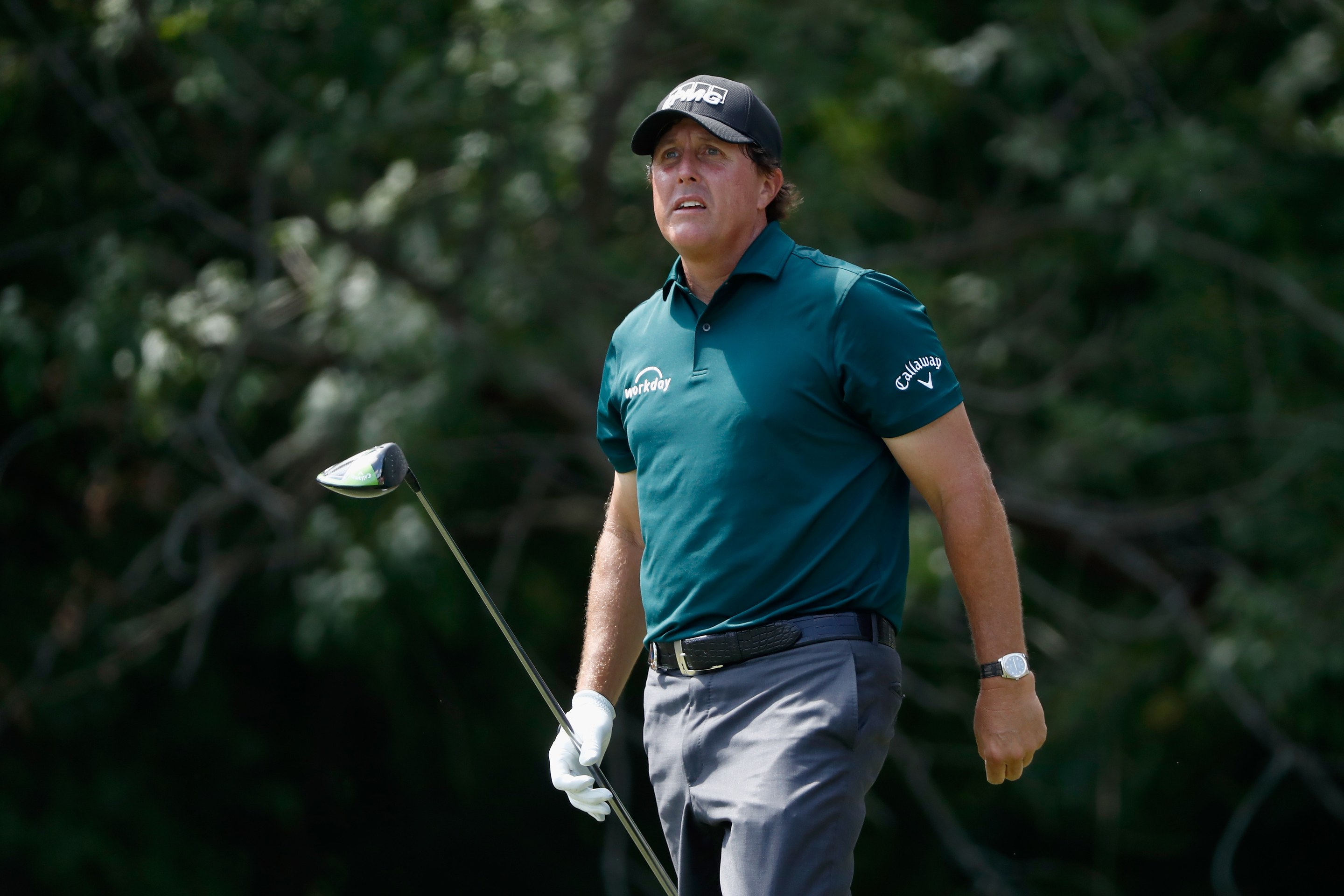 By Dave Kindred
Phil Mickelson looked old. Not old in any real human sense. But old and drawn and defeated by gravity, looking old the way athletes, once young, suddenly look old. He is 47. He stood at the back of the first tee. He drank water. He stood away from everyone else, waiting his turn. By the gallery rope, I heard a man say, “Phil probably won’t be here tomorrow.”

Nope. Gone. He would miss the PGA cut by a thousand, just as he had missed the British Open cut a month ago. Mickelson today was a Mickelson we had never seen before. Bones was gone, the caddie. Jim Mackay was taller and leaner than Phil. Bones standing by the bag made Phil look better. No Bones now, a break-up after all those years winning. And there’s more wrong with this picture. There’s Phil’s involvement in that insider-trader thing which might or might not be a thing but it’s something. There’s the psoriatic arthritis, too, and when you’re 47 with arthritis burning your joints and you say it’s no problem, old people with arthritis say, “Oh, really?”

So Phil hit his tee shot.

A single voice in the gallery said, “Good shot, Phil.”

He touched the bill of his cap and walked on, already at a distance behind his two playing partners, and I thought again of the Bobby Jones line on golf and the poor people afflicted with the game. We are all, the great man wrote, “dogged victims of inexorable fate.” Here was Phil Mickelson, one of the best ever, moving on leaden feet, moving to no purpose, really, moving to finish the day’s obligation and get to the private jet waiting to fly him home.

At the second hole, an “Oooh” as his 20-footer for birdie slid by. At the third, a shout from the gallery, “Hey, Lefty! We love you, buddy, we love you,” and Mickelson touched his cap and turned his face to the voice, and he rolled a 20-footer four feet past, and I wondered when this had last happened – in two rounds, through 30 holes, he had not yet made a birdie.

Then, on his 31st hole of this PGA Championship, a par-3, he made a 16-footer for birdie. After taking the ball out of the hole, Mickelson walked away smiling and pumping both fists.

“YES!,” he said, loudly enough to be heard in the bleachers. “YES!”

“I’m having a tough time controlling my thoughts and not letting it wander to what I don’t want to have happen,” Mickelson said.

The last time I saw him pump both fists that way, at waist level, he had threaded an iron shot off pine straw and between trees to reach the 13th at Augusta, certifying the victory that would come.

But that emotion that day was a young man’s, real and strong and convincing. Today’s was a grumpy old man’s laughing sarcasm. The blind squirrel had found an acorn and chattered to his buddies, “YES!”

He followed the birdie with a hacker’s double bogey when he tried to bump a shot against a berm only to miss his spot and send the ball skittering 60 feet past the pin and off the green. Worse, when he finished up the mess, someone called out, “We still love ya, Phil.” No touch of the cap that time. Somehow he followed with two birdies in a row and, walking to his last tee shot, he stopped to give a souvenir ball to a small blonde girl, Emily Beard, 7, at her first golf tournament.

Fun for a kid, not so much for Phil. Later, done with a round of 74 following yesterday’s 79, Mickelson tried and failed to explain what was going on. He liked the way he struck the ball. He just didn’t like where it went. “I’m having a tough time visualizing the shot,” he said. “I’m having a tough time controlling my thoughts and not letting it wander to what I don’t want to have happen.” 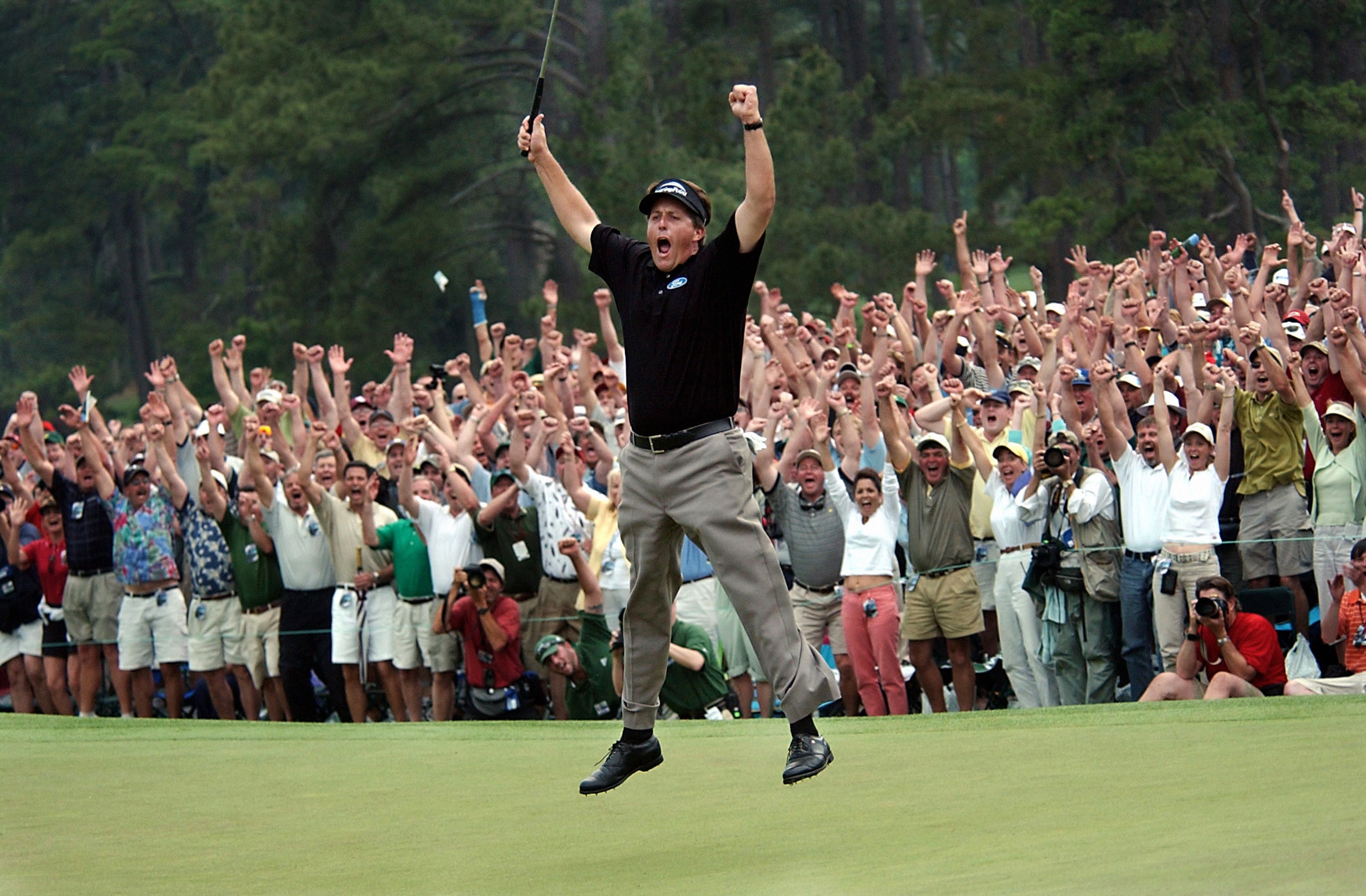 Mickelson has now gone 0-for-16 since he last won a major. It’s the longest dry spell in majors since he won his first, the Masters of 2004. That Sunday, on the 18th green, Mickelson leaped in celebration as his last putt disappeared. Once, he was young. We saw him coming. He would win four more majors. We would have thought him the greatest of his time except he lived in the time of Tiger Woods.

This year he was a so-so T-22 at Augusta, a no-show at the U.S. Open when he skipped –- yes, chose to pass — the only major he has not won to hear his daughter speak at high school graduation, and now has missed the cut in back-to-back majors.

As Mickelson walked onto the green at the end of today’s round, the gallery rewarded him with a round of applause, a polite smattering of hands, the sound like a spring rain falling against window panes, a soft music played for a man we saw coming and we now see going.