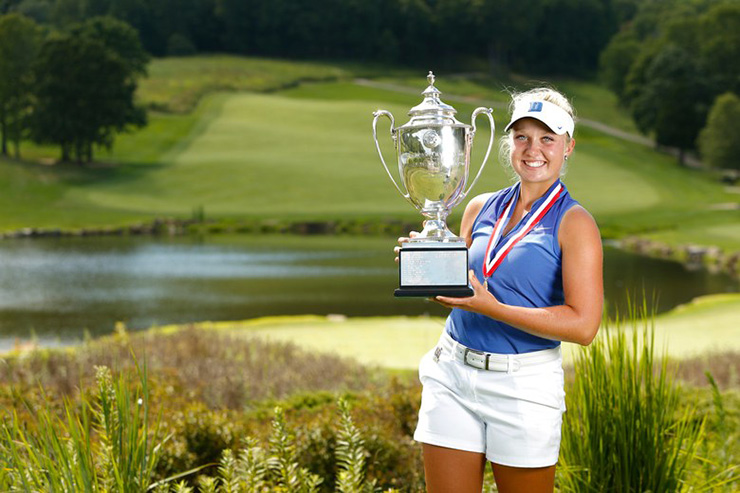 Less than 24 hours after shedding tears of frustration and sadness at Missouri’s Boone Valley G.C., Erica Shepherd was crying again, only this time out of joy. The 16-year-old from Greenwood, Ind., had accomplished a lifelong golf dream by capturing the U.S. Girls’ Junior title, defeating Jennifer Chang in the 36-hole championship match, 3 and 2.

“Ever since I was little, I’ve always told everyone when making my goals, this is the goal that I have to accomplish,” Shepherd said, her emotions obvious.

The ultimate victory came a day after one of the toughest wins of her young career. On the 19th hole of her semifinal match on Friday, Shepherd’s opponent, Elizabeth Moon, missed a three-foot birdie putt that would have given her the win. Before Shepherd, a high school senior-to-be could concede the tap-in par putt, Moon hastily pulled her ball back.

Afterward, Shepherd was upset with the reaction to what had happen on social media, much of it negative toward how she handled the situation. Shepherd said she would have conceded the putt and the pair could have played on, but the *Rules of Golf * prohibited her from doing so retroactively.

Trying to block out the emotions from Friday was going to be a challenge for Shepherd, but she was helped by the fact that her final opponent, Chang, is a good friend who came up to her before the start of their Saturday match with a message.

“I was on the putting green, and she just walked toward me and gave me a hug,” Shepherd said. “She just asked if I was OK, and I kind of broke down and started crying, then she gave me this whole speech about like how there was nothing I could have done about it, and that just really boosted me back up and got me to regroup.” 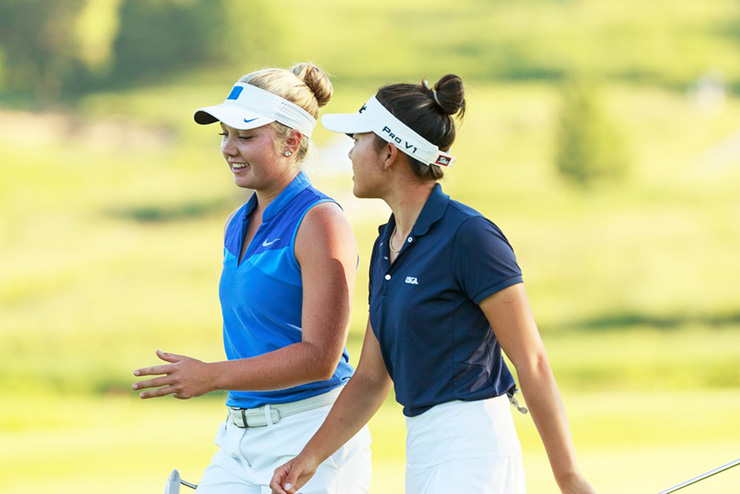 Erica Shepherd and Jennifer Chang talk as they walk off the third hole during the championship match at the 2017 U.S. Girls’ Junior. (Photo by Copyright USGA/Steven Gibbons)

Shepherd proceeded to jump to an early 2-up lead through five holes, an interesting spot for Chang, 17, a rising high school senior from Cary, N.C., as she had not trailed in any of her previous five matches. Chang bounced back, winning four of the next seven holes to gain a 1-up advantage. But Shepherd then won five of the final six holes in the morning to take a 3-up advantage into the afternoon 18.

Shepherd stretched her lead to 4-up with 12 to play, only to watch Chang cut her opponent’s edge to 1-up with five left. It was then that Shepherd seized the moment, winning the 32nd hole with a birdie (after Chang had missed a birdie effort of her own), then made birdie on the 34th hole to close out the match and the championship.

Afterward, Shepherd described a call she received the previous night from Hardin that helped calm her nerves and boost her confidence.

“She just told me she knew how I felt because she can relate to me caring too much about what other people think,” said Shepherd, who has verbally committed to play college golf at Duke, naturally where Hardin competed. “She told me to just be Erica, and to not let what other people were saying get in my head or distract me.”

Shepherd’s victory was a milestone of sorts as she became the first lefty to win the Girls’ Junior title in its 69-year history. She became the second left-handed female champion in USGA history, joining another Indiana native, Julia Potter, the 2013 and 2016 U.S. Women’s Mid-Amateur champ). Coincidentally, the last time Boone Valley hosted a USGA event was the 2007 U.S. Junior Amateur, won by another lefty, Cory Whitsett.

“I’m really proud of Erica,” Chang said. “She’s one of my best friends, and it’s a fun match with her. I mean, there’s that intensity, but it’s fun.”

“I was definitely down before that,” Shepherd said, “but as soon as I got on the tee, I was looking at the trophy, and I’m like, I have a chance to win the U.S. Girls’ Junior today, so I’m not going to let any of that get in the way.”