The Open 2017: Spieth 18 holes from a major masterpiece at Birkdale 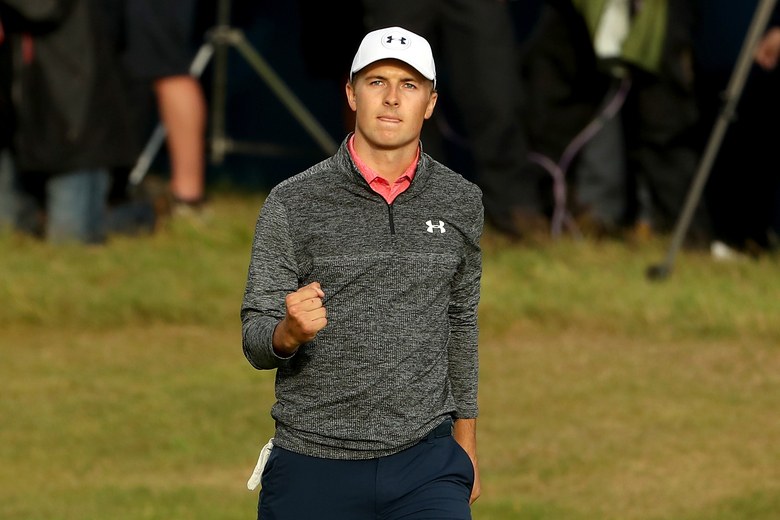 By Kent Gray at Royal Birkdale
As Jordan Spieth grows into his greatness, he’s learning to read the situation as well as the crucial putts.

After sticking his approach on the right hand fringe of 18 at the end of an extraordinary Saturday at the 146th Open Championship, the 23-year-old Texan instinctively reached for his back pocket. But something stopped him withdrawing his greens notebook, as important a putt he was now blindly walking into and even before Matt Kuchar wandered over and urged his final pairing pal to soak in the moment.

“Typically when I’m walking up to greens, I’m trying to just get an idea of what the putt is going to do as I walk up. I started to take out my book, and saw the 18th hole and I’m like, I can’t. This is not worthy of this.

“Everyone is giving us an ovation and it’s a time to appreciate that, enjoy the walk, but also to say ‘thank-you’ for the support that these crowds give.”

After what happened next, you sense the mutual appreciation game might well be skewed more heavily in Spieth’s favour the next time he walks between the towering grandstands surrounding Royal Birkdale’s homeward hole.

With one final sweep of his impossibly co-operative Scotty Cameron blade, Spieth centre-cupped a downhill 20-footer, a gentle little right-to-left curler. Strike that. This was a brutal right-jab, left-hook combo to Matt Kuchar’s chances of a maiden major, if only figuratively. Kuchar very nearly floored himself trying to will his shorter birdie attempt into the hole shortly afterwards, only for the kiss his ball gave the left edge of the cup to be cruelly rejected.

It was not quite as fatal a blow as it was to surely every other name on the giant yellow leaderboards perched high above the drama below, but it was close. Three shots is by no means an insurmountable final round deficit for Kuchar to make up but then it would have been so much easier had he started one back Sunday as could have been the case had the roles been reversed on 18.

There had been another magical putt on the final hole earlier on Saturday when Branden Grace tapped in a two-footer for major immortality, the last of an historic 62 strokes. Grace bizarrely had no clue what he had achieved, the lowest score in 157 years and 442 majors. But Spieth’s poker faced fist-pump said it all. Wire-to-wire? Why not.

For after Grace’s amazing morning, Spieth owned the late afternoon over the Southport links.

When Kuchar birdied 14 and 15 to briefly draw within one, Spieth birdied 15 right on top of him. Kuchar found a pot bunker off the 11th tee en-route to a double bogey on 16 but seemed to have clawed his way back into it with a birdie on 17 courtesy of an up and down gain from the sand before stiffing his approach on the last.

But his foothold in what shaped as a classic final round duel slipped on the 18th green.

“No, no, that’s expected with Jordan,” Kuchar said of Spieth’s improbable last putt. “I had a very good feeling about my putt, thought I’d knock it in. If Jordan made his, I was going to make it on top, but mine slid by the edge. That’s part of the game.”

Spieth went back to the par 5 17th, where he found the same green side trap as Kuchar but did well to escape with par, to put his epic final green putt into sharper context.

“I felt like I got a tough break on 17. I thought I hit a pretty good shot in there that, if it’s a yard left, it is an eagle putt, but instead I’m half plugged up towards the lip [of the bunker],” said Spieth. “That was a bad break but 18 I made up for that half shot there, if not another one.

“I thought [his approach into 18] was going to be in the bunker, but I guess it hit right on the mounds there and had enough spin to be able to check. When I got up to the green I was happily shocked. And then from there I thought this is where I normally capitalise and I kind of make a scrappy birdie. And even though I had missed quite a few putts from that range, and I had a lot of them today, that one just felt good looking at it. I could cast it out a little bit, and put the right speed on it. With a few feet to go, it was going to go in and it was a good feeling.”

Catch up with all of the action from a record breaking day at Royal Birkdale. #TheOpen pic.twitter.com/rD5g73y1g7

So after a second 65 of the week, Spieth is -11 for the championship and a three quarters of the way to three quarters of a career grand slam. In such sublime control from tee to green all week, it’s difficult to see him coughing up the Claret Jug to Kuchar (-8), much less anyone further back in his rear-view mirror: U.S. Open champion Brooks Koepka (68) and unheralded Austin Connelly (66), a duel Canadian and US passport holder trying to get a foothold on the European Tour,  start Sunday six shots back in a tie for third.

“I’d much rather have it this way than any other way unless I could be 15 clear, that would be the only thing. I think less number of people towards the top or at least a bit of separation is definitely more comfortable,” said Spieth.

For a fleeting moment on the 15th Saturday it didn’t look as comfortable. Indeed a final round duel beckoned.

Maybe it wouldn’t be as as epic as Jack and Tom’s 1975 ‘Duel in the Sun’ at Turnberry or the astonishing Mickelson-Stenson sequel at Royal Troon last summer, the ‘Duel of the Sons’ as it has since been coined.

But with the British challenge having long since stalled on moving day at Royal Birkdale – Ian Poulter and Rory McIlroy are both nine shots in arrears of the runaway final pair – at least a clear-cut shootout between the clean-cut U.S. Ryder Cup pals promised a dramatic Sunday narrative.

Cue another ‘son’, America’s prodigal one. With one final putt on an this unforgettable Saturday, Spieth is now the author of his own destiny. Of course, he does have that greens notebook in his back pocket, just in case he needs help with the crucial final lines.