4 Shots you need to win at Augusta (and Anywhere) 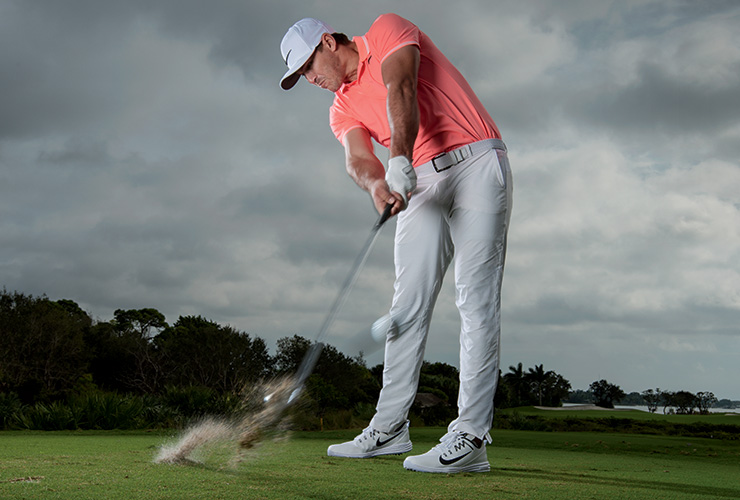 A lot of people have told me my game really suits Augusta National. I’d like to agree. The first time I played there, on the eve of my first Masters, in 2015, I loved it. It’s such a special place, and the course teaches you something new each time you play it. My results so far have been fair, finishing T-33 as a rookie and T-21 last year, but I’m optimistic about this year. I’m healthy again, and I feel like I finally have all the shots you need to play Augusta well. The way I count, there are four. Here I’ll show you how to hit them.

Of course, knowing the right shots to practice and doing the work is only half the equation. The other half? Controlling emotions. When we arrive at Augusta National each April, it’s been eight or nine months since we played in our last major, the PGA Championship. Guys are ready to go, and many put so much pressure on themselves that it’s hard to play like they should. That’s an important lesson for any golfer. Whatever round feels like your Masters, tamp the adrenaline. Do whatever it takes to stay cool.

Once you’re relaxed, these four shots will help you play great anywhere. And if you ever land the invite to ANGC, you’ll be especially well prepared. —with Max Adler 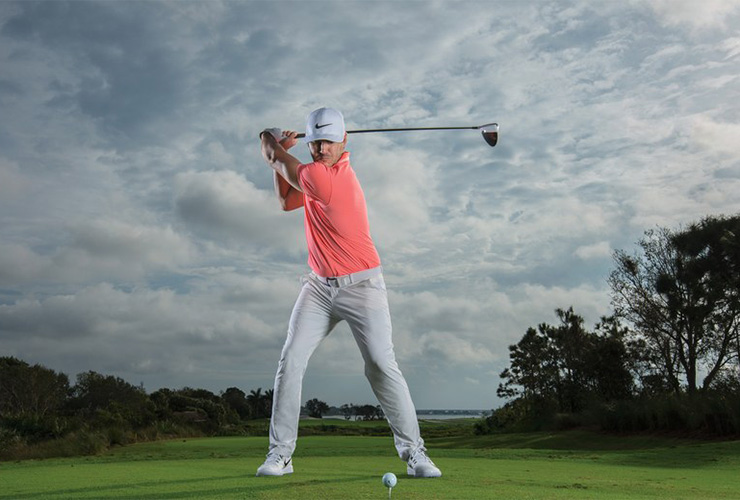 BIG DRAW
A lot of the tee shots at Augusta set up best for a draw. Or for lefties like Phil and Bubba, a power fade. The par-4 10th and the par-5 13th are the most critical spots to turn it right to left. You’ve probably heard the basic tips on hitting a draw: Aim your feet and shoulders at the right side of the fairway, aim the clubface at the middle of the fairway, then swing along your toe line. Solid advice, but what I’ve found most helpful is to start the downswing slooow. Make an emphatic pause at the top of the backswing (above), then feel zero rush to get the club down to the ball. With my weight on my right leg longer than normal, the clubface is going to close. If I can make a nice, slower swing driven by my arms, I know I’ll see the ball turn over right to left.

If you struggle to do this with a driver, use a 3-wood. The extra loft and shorter shaft make it easier to draw the ball. Besides, on most holes that demand this shot, distance isn’t your priority. The last thing you want to do is hit it through the fairway. 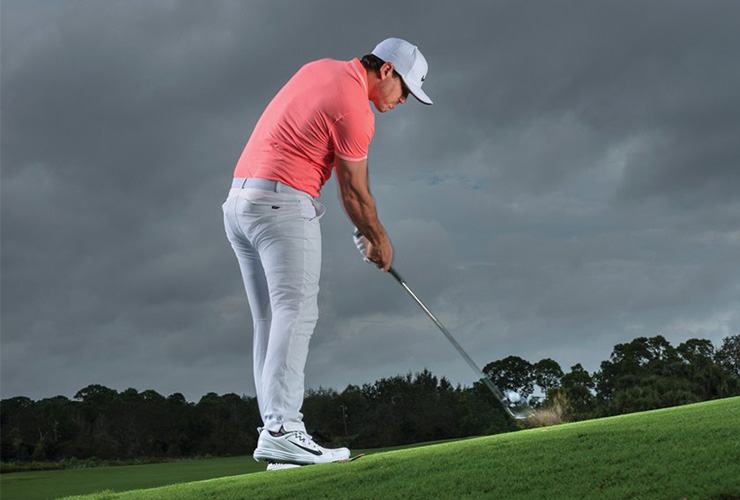 AWKWARD APPROACH
What’s really unique about Augusta are the uneven stances in the fairway where the green complex is asking you to hit the opposite trajectory than the stance promotes. For example, on the 10th fairway the ball will be above your feet, yet the green tilts in a way that it won’t hold a draw. You need to fade the approach (or at the very least, hit it straight) despite the feeling you’re hitting a baseball because the ball is perched so high (above). The fact you’re likely swinging a middle iron or long iron only makes it tougher. Outside Augusta, you almost can’t find comparable terrain to practice these shots.

Natural athleticism goes a long way, but to be good at working the ball from odd stances you need to be in control of the bottom of your swing. My teacher, Claude Harmon III, showed me a great drill for this. Switch your hands to take a cross-handed grip (below), then hit shots that travel 60, 70, no more than 100 yards. Go easy, making only half-swings on both sides to protect your shoulders. You’ll hit the first few to the right, but stick with it. Here I have a 4-iron, but I’ve used every club from driver to wedge with this drill. Your only goal is solid contact. It will help you feel exactly how the club is meant to move through impact. Whatever your tendency—releasing the club too early or too late—cross-handed swings can help you feel the opposite.

Though it’s smart to go easy with this drill, I’ve seen Rickie pure it 280 cross-handed. We were on the range at a tour event, and he said he wondered how long it would take for someone to notice his grip. Took eight or nine balls. I’ll stick to my 100-yard shots, thank you very much. 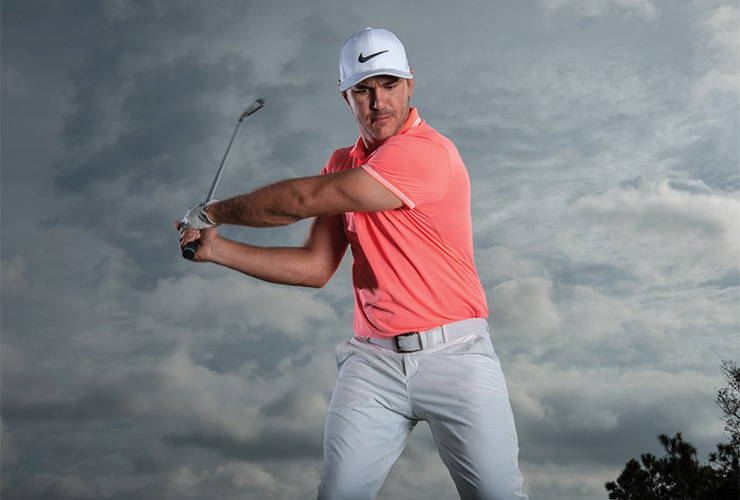 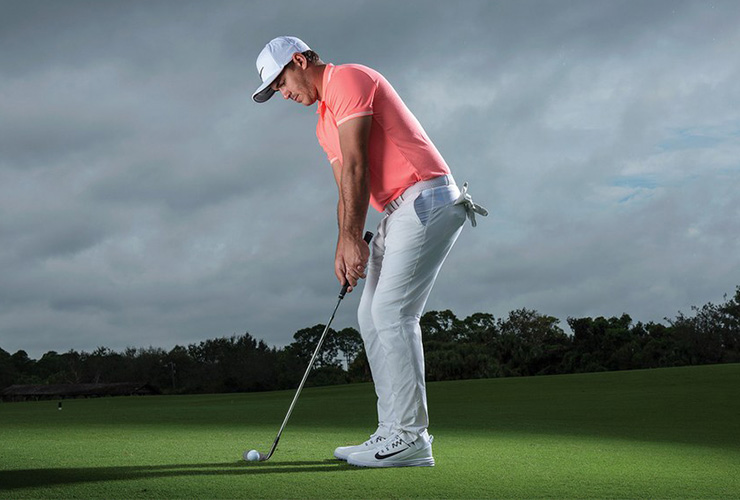 ‘I STAND MORE UPRIGHT THAN USUAL AND SOLE ONLY THE TOE OF THE WEDGE ON THE GRASS.’ CHIP AGAINST THE GRAIN

Augusta grass might look perfect on TV, but up close the lies are frightening. Miss a green, and chances are you’ll end up in a hollow where the grain of the fairway grass is mowed against you. Anything less than a perfect strike, and the grain will catch the wedge’s leading edge or heel. Result: you stub the chip.

You might laugh because it doesn’t exactly look sexy, but I’ve discovered an effective method to protect against the stub. I stand more upright than usual and sole only the toe of the wedge on the grass (above). With the heel off the turf, there’s no way it can catch. I then close the clubface a bit so it’s pointing left of my target. It looks like the shot is going to go left, but trust me, if you make a normal chipping stroke you’ll be surprised at how straight the ball starts. It just pops right up (below). You can hit it high or low, and with any club you’d use for chipping.

Not sure about the grain’s direction? Doesn’t matter. Use this method whenever you sense a stubber coming. 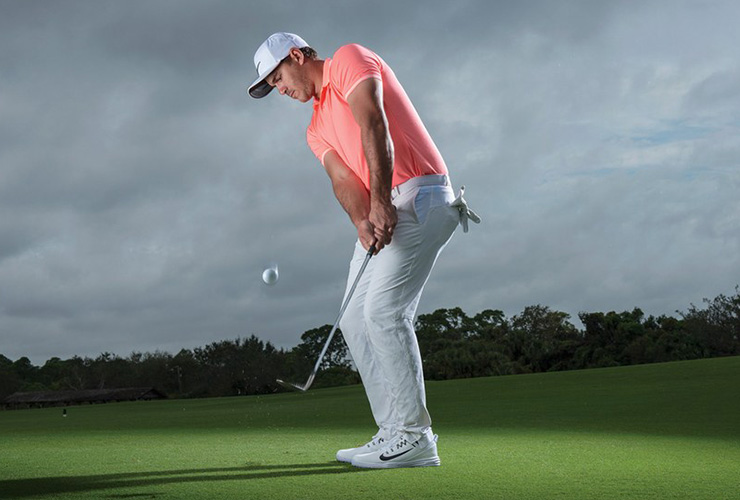 TRICKY LAG
The greens at Augusta are so fast with so much swing, it’s almost impossible to explain to anyone who hasn’t played there how difficult they are to putt. Nowhere else do you see four-footers that break three cups. You have to hit the short ones with authority, but to even get those, your lag putting needs to be dialed in—and these greens don’t make it easy. Here’s my favorite practice drill for speed control:

My best score is 19 consecutive putts between the coins. If you want it to get really difficult, set them on a downslope or putt from a longer distance. You’ll learn never to leave a putt short. That’s a skill that travels anywhere.