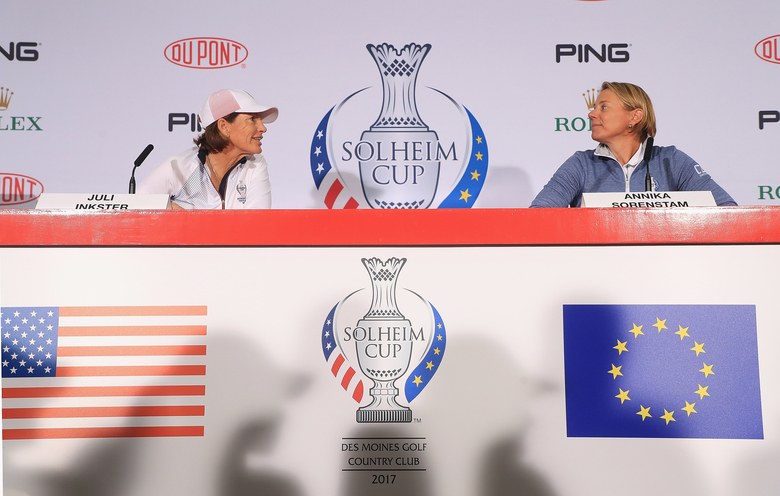 By John Huggan
The teams for the 15th edition of the Solheim Cup matches will both reflect fresh blood and a fresh start when the United States and Europe line up at the Des Moines Country Club, Aug. 18-20. The home side will sport three Cup rookies, with the Old World team debuting four new players in the biennial contest.

Both captains made it clear how difficult it had been to arrive at their respective conclusions. Inkster omitted the likes of former U.S. Women’s Open champion Paula Creamer, as well as six-time Cup veteran Angela Stanford and five-time player Morgan Pressel.

“This has been a really tough day,” said Inkster, herself a nine-time Solheim participant. “I don’t know if there’s ever been so many people in the running for two captain’s picks. I could have gone a lot of different ways. But in the end I went with my gut, and who I thought deserved a chance to play. I hope it turns out OK. That’s all I can say.”

Noticeably absent from the European squad will be Catriona Matthew, who was looking to make her ninth appearance in European colors. The Scot will still make the trip to Iowa, however, as one of Sorenstam’s assistant captains.

“It is always hard to say ‘no’ to someone who lives for the Solheim Cup,” said Sorenstam of Matthew. “She was involved in the plans and knew the players we were talking about and that made it a bit awkward at times. But she has been strong and mature, and I am happy to have her on the team either way.”