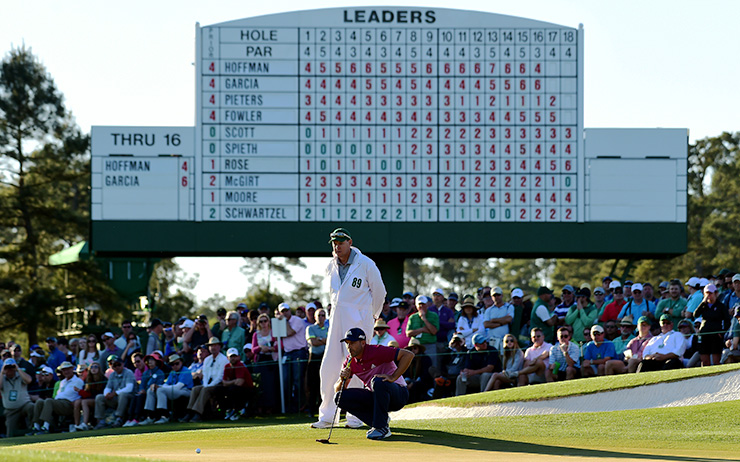 Sergio Garcia will try to end his 0-for-73 record in major championships when he takes a share of the lead into the final round of the 2017 Masters. Garcia will play in the final pairing with Ryder Cup teammate Justin Rose at 2:45 p.m.

Playing in the group in front of them all day will be the American duo of Jordan Spieth and Rickie Fowler. Like Garcia, Fowler will be trying to win his first major. Spieth will be trying to win a second green jacket just a year after blowing a five-shot lead on the back nine. The star-studded final four are all in the top 14 of the Official World Golf Ranking.

First-and-second round leader Charley Hoffman will be in the third-to-last group with Ryan Moore, who earned the winning point for the U.S. at the 2016 Ryder Cup. A pair of green jacket winners, Adam Scott and Charl Schwartzel, will be in the group in front of them.

Phil Mickelson, after getting to three under after his opening two holes on Saturday, will have a disappointingly early tee time with Bill Haas at 12:35. After his hot start, Mickelson shot 74 to fall to T-21.

Also of note, Rory McIlroy and Matt Kuchar will tee off at 1:45 p.m., and four-time major champ Ernie Els will play with local legend Jeff Knox in the first pairing at 10:05 a.m. It will be the second consecutive day that Knox, an Augusta National member who plays as a marker when an odd number of players make the cut, will play with a former world No.1 after he battled with Jason Day in the third round.

Here’s a look at all of Sunday’s final-round pairings and tee times (all times US ET): NOTE: DUBAI IS 8 HOURS AHEAD OF AUGUSTA TIME