By Stephen Hennessey
Previously known for his prodigious length and elite ball-striking, Gary Woodland’s career-defining victory at Pebble Beach puts the 35-year-old into a new category. His 13-under total at the 2019 U.S. Open bested Brooks Koepka by three shots, preventing Koepka from becoming just the second player to win three consecutive U.S. Open titles. Woodland’s first major title and fourth career PGA Tour win puts the Kansas native in some elite company as he became just the 12th golfer in the world to win a major over the past four seasons. Here are a few things you need to know about the 2019 U.S. Open champion.

1. Woodland is one of the longest drivers in golf—and he used to be even longer. 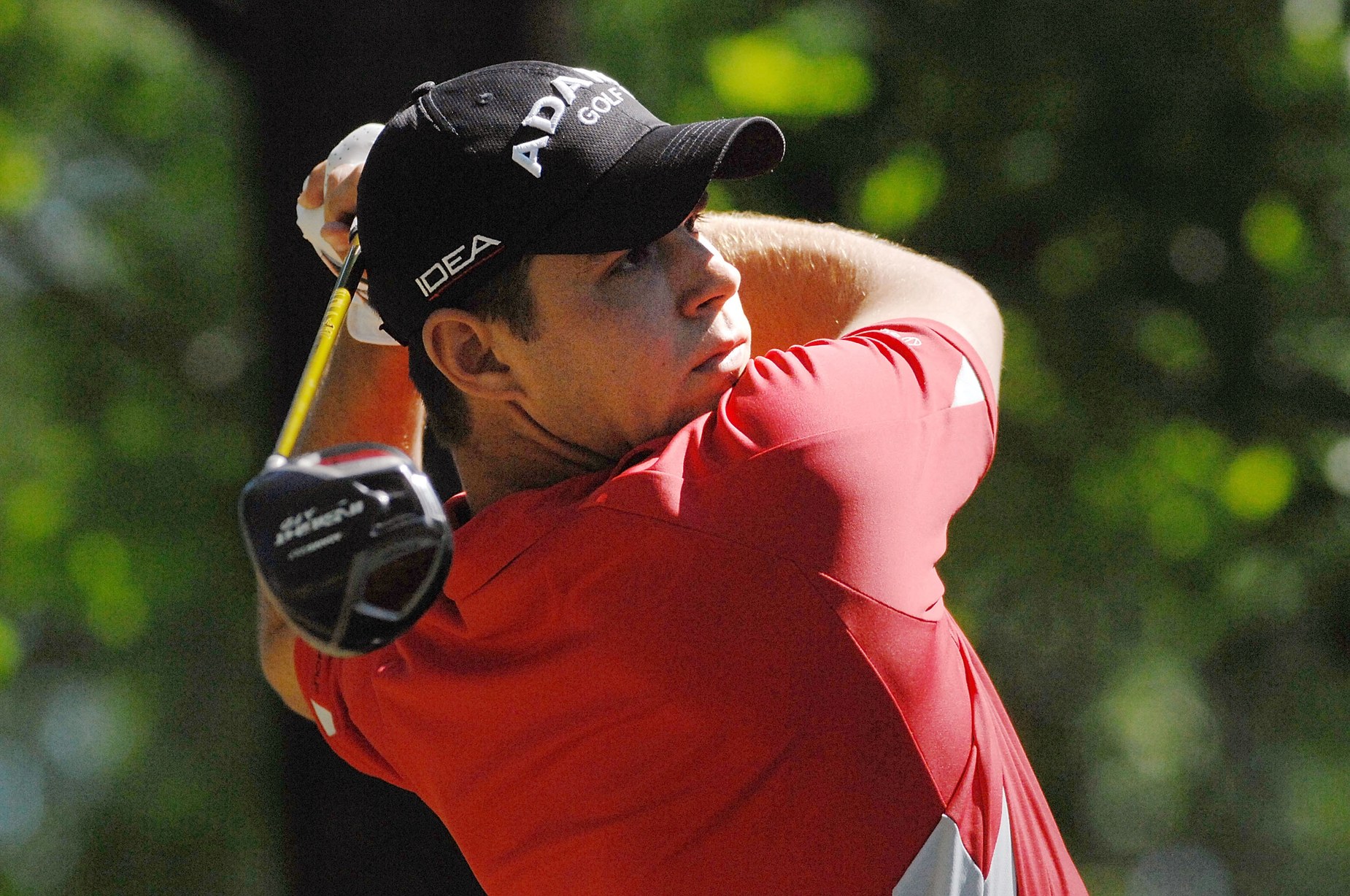 2. There are some legendary stories about Woodland’s distance—dating back to college.

Our Ryan Herrington profiled Woodland back in 2007 during his senior year at Kansas and wrote about how Woodland could routinely hit 400-plus yards drives—even hitting one 430 yards on the practice range at the school’s home course, Alvamar Golf Club. “The thing makes a noise … it sounds like a shotgun,” Kansas coach Ross Randall said. “When he hits balls on the range, people listen, stop and then watch.”

3. Woodland was always a three-sport athlete.

At 16, Woodland was the shortstop on a Topeka youth team that won the AAU national title in Georgia. The 12-man squad included former MLB relief pitcher Joey Devine. “I loved baseball, and I was the best at basketball. Golf was sort of third on my list.”

4. He pursued basketball in college, but that didn’t last long. 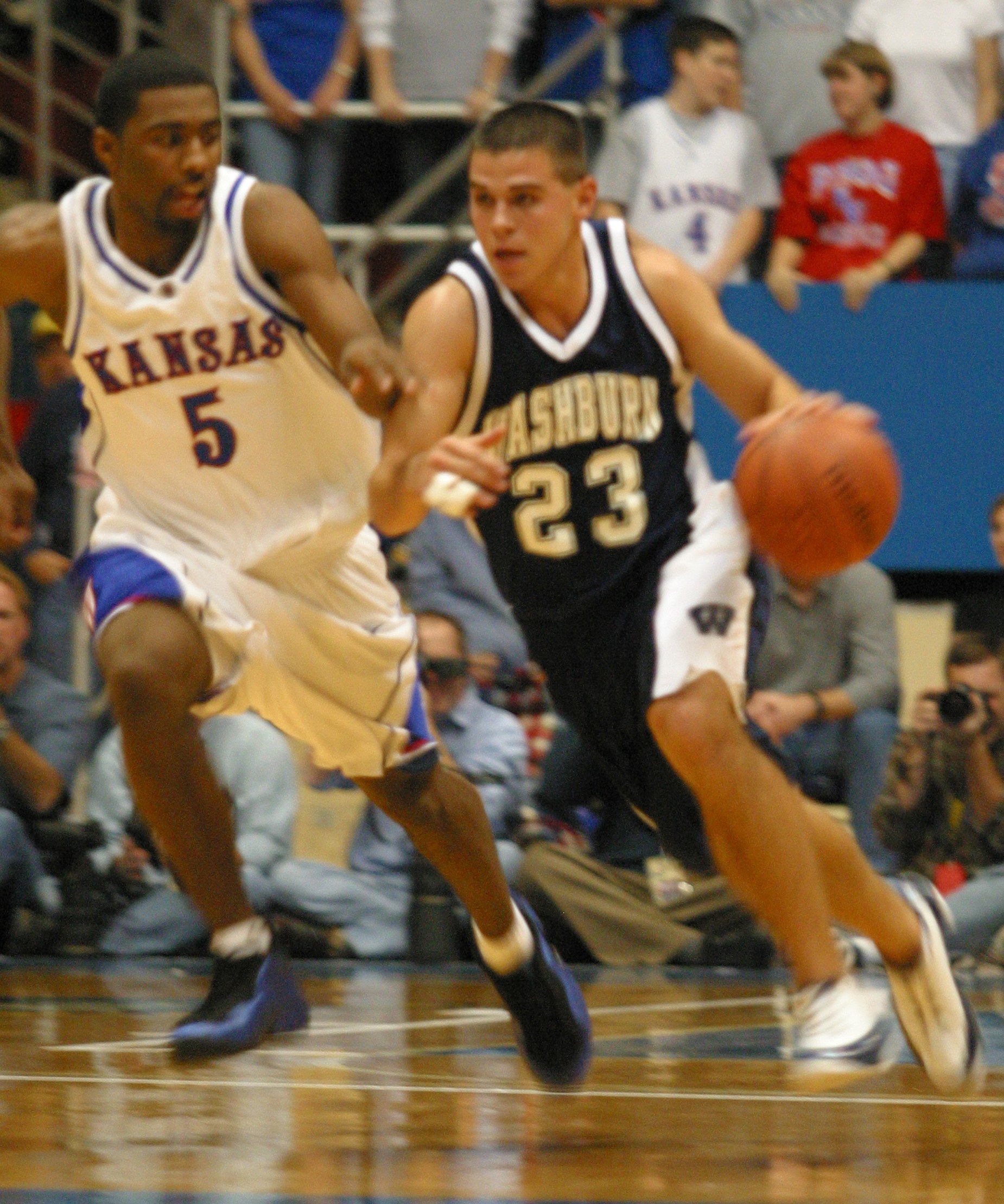 Courtesy of Washburn University Athletics
Gary Woodland drives against Wayne Langford in an exhibition game against the Jayhawks his freshman year.

After winning two state titles for Shawnee Heights High School, just outside Topeka, including scoring 26 points in the state final game, Woodland earned a basketball scholarship at Washburn University in Kansas, and during a game against University of Kansas at Allen Fieldhouse his freshman year, the lifetime Jayhawks fan described trying to guard former NBA guard Kirk Hinrich as the moment he realized he wasn’t quite on the level to excel in college. Woodland transferred to the University of Kansas to play on its golf team, as Randall had offered him a scholarship in high school to play for the Jayhawks. “I always wanted to play at the highest level. I didn’t care what sport it was; I just wanted to play at the highest level.” 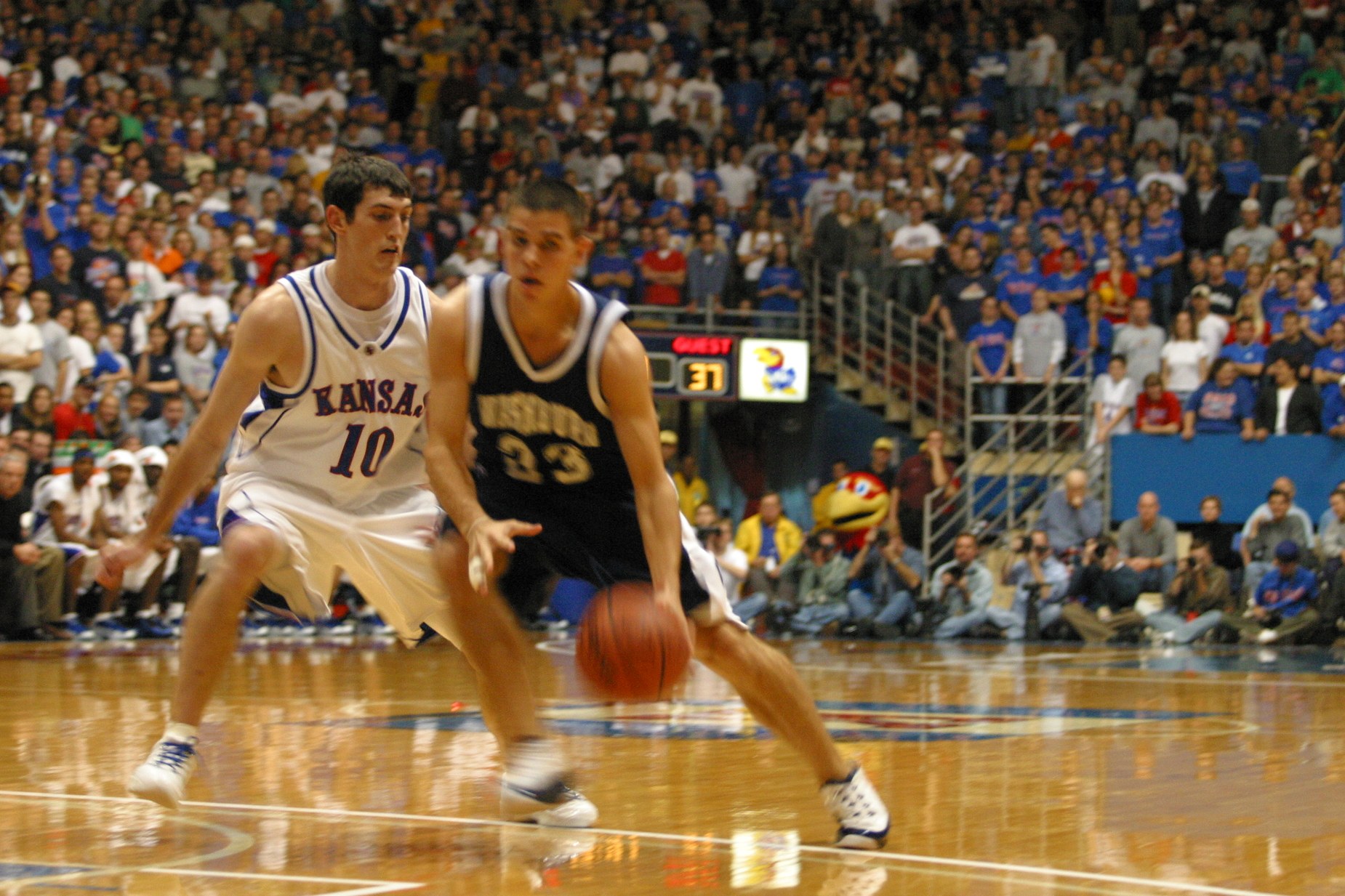 Courtesy of Washburn University
Gary Woodland credits future NBA guard Kirk Hinrich for showing him that he didn’t have the basketball skills to hack it on the collegiate level.

5. It took Woodland a few seasons before he turned into a world-beater at Kansas.

It wasn’t until the 2005-06 season that Woodland’s game started living up to his potential. His stroke average dropped from 74.24 his sophomore season to 69.87 in the fall of his junior year. And he won three collegiate events his senior season, as he was considered a contender for the men’s college player of the year award. 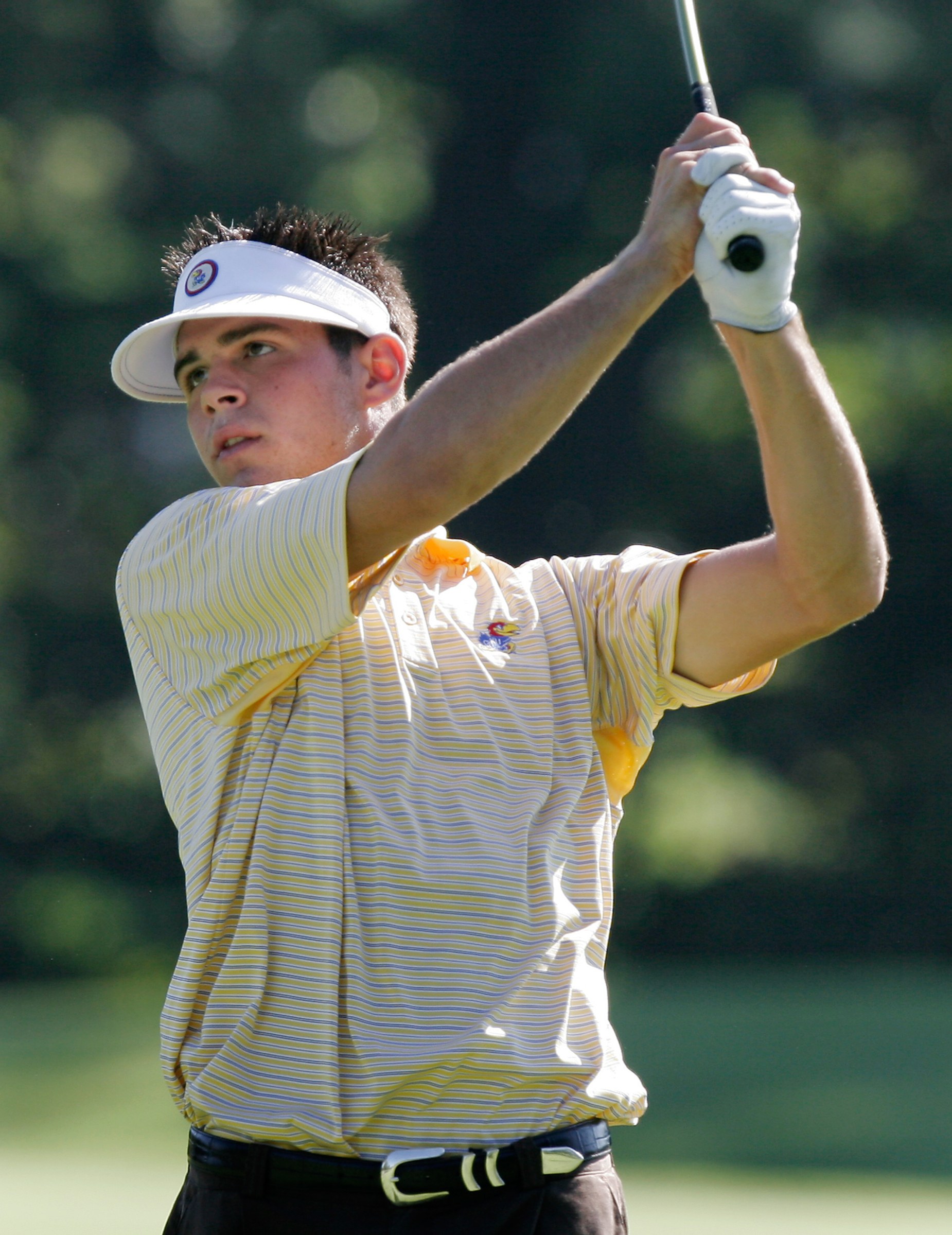 6. Woodland started working with Butch Harmon in 2012, after years with mentor Randy Smith.

Butch and Woodland had a bit of a golf boot camp that January in 2012. As he told Golf World in 2014: “They worked six to seven hours a day at Harmon’s golf school with Woodland hitting so many balls as he tried to turn his cut into a draw that his hands bled and his wrists ached.”

7. In 2012, a cyst ruptured on Woodland’s wrist at the Masters, causing him to WD from the Masters.

Woodland sought out four specialists and took “cortisone shot after cortisone shot” to attempt to play through the injury, which he did until the cyst on his left wrist ruptured, causing him to withdraw after a third-round 85. 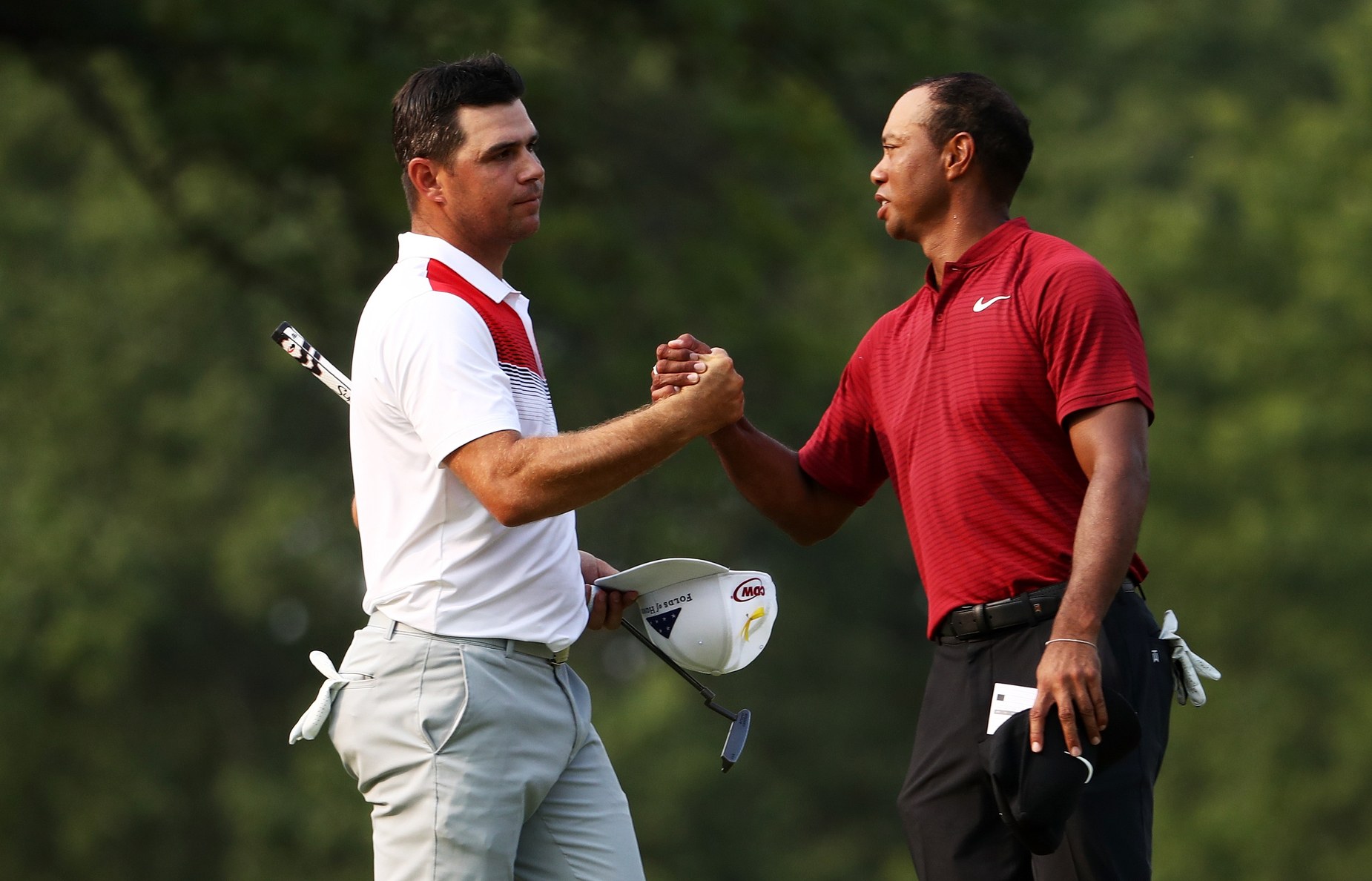 (Photo by Jamie Squire/Getty Images)
Gary Woodland and Tiger Woods shake hands after finishing on the 18th green during the final round of the 2018 PGA Championship at Bellerive.

8. It took time for him to find a successful formula in major championships.

9. Woodland did what he never could do before at Pebble Beach. 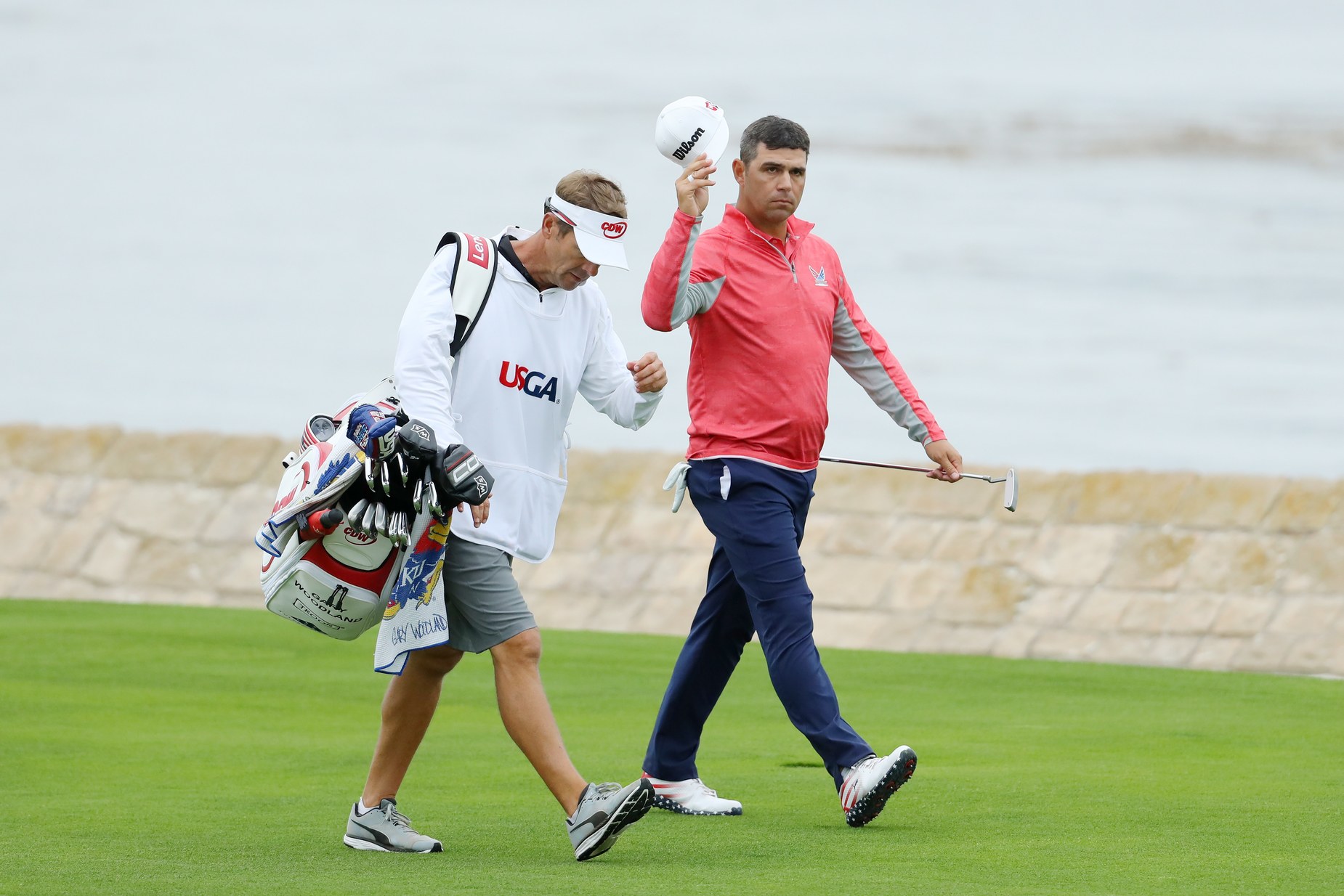 Woodland specifically credited Little for pushing an aggressive strategy all week, particularly on the par-5 14th hole on Sunday, when Little persisted that Woodland hit 3-wood. For a long time previous to Little, Woodland had tour veteran caddie Tony Navarro on the bag for a long time.

RELATED: Pebble Beach brings out the best in Gary Woodland—and the U.S. Open

11. Woodland’s work with Pete Cowen enabled him to hit the U.S. Open-clinching shot on 17.

He hit one of the best shots you’ll see at Pebble Beach—using a wedge on the green at the 17th hole to secure the win.

As he told Golf Digest for an upcoming instruction piece about his work with Cowen: “The biggest change is to set the shaft more vertical at address—a lot less lean toward the target—and hold it more upright so the heel of the wedge comes off the ground. I also stand closer to the ball and grip down.”

12. And Woodland’s transformation on the greens might be most impressive.

At Pebble Beach, Woodland gained 8.3 strokes/putting on the field en route to his victory. To put that in context, his rank in strokes gained/putting in previous seasons:

Woodland credits his work with putting guru Phil Kenyon, who Woodland started working with last July, for taking the tension out of his pre-putting routine.

13. A part of the PGA Tour’s most viral video ever, Gary Woodland was outshined by Amy Bockerstette.

You’re likely one of the almost 25 million views on the video from the Waste Management. On Tuesday after the U.S. Open, Woodland surprised Amy on the set of The Today Show, as the duo were reunited.

U.S. Open champ @GaryWoodland stopped by to surprise Amy Bockerstette, one of his biggest fans who cheered him on during his big win.

“The world needs a lot more of Amy in it. Her attitude, her energy – it was contagious. I thought a lot about you on Sunday.” pic.twitter.com/WXTr6c1Sim

Definitely the biggest Win of my life

He and his wife, Gabby, were expecting twins back in 2017, but she lost one of the babies in a miscarriage. Their son, Jaxson is now almost 2 years old. And the Woodlands are expecting a set of twins this coming August.

Wishing everyone a Merry Christmas from the Woodland’s