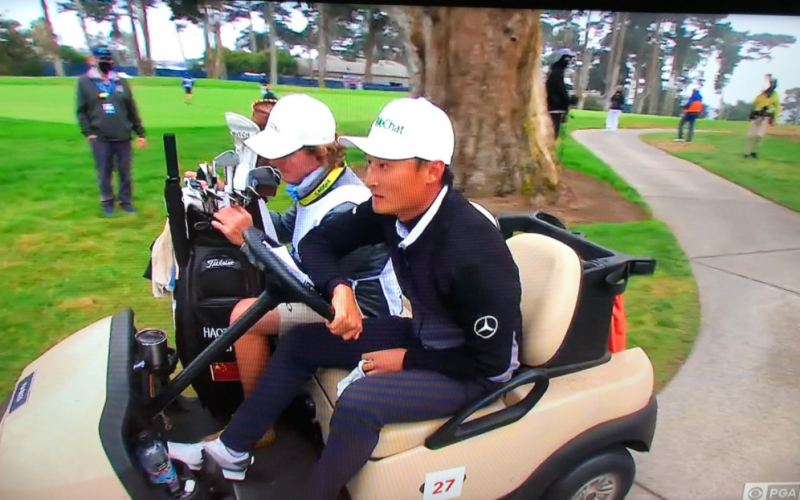 By Alex Myers
The third round of the 2020 PGA Championship provided those on the East Coast with some spectacular prime-time golf from San Francisco’s TPC Harding Park. But these days you can’t just “watch” golf on one screen. So to help recap all the action from an eventful—and long—Saturday, we tracked down 13 tweets that also told the story.

Justin Thomas and Jordan Spieth drew most of the attention early as a star-studded pair of major champs. Little-known fact, but the two are also best buds. Although, you might question that after the drubbing JT delivered to his longtime friend. Thomas was disappointed with 68 after birdieing five of his first seven holes, but he still beat Spieth by eight shots.

Lmaooo Spieth has had enough pic.twitter.com/uRihFR8j7w

RELATED: Spieth and Thomas are two friends who are worlds apart

Needless to say, Spieth won’t be completing the career Grand Slam this week. … Another day, another poor putting performance for Tiger Woods with that new putter. Here was his reaction to finally making a putt—for par—on the 14th hole:

Phil breaking down his coffee recipe in the middle of the PGA Championship is as Phil as it gets . . . #phil #philmickelson #philbeingphil #coffee #recipe #pgachampionship

OK, so that’s an Instagram and not a tweet. So sue me. Rory McIlroy and Brooks Koepka their worth as pitchmen earlier in the week, but Mickelson is still in a class by himself when it comes to giving his sponsors the most bang for their buck. But Phil’s best performance came later with an extended visit with Jim Nantz and Nick Faldo in the 18th tower. There was this awkward moment:

Phil Mickelson dropping in for some analysis this afternoon; Nick Faldo wasn’t quite ready for his opening dad joke pic.twitter.com/tNycbpWCeL

But overall, Mickelson was awesome.

The 36-hole leader, Haotong Li, had an interesting day. Well, really, an interesting couple holes on 12 and 13. After getting two of the luckiest breaks you’ll ever see on 12 and taking advantage with a birdie, his tee shot on No. 13 rattled into the trees … and didn’t come down. Li struggled after that and will enter Sunday four shots back.

The golf gods giveth, and the golf gods taketh away… #PGAChamp pic.twitter.com/4vPi0tLEkO

Yep, I used my own tweet. Again, sue me. It’s late. Speaking of watching golf in prime time, there was so much to see—unless you were a Tommy Fleetwood fan.

Has Tommy Fleetwood been locked in a Portaloo? Completely disappeared from the coverage

There are plenty of players in the mix to win major No. 1, however, including Cameron Champ.

What happens if Cameron Champ goes on the Bryson bulking + speed plan? Does the golf ball explode?

With all due respect to Bryson DeChambeau, Champ is the PGA Tour’s distance champ. That being said, Bryson pulled off a different type of bomb on the 18th hole, rolling one in from San Diego:

Bryson has a great chance to beat his best major finish (T-15)—and perhaps, even hoist golf’s biggest trophy. But he’ll have to overcome a bunch of guys, including a younger Californian, Collin Morikawa, who made the biggest move (up 21 spots) on moving day.

How big a stud is @collin_morikawa gonna be… scratch that… already is??? @PGAChampionship ⛳️ kid is on 🔥 pic.twitter.com/d2pXtpJajZ

Reminder: This is his first major as a pro. And a win would mean he’d have as many majors as cuts missed on the PGA Tour since turning pro. Crazy.

Oh, and speaking of young GUNZ, Scottie Scheffler played himself into the final group on Sunday.

But they’re all chasing Dustin Johnson, who shot 65 with a double bogey to get to nine-under. The same Dustin Johnson who couldn’t break 80 a few weeks ago.

Dustin Johnson within the last month went 80-80 to miss the cut at the Memorial then 78-WD in Minnesota.

8 birdies today and leads the PGA.

Now he holds the 54-hole lead a major. But a familiar face is lurking a couple shots back …

Koepka, talking about the guys on the leaderboard tomorrow: “DJ’s only won one.”

Yeah, this thing is probably over.