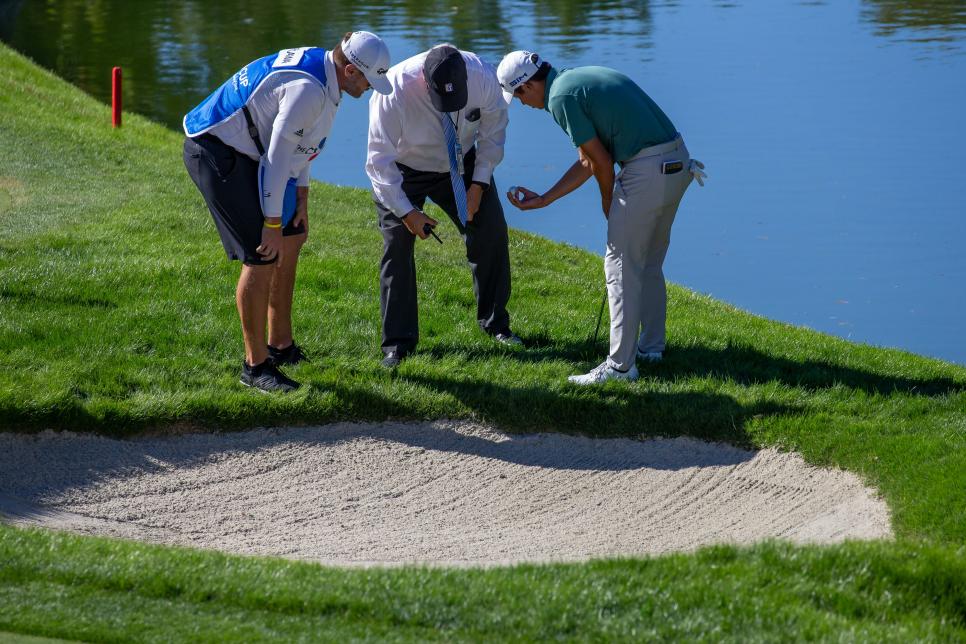 Icon Sportswire
A PGA Tour official (centre) works with Colin Morikawa and his caddie discusses a ruling during the 2020 CJ Cup at Shadow Creek.

By Ron Kaspriske
You hear it all the time when you’re watching golf broadcasts on TV. A player whose ball is in a seemingly awkward spot asks to speak to a rules official about the situation and what options he or she can take. Suddenly, the player is getting relief, and viewers at home are wondering what’s going on. Announcers then explain that the players aren’t doing anything suspect or improper. Rather, they’re taking advantage of the fact that they have a thorough understanding of the rules and know there are certain instances when they can benefit from them.

Indeed, while you might not believe it after watching your tee shot clank off a sprinkler head and bounce out-of-bounds, the Rules of Golf often can be your friend. It’s especially true since several major rule changes went into effect in 2019, when the USGA and R&A modernized the Rules book to help simplify the language and make it easier to understand and apply.

How can you take better advantage of the Rules of Golf? Here are 13 easy ways they can help you shoot lower scores.

You can ground your club in penalty areas. This was one of the biggest changes in the rules in 2019. You can now step into a penalty area (think water hazards) and take a few practice swings that touch the ground. You can’t, of course, do anything to improve your lie, but you can get a better feel for how to play your next shot. You still might decide to take relief outside the area (adding a penalty stroke), but this new rule invites you to take more chances of advancing a ball without penalty.

You also can remove loose impediments in penalty areas. You’re allowed to clear those pesky stones away that might ding your wedge as you try to pitch out of trouble. Just remember that it’s a penalty if your ball moves as a result of removing a loose impediment, so proceed carefully.

You can remove stones before playing a bunker shot. So long as you don’t move your ball, it’s OK to move any loose impediments in the sand. No more worrying about turning a small stone into a ballistic missile. 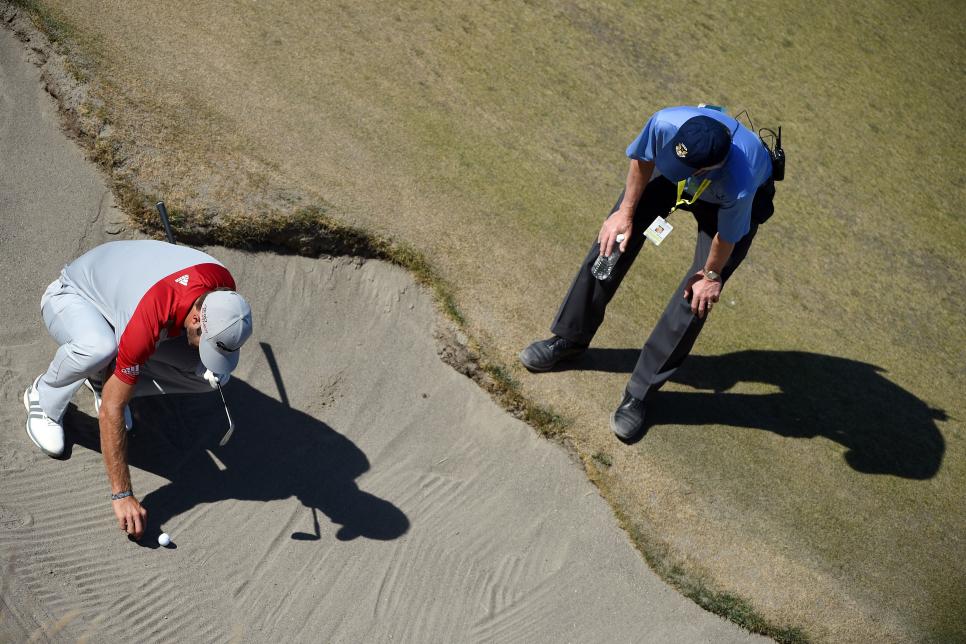 Ross Kinnaird
The Rules of Golf allows PGA Tour pros and recreational golfers alike to move stones and other loose impediments in bunkers without penalty.

You get free relief for an embedded ball in the rough. Before 2019, if your ball plugged in grass that wasn’t cut to fairway height or lower, you either had to try to hack it out or take an unplayable lie (and add a penalty stroke). If you’re playing on a rainy, muddy day, this new rule might come into play several times.

You can improve the conditions affecting your next stroke when fairly searching for a ball. Do you like to play golf in the fall? You might find your ball under a pile of leaves. There’s no penalty if the ball moves when searching for it (just replace it), and there’s no penalty if removing the leaves by the ball results in better conditions for your next shot. This includes a ball resting in a penalty area.

You don’t have to take a drop in the same condition. This isn’t always the case, but say your ball winds up so close to a sprinkler head or other abnormal course condition that you are entitled to free relief (because the condition interferes with your stance or swing). And say you’re ball is on the fringe or even the rough next to a green. So long as you’re within one club-length of the nearest point of relief, no closer to the hole, you can now play from a different condition than your ball currently lies—possibly even on the green! You also could go from the rough to the fairway if you follow these same guidelines. It doesn’t always work in your favour, but don’t assume if your ball is in the rough, you have to drop in the rough. 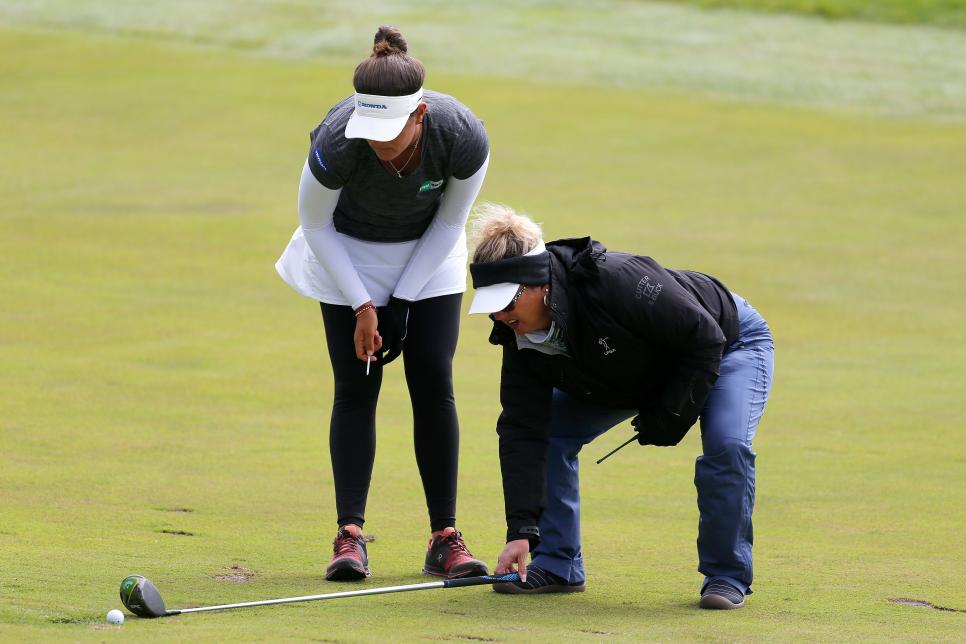 Golfers are entitled to a club length relief from a sprinkler head or other abnormal conditions. And sometimes that relief can even allow you to play from different conditions, letting you move the ball out of the rough or even on to the green in certain circumstances.

You don’t have to play from a bunker. Again, you’re probably too good to need this rule, but some golfers would spend the better part of the day trying to hit a ball from the sand. To save time—and likely a stroke or two—they can drop outside the bunker based on a reference line that extends straight back from the hole through the spot of the original ball in the sand. They can drop as far back on that line as they want, but this option comes with a two-stroke penalty. 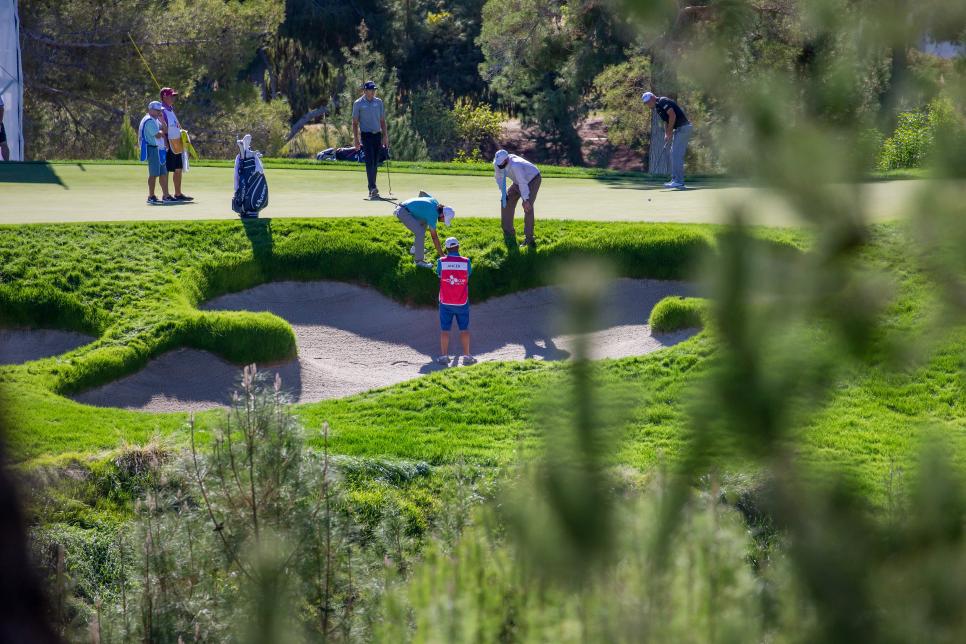 Icon Sportswire
Abraham Ancer checks his ball placement with a PGA Tour rules official during 2020 CJ Cup. If a ball is embedded in the rough, golfers are entitled to relief. If ball is embedded in a bunker, golfers can drop the ball out of the sand (while taking a two-stroke penalty).

You can repair nearly any damage on the green. This includes damage from cleats or spikes that might impact the line of your putt The only exceptions are aeration holes, natural surface imperfections or natural wear of the hole. Your ball deserves a truer roll.

You can touch the line of play on a putting green. If your caddie or partner wants to show you exactly where the ball needs to roll, he or she no longer has to hover a finger or club above the surface.

You might not have to reload after hitting it out-of-bounds. This is a Local Rule, so check first if it’s being used by your club, group, course, etc.—it’s meant for casual play. If it’s in effect, you can now drop a ball on the edge of the fairway, no closer to the hole, on a direct line from where your shot went OB. If you go with this option instead of reloading, add two shots to your score. That means if you hit a tee shot out, you’d now be hitting your fourth from the edge of the fairway instead of having to hit your third from the tee. It can save time and possibly a shot or two.

You can use a weather app. It’s still against the rules to use any devices that can gauge or measure wind speed and direction, but there’s nothing stopping you from opening up a weather app and checking the predominant wind direction and strength. It can help you decide when you’re in between clubs. It also can prompt you to get off the course faster when a storm is approaching.